[Editors note: Please read Above the Law: Violations of Women’s Reproductive Rights in Northern Sri Lanka by The Social Architects, which expands on this initial report and address the points made in the comments as well as in other web fora, including mainstream media which picked up on this article.]

This incident occurred on August 31, 2013 – at the Veravil government divisional hospital in Kilinochchi.  The affected women reside in Valaipaddu, Veravil and Keranchi[1] ; all three are coastal villages. On August 30, the hospital staff and volunteers attached to Veravil divisional hospital informed community members residing in the three villages that any woman with a child under the age of five should come to the hospital the following day to weigh their children and to receive a vaccination.

A forty-three-year-old woman told TSA members “the volunteer came to my house in the evening and asked me to come to the hospital with the “clinic card” to weigh my child who is under 5 years. When I told her that my daughter is in good health she said that the research team is coming from Kilinochchi district hospital and they know better. I thought it will be good to consult a specialist who is coming all the way from Killinochchi.  Little did I know what they were up to.”

Upon arrival at the hospital, the doctors and nurses used coercive language and manipulated medical information to convince the women to take Progestogen-only subdermal implants (POSDIs), a long-term hormonal birth control inserted under the skin of a woman’s upper arm.

Initially, all the mothers were opposed to the idea of accepting this new contraceptive. The nurses clearly explained to the women that, if they chose not to receive contraception, then they may not be able to receive any other treatment at the hospital in the future.

Another female teacher told TSA “there were a lot of people at this small hospital. There were only seventeen beds and the outpatient department could hold less than fifty people. They weighed my daughter and they recorded her weight on the card, but they didn’t return the card. I waited for two hours and I was anxious about my other daughter at home. They were speaking to the women for a long time and they were sending the women to the doctors inside after spending a lot of time trying to convince them of something. I saw women walking out of the doctor’s room with a big bandage. I got a bit worried. I got up and asked the nurse to give me my clinic card and they asked me to wait for a while. I waited for thirty minutes and then asked again. They got annoyed with me and asked me to come next. When I sat in front of them they asked me about my age and my reproductive health practices. They asked about my family planning practices. I told them that I use natural methods using my cycles. They laughed at me and said that I should not be getting pregnant at the age of forty-three. If I get pregnant I will give birth to a “deformed” child and I refuted that. I also told them that even though I delivered my two other children by “C” section I could have one more child. If I get pregnant that is God’s wish. I fought with them and the nurse sent me to her supervisor. I told her the same thing and this person was ruder than the previous one and I got a bit scared. I then told her that I should ask permission from my husband to undergo this procedure even though I didn’t understand anything they were saying. They told me that I won’t have children for five years.  They also told me that I will not have any side effects and that this is the best contraceptive method. I reiterated that I should get permission from my husband otherwise he will leave me. They told me to leave without the clinic card and come back with my husband’s permission. I refused and I told them that I can state in writing that I don’t want to get anything and that I would like to continue with the same methods I was using since my marriage. I wrote and signed a piece of paper and left with my daughter.

I didn’t see the doctor who was usually at the hospital. The previous evening he had come to our school and asked for big pots and pans, stating that lot of doctors are coming from Killinochchi to do some research. I don’t think he was aware of what was going on in his hospital”

After speaking with the medical professionals at the hospital, the mothers then said that without any information about this procedure, they needed to get permission from their husbands to receive the contraception. The nurses and other medical staff present responded that, if the women didn’t do what was being asked of them now, then their husbands would be brought to the hospital so that the procedure could also be performed on them. After hearing this, a lot of the women were compelled to accept. 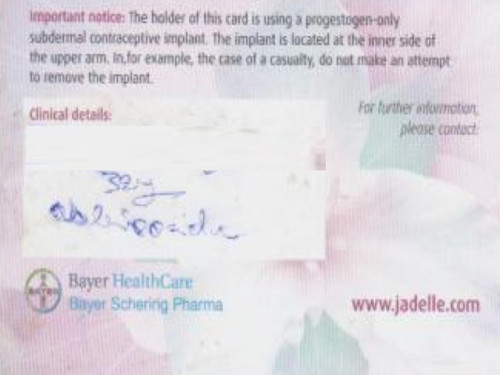 When the women went back home, and informed their husbands, the men didn’t take it lightly. (For example, a woman told TSA, upon returning home, her husband accused her of wanting to get the procedure done so that she could have an extramarital affair).

According to Veravil divisional hospital staff/volunteers, staff members got a call from Dr. Karthikeyan, Director of Health Services at Kilinochchi district hospital, the previous night. They were told that people would be coming from Colombo on August 31 to do research. Hospital staff had also been told they would need to cook for eighty people. The day this coerced contraception took place, hospital staff told TSA that most of them were preparing food and that the senior staff left for the hospital at 2PM. Since this is a very rural and economically marginalized area, it was even difficult to obtain enough utensils to cook for eighty people. People also noticed that a doctor attached to the hospital was supervising the cooking rather than attending to what was happening in the hospital. While the local hospital staff cooked, doctors and nurses from Kilinochchi administered the POSDI at the hospital. When the Veravil hospital staff had gone to their hospital all they witnessed was chaos. They saw something being injected in the arms of these women.

A thirty-six-year-old woman who underwent this procedure told TSA “my youngest child is eight-months-old and my older child is three-years-old. The health volunteers asked me to come with the clinic card to weigh my children. They also said specialists are coming from Killinochchi district hospital. I was excited to see big doctors who are knowledgeable. I went to the hospital and they weighed my children, but then they made us wait. When my turn came they spoke to me about the pros of not having any more children and told me that I am better off with only two children. I was of two minds and they sent me to the doctor. The doctor spoke to me nicely and told me that rich and educated people in Sri Lanka and America use this method. This way my two children will be better. How can I argue with such educated people? I hesitantly went ahead. But a few days later, I developed this pain and I went to the hospital. They treated me but I wanted to see the doctor who did this to me, but he wasn’t there. And the other doctor told me that he doesn’t know anything about this. The other doctor told me that I will be okay, but now I am not okay. How can these educated people do this to us? I wish they gave me time to think about this. They forced us to make a decision on the spot. I couldn’t speak to my husband or anyone that I knew.  These doctors are not nice people. They cheated me.”

Another twenty-eight-year-old mother of two children from Valaipaddu said they all gathered at the pre-school. She said, “All of us with children under the age of five were asked to assemble here with a clinic card. About thirty nurses, midwives, other health officials and a few doctors who had come from the Ministry of Health (MoH) in Kilinochchi district had come. They spoke to us about family planning and asked us to come to the hospital. Many of us went with them in their vehicle or ambulances and we were taken to Veravil hospital. They injected something on our upper arm. I trusted these doctors. We have never seen this many doctors. How can we say no to such educated people? This must be good for us and that is why they have done this to us. The only concern I have is that they should have told us what they were going to do the previous day when they asked us to come. They were a little dishonest with us.”

When TSA spoke to both medical professionals and others attached to Veravil hospital they didn’t have a clue of what Progestogen-only subdermal implants (POSDIs) actually were. They didn’t know anything about the side effects either. In addition, the women were given a card by those who administered the procedure. Yet the card was only in English.[2]

This coercive population control project violates myriad fundamental rights, reproductive rights, and basic notions of human dignity. After government health workers used false pretenses to gather the women at the hospital, the doctors and nurses failed to provide the women with information on the full spectrum of contraceptive choices. In violation of the women’s right to bodily autonomy, right to information, and right to reproductive autonomy, the doctors and nurses provided false and misleading information about the side effects and after-insertion care. In reality, side effects include hypertension, weight gain, irregular periods, hormonal imbalance, and venous thrombosis (clotting of blood vessels). The medical professionals failed to tell the women that the injectable can be removed at any time. Moreover, the information card the pharmaceutical company provides is in English; the women did not have access to information about this drug in Tamil. Furthermore, the section on the card labeled ‘For further information, please contact:’ is followed by a blank.

Women have a right to understand the benefits and potential side effects of all available contraceptive options that they may require at different stages of their lives. They have the right to accept or deny any form of contraception at any time. Removing the implant requires a medical intervention (unlike pills), therefore reducing the woman’s control over her reproductive self-determination. Contraceptive counseling with an emphasis on free choice is especially important in conflict zones where women already have fewer options, inadequate information, and limited access to primary health services including contraception. Misleading women into hospital visits, presenting false medical information, and the failure to ensure a woman’s right to make an informed, meaningful choice amounts to coercion and force – clear violations of women’s autonomy, well-being, dignity and bodily integrity.

What if a woman had reacted adversely to this procedure? Why did a district hospital director personally visit this very small hospital on a Saturday morning?

In post-war Sri Lanka, doesn’t a woman have a right to know the truth about what is going to be done to her body? Don’t women have the right to make an informed choice about their reproductive health?

TSA will continue to monitor this disturbing story.

[2] The medical card is attached.