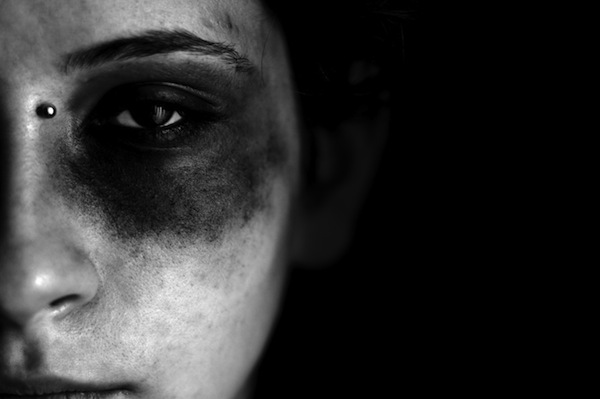 Two months ago I sat for my first year final exams at the Open University of Sri Lanka. Last month’s edition of the Hi Magazine showcased 3 pages of clothes from designer K.T Brown – modelled by me. And in December, I will be on Art TV – as a contestant for the Super Model of Asia Pacific 2011. I suffer from no grandiose illusions about myself. I am no super model. I am extremely uncomfortable in front of the camera and at age 26 have only just begun studying for my degree. Yet, every one of these steps is a huge achievement for me, for just over three years ago I was trapped in an abusive marriage. It was a marriage  that wore down every shred of confidence I ever owned – confidence I have struggled to take control of and own ever since.

It has never been easy for me to speak of what took place during those 5 years I was married, I don’t think I ever fully have. I mean to now, because I feel that my story, or some part of it, may resonate with someone out there – someone who may still be ignorant of her rights. It was youthful folly that led me to marry at the age of 18. It was ignorance that held me trapped for five years in marriage to a man who didn’t recognise me as an equal – a man who reflected attitudes and actions no different to many other men here in Sri Lanka. Don’t get me wrong – I am no feminist. I see no reason to burn the bra when all one needs to do is not wear it. I can only attest to what is true for me and to what is my reality.

I was recently at an event at which a Buddhist priest spoke. He told the audience that he ran a pre-school in Kalmunai and how he loved working with children. He mentioned that he was brought up in a Home for destitute children and said that when he saw children ‘ mahath dukak mata athivenava’ (a great sadness comes over me). It is this same ‘mahath duka’ I feel when I see women living lives they should not have to live. Sadness and anger. Anger at a system that makes it so hard for a woman to stand up for her rights, a system that doesn’t protect women, a system that discriminates against a woman and a system that casually accepts as normal all abuse against women.

I know what it is like to believe these lies.

I know what it is like to be locked out of the house, in the middle of the night, because he felt he could do that to you and to be crouching in fear and shaking with tears. I know what it is like when all the adults that surround you tell you that time will heal all wounds, or that he will change with time, or that you should be patient, when all you really want is for the abuse to stop. How many other women are in the same predicament today? How many women are being advised to be patient, to ‘bow’ their heads, to stay for the sake of the children? How many are being told to be careful with what they say to their husbands, to refrain from angering him, to pray, to go to church, to write in a diary, to ask forgiveness for sin, to put their lives right in the sight of God, to make pujas? How many women are – in addition to the beating they are getting from their husbands – beating themselves up by taking blame and responsibility for wrongs that are not theirs? How many women carry this guilt with them their entire life? And how many know that they don’t have to?

There is serious dearth of education and mainstream conversation on the topic of violence against women. And we that refuse to speak only contribute to it. Domestic violence is portrayed in images of black and white, in symbols and signage – but why do those of us with a voice not speak? We the middle and upper English speaking classes like to comfort ourselves with the idea that violence against women is a distant reality affecting only the uneducated and poorer classes. However, the harsh truth is that violence against women exists everywhere, in every class and in most homes. Yet many of us hide behind the cloak of shame and refuse to speak.

Young men reading this, ask yourselves if you have not seen your father make your mother cry, or your father hit your mother. Young women, ask yourselves whether, if you do not throw yourselves into a social life that keeps you away from home for as long as possible, you can deal with the way your mother lives or at how abusive the father you love can be to her? Yes, there are exceptions, but I speak not for them or of them, I speak for all those of you in the system – being abused now, today, to all those of you watching someone else being abused now, today. I speak even to men who speak of equality for the sexes and yet shun the idea of counselling, couple therapy, anger management and a host of other tools that can be used to create an equal platform that can be the foundation for the relationship you share with you partner. I speak to you – should you too not speak up? Should not this kind of behaviour and attitudes be labelled with a clear NO?

How many mothers stay in unhappy marriages for the sakes of their children and bring up children that can’t discern between the right and the wrong they see happening in their homes? How many women tell their sons that they must treat women right and then allow their husbands to walk all over them? Unless there is some bravery, some balls on the side of the women themselves, this cycle of abuse will continue. Sons will grow up to mistreat their women (whatever their true intentions may be) and daughters will grow up vowing never to marry. Marriages will fail and children (like mine) will have broken homes. But the question worth asking is – how much less broken is a home with an abusive father to a home in which there is no father at all? Not much less.

I am only coming out with parts of my story because I am today, older, wiser, stronger. But there must be more conversation, more acceptance, more support much less tolerance for domestic violence. Sri Lanka has a long way to go. The system of justice is marked with delays, administrative failures, bribery and corruption. It has been three years since my marriage ended and I am yet to get the justice I seek. The legal system needs to strengthen and we need lawyers with integrity – lawyers that will demand an end to the bribery and corruption that goes on within the courts. We need counsellors that will counsel with a conscience, we need women to understand that an education can get them a job that can give them financial independence. We need trustworthy childcare systems and a trustworthy police force. Yes, we are a long way away from it all.

But today, I spoke up. And tomorrow I hope you will. And maybe the day after tomorrow more people will speak up and in the next generation our children will benefit from it.

Being a young single mother in this country hasn’t been easy. I feel judged all the time! Not having a man ensures that I am an easy target to three-wheel drivers, baas’s, unscrupulous tuition teachers, dirty policemen, harsh neighbours, school principals – the whole lot. I have come to realise that the hardest thing a single woman or a single mother faces is social stigmatisation.

This is an edited version of an essay that first appeared in 16 Days Campaign Blog, a platform curated by the Women and Media Collective.