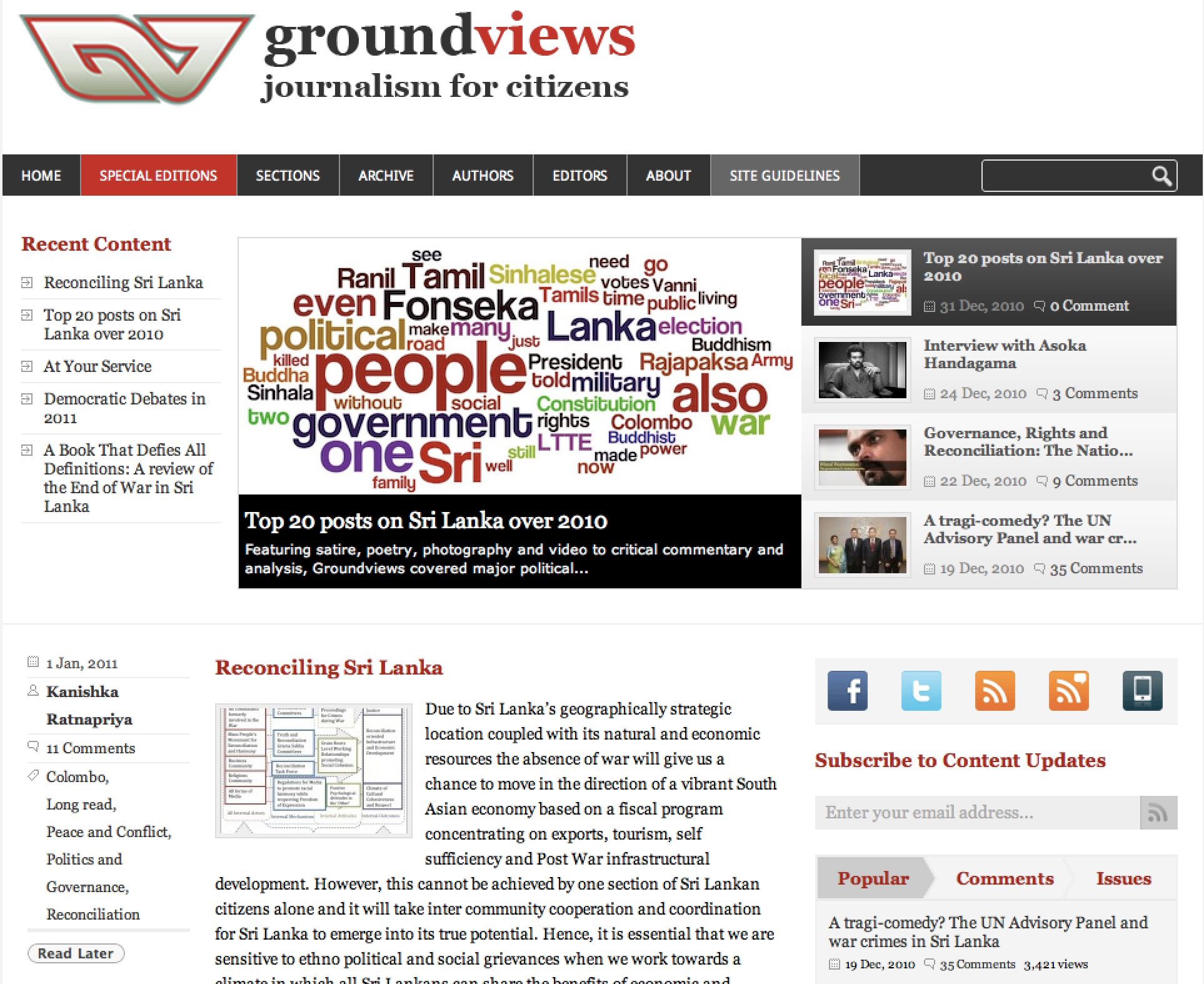 Groundviews is a citizens journalism website based in Sri Lanka. The site uses a range of genres and media to highlight alternative perspectives on governance, human rights, the arts and literature, peace-building and other issues.

Guiding principles
Our idea of citizen journalism and content herein adheres to that which is outlined here.

Our vision
To demonstrate, by example, that citizen journalism can enable civil, progressive and inclusive discussions on democracy, rights, governance and peace in Sri Lanka.

This site was the first attempt in Sri Lanka to create a means through which citizens in civil society could pen their own perspectives of life in conflict zones, call attention to humanitarian emergencies, give information on security / ground conditions and present alternatives to the status quo. The site is also a forum for critical debate, including academic commentary anchored in ground reality that would or could not find expression in traditional / mainstream media in Sri Lanka today. It is also a site for new media innovation, demonstrating by example how web and mobile platforms, apps and technologies can, inter alia, bear witness to violence, document rights violations, record corruption as well as stories of resilience, courage and hope.

Funding and support
Groundviews was set up under the Voices of Reconciliation Project, conducted by the Centre for Policy Alternatives (CPA) from 2005 – 2006, funded by CIDA and AusAID. From February 2007 to late 2009, Groundviews did not receive any funding from local or international sources. From late 2010 to the end of 2013, core operational costs were met by funding from Ford Foundation. The Centre for Policy Alternatives is the institutional anchor for Groundviews, since its inception. Funding since 2013 noted below,

International recognition
In December 2007, Groundviews was awarded an Award of Excellence in New Communications from the Society for New Communications Research. It is the first and to date only civil society and media web initiative in Sri Lanka to have won a competitive international award for excellence in journalism and media. “Groundviews exemplifies the mission of this awards program: the successful and innovative use of new communications solutions and social media practices to enhance communications and relationships” commented Mike Manuel, SNCR Best Practices committee chairman.