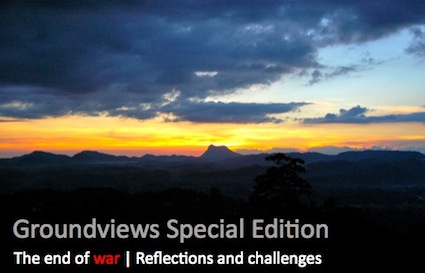 One year after the war ended, when Groundviews invited contributors to contest and complement our understanding that peace is not just the absence of war, or the defeat of the LTTE, we did not expect the response we received. Over the next week, we will publish close to 80,000 words and content from over forty different authors, in prose, verse, photography and video. A leitmotif through all contributions is that a government supremely adept at winning a war is outrageously inept at winning peace. The authors, including former senior diplomats and civil servants, internationally renown, award-winning poets, gifted photographers, academics, economists, bloggers, novelists, human rights activists, diasporic commentators and others celebrate war’s decisive end, but flag much that risks a hard won victory, including the continued alienation of Tamil aspirations, the predominance of dynastic rule over democratic governance and the lack of progress in addressing underlying grievances that gave life and succour to the idea of Eelam and the physical manifestation of the LTTE.

Bearing witness is never fully objective, never completely impartial. We have few narratives that, with the same vigour as the criticism of government, interrogate the manic violence of the LTTE throughout its sordid history and, in particular, towards the end of war. The documentation of this significant violence, in recent reports from the International Crisis Group and Amnesty International, amongst other local and international human rights groups, is a terrible record of a liberation movement gone very wrong, and ultimately, that orchestrated its own, tragic demise. However, our bias, evident since the inception of this site, is that elected governments â€“ our representatives, our servants – must and can be held to higher standards of accountability. It is the government that now has to win back the hearts and minds of those once under the jackboot of the LTTE. It is here, as many of the contributions record, that on a number of fronts â€“ from the political to the symbolicâ€“ it has failed post-war and disturbingly, shows little signs of improving.

One would think that the end of war would have created ideal conditions for restorative justice, reconciliation and democracy. These remain ideas without traction, and calls for the accountability of actions by Sri Lankan security forces still risk the frothing ire of key figures in government who stand far removed from democracy’s core values. This grave risk to the domain of independent ideas and free debate exists even though we are ostensibly at peace, and a mainstream media under the shadow of Prageeth Eknaliyagoda’s enforced silence is, even post-war, still not one able to fully critique the status quo.

There are contributions here that question the opposition to war, given its final outcome in wiping out the main obstacle to peace. Others concur, and suggest that the delay in securing a just peace (a peace more than the absence of war, also called a positive peace) does not in any way delegitimize the war against the LTTE, which was necessary and inevitable. Many contributors flag the absence, or more accurately, the misdirection of political will in securing a just political solution to underlying grievances. As Dayapala Thiranagama in his contribution avers,

Even though, the Tigers’ utopia of a separate state was buried with them at Vellamullaivikkal, even though their guns fell silent on 18 May 2009 the likelihood of their dream resurfacing cannot be ruled out unless there is a political solution within a united Sri Lanka that can restore the Tamil community’s dignity and respect.

Many struggle to re-imagine our country after war, noting that three decades of violence has stunted not just the ability and willingness of government to democratically govern, but also of many Sri Lankans to recognise, and stand up for fundamental rights that are integral to democracy. Poetry and photographs, from award winning contributors, succinctly and emotively frame the hopes and fears of communities coming out of war. Another contributor interrogates the public perceptions of a soldier, suggesting that though it is easy for us to condemn, it may not always be easy to unquestioningly comply. From perspectives of Jaffna Tamils to university students, from the realpolitik and constitutional to the existential and inspirational, from a gendered critique of war and its end to a detailed report on the situation in the Vanni today, these essays provide compelling snapshots of Sri Lanka a year after war ended.

This special edition is close to our heart, and since the launch of Groundviews in 2006, represents the highest and most diverse concentration of media and content published over the course of a week. It is a compelling record of critical voices and features content mainstream media in Sri Lankan will tellingly, to date, not dare publish or broadcast.

We cordially invite and strongly encourage your responses complementing and contesting vigorously the content that follows. We do not believe we know all the answers to achieve and sustain a just peace. However, we strongly believe that it is only through vibrant and civil debate, without fear of violent physical or verbal reprisals, that we can engender a just peace and a timbre of democracy we so richly deserve after war’s end.