About 10 days ago, a video surfaced online of an unmasked and ungloved policeman stopping and arresting some men in a trishaw on a road in the dead of night. Among these men was none other than IUSF convener and speaker Wasantha Mudalige, well-known student activist and figure that the author has seen and heard speak while covering protests related to the Kotelawala National Defense University (KNDU) Bill. Mudalige and seven other student activists were arrested over a protest that happened on August 3 outside of the Parliament complex in Sri Jayawardenapura, which also involved altercations with the police. The author need not tell the reader why stationing police and other armed personnel at protests and areas in which public dissent occurs is pointless, foolish and defeats the purpose of freely gathering together and expressing one’s views as part of a collective.

The police and military as institutions of force and violence should, in practice, have nothing to do with public gatherings.

Yet as a photographer who captures protests in broad daylight, specifically against the KNDU Bill, the author has seen both military and police at several locations where Criminally underpaid, underequipped teachers fighting to preserve free education are labeled terrorists for raising their voices in public. University students, on whose backs the system of protest and dissent is built, are arrested and detained for safeguarding the systems that allow them to dream of a better and brighter future. While on the other hand, there is a perahera in Kandy with 5,000 artistes and dancers to keep needlessly forcing a Sinhala Buddhist dogma. The author does not need to tell you where the state’s priorities lie; they clearly do not lie in favor of empowering state education for the better. 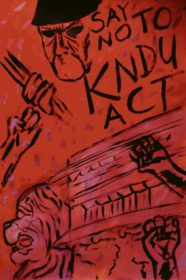 The KNDU Bill (our microcosm in this agonizing series of insults) itself is a cunning strategy meant to weed out whoever leads and participates in dissent and to end protest before it even begins. It has been looming on the horizon since 2018 and is nothing new. For those who are as yet uninitiated, the details of the bill are as follows.

The bill seeks to create a board similar to the University Grants Commission that will be under the authority of a military training academy and will strive to create “military discipline” within the student body on campus, a premise that spits in the face of free education. Free education is not merely not to pay for one’s education from the school level upwards but is also a means of exploring an expanded, multidisciplinary curriculum including extracurricular activities that have something for all students. Free education is a system that must not be made restrictive like the KNDU bill aims to do. It will also discriminate between students that can and cannot pay, thus leaving working class youth in the dust.

Even worse, the governing body will be maintaining discipline on campus and in the classroom, completely cutting out argumentative discussion between lecturers and students. Education in politics and critical thought equal a population that will be much harder for the state to terrorize and intimidate. Military discipline is a complete sham to enforce brainwashing. The author would not have survived under extreme discipline such as this, being a product of free higher education herself and an enthusiast of her own little dissent. The lust for discipline permeates much of the Sri Lankan education system already; schools are modeled on an undying Victorian missionary school setup that penalizes freedom and creates rigid hierarchies within its diverse student communities. A center for learning should be no place for this rigidity.

A voice for protests debarred

Sri Lankan needs an open, unfettered path to education as much as it needs its protest, and this system of going against a failing government and its cronies peacefully begins with addressing the university system and its agonized youth. A country’s masses rising up is the only true means of voicing concerns and anger at their rulers. Meanwhile, the military is armed with a goal of stamping out dissent to maintain a conservative, deeply racist and malevolent state that has for years only served to push forward the violent and cruelly exclusionary framework of nationhood through its opposition to the long defeated yet still colonized north and east of the country, the illusion of sovereignty and deep state paranoia. This year has nevertheless seen increasing protests and dissent rising from the masses across the country.

The state’s fear of its people is nothing new.

In an effort to validate other attacks against public dissent, the so-called king of the tattered nation has been monkeying around with the Judiciary itself, forcing magistrates within the Western Province to a seminar and others from outside it to a webinar with the goal of cracking down on Covid-19 by targeting public dissent and peaceful demonstrations.

The goal? A longstanding one that has been months in the making that connects to the state’s cruelty in creating a public that internalizes the fear they feed on. This is the ultimate goal of the KNDU bill; nationally creating the populace that the failed government and its ruling family can run. And what better way to dissuade dissent than by  weaponizing a disease that has been ravaging the country.

Covid-19 now spreads via protests and open, public opposition towards the government. Covid-19 does not however spread during Buddhist celebrations aimed at showcasing the insecure state’s hegemonic control.

This terror-based narrative around the pandemic as well as the restrictive framework towards education, both to silence protest, is nothing new for the public and we are fed up. If nobody in this failed government can be held accountable to its people that it needs to serve, what do we have left?