The President has proposed to make changes to the constitution via an urgent bill.Â  The changes known as the 18th Amendment to the Constitution, seek to remove the two term limit on being elected to the office of the President and the Constitutional Council under the 17th Amendment.Â  As required under the Constitution, the President has referred the urgent bill to the Supreme Court.Â  Supreme Court heard the Government’s arguments and the arguments of six intervening petitioners on Tuesday 1 September 2010.Â  These changes have not been discussed in the public domain and they are sought to be made in secret.Â  It is important to note that even at the Supreme Court hearing the intervening petitioners were only given copies of the proposed changes after the government started making its submissions.Â  This article explains how the Constitution can be amended, what the key changes are and the legal arguments advanced in favor of and against the changes.

Procedure for changing the Constitution

The Constitution can be amended by passing a bill with a two-third majority of Parliament.Â  However any constitutional changes that affects certain entrenched Articles of the Constitution needs a two third majority and approval at a referendum.Â  For example a change that affects Article 13 (which devolves power to provincial councils) or Article 3 (which establishes the sovereignty of the people) would require a referendum.Â  A referendum is only successful if the total number of ‘Yes’ votes amount to an absolute majority of the total valid votes cast at the referendum.

If Parliament seeks to amend the Constitution via an urgent bill, the President is required to seek the opinion of the Supreme Court.Â  In its opinion, the Supreme Court is required to state a) whether the bill actually changes the Constitution and b) whether a referendum or whether a simple a two third majority is sufficient to make the proposed changes.

Key Proposed Changes to the Constitution

Proceedings before the Court

The reference by the President was heard by a special Supreme Court bench comprising of Justices Bandaranayake, Sripavan, Ratnayake, Imam and Suresh Chandra.Â  The Attorney General advanced arguments on behalf of the Government, and explained the proposed changes to the Court.Â  A summary of his arguments is as follows:

Oppression of Private Media The proposed amendments allows the Election Commission to impose guidelines on Private Media during elections.Â  The private media ought to be able to function freely, enabling voters to freely decide at an election.Â  This would undermine the general public’s right to information.Â  The right to information is the staple of their right to through and conscience (protected by Article 10 of the Constitution).

18th Amendment to the Constitution

The table below in summary form compares the existing provisions of the Constitution and the proposed amendments. 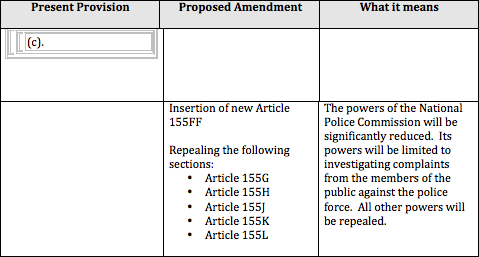 Editors’ note: Download a PDF of the above table here. An interview with Rohan Edrisinha, a lecturer at the Law Faculty of the University of Colombo and Director of the Centre for Policy Alternatives, on the outrageous process and substance of the Eighteenth Amendment to the Constitution can be viewed here.