The 18th Amendment, we were told, would make the President more accountable to Parliament. The Editorial of the Sunday Observer noted back in the day,

By making it mandatory for the President to attend Parliament at least once in three months to answer questions by MPs, the 18th Amendment has not only made a vital link between the Executive and the Legislature, but has also made the President answerable to Parliament. Had President Rajapaksa given thought to dictatorship even in his wildest dreams, he would never have decided to attend Parliament once in three months. Despite being elected twice to the high office, President Rajapaksa strongly believes in parliamentary democracy and is keen to attend Parliament and follow proceedings whenever time permits. Isn’t this characteristic of a truly people’s leader who firmly believes in the power of the ballot?

Emphasis ours. But has the President in fact entertained any questions from MPs in Parliament since the 18th Amendment was passed in late 2010? And precisely when has he attended Parliament, and for what purpose? 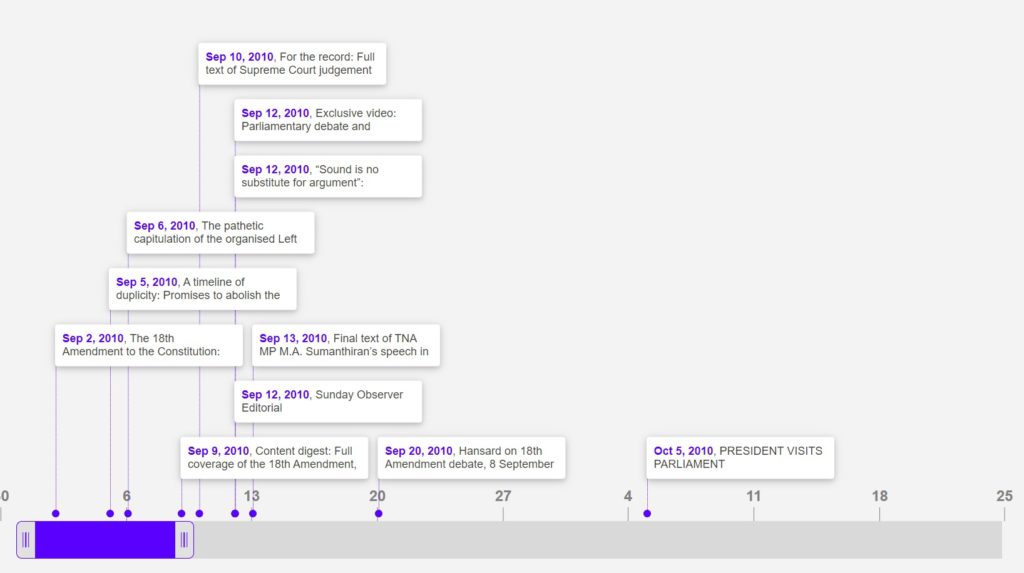 Click here to view a larger version of this timeline, where you can also see it a list of events.

As far as we can find, before this week, the President last addressed Parliament in March 2011. There is no record that he entertained any questions. The timeline above reflects both the genesis of the heinous 18th Amendment and also the occasions mainstream press reported that the President attended / “visited” Parliament.

It was no easy task to compile this. Only a handful ordinary citizens would have the expertise to search for this information online, or elsewhere. There is no easy record retrieval of the President’s attendance in Parliament on its official website. But what is immediately obvious when the scattered media reports are taken as a whole is that the 18th Amendment has in no way at all contributed to a more accountable Executive. The incumbent for example possibly waltzes into Parliament ceremoniously to riotous greetings by those in government ranks, warms a special seat reserved for him as of November last year, possibly smiles benignly at government MPs, twitches a tad when the Leader of the Opposition speaks, twirls his moustache once or twice, adjusts his satakaya, winks and nods knowingly at his blood brothers and summarily leaves, to a standing ovation.

If this sounds like absurd caricature, the following report in the Daily News of the President’s last visit to Parliament is worth reading,

Even The Island coverage of this visit doesn’t include a single question the President had to face from MPs. Very much ‘visits’ to Parliament then, as the titles of the news articles suggest. What then of the MPs who staunchly supported the 18th Amendment saying that it would strengthen the accountability of the Executive? In a lofty speech for an essentially expedient end, the Rauff Hakeem, MP from the Sri Lanka Muslim Congress (SLMC) noted,

“And, in helping President Mahinda Rajapaksa to secure an additional term of office, we hope that the enticement of a third term will compel him to seek the mantle of a sincere statesman rather than being remembered merely as a clever politician.”

Has Mr. Hakeem asked the President a single question even during his cameo appearances in Parliament? If not, why not? Where and how is the enhanced accountability of the Executive demonstrated in practice from September 2010 to June this year? Who in Parliament and amongst us can remember Basil Rajapaksa’s statement noting that attendance of the President in Parliament would be further strengthened by the 18th Amendment? And what of the government’s most loquacious apologist, Rajiva Wijesinha’s assertion during the 18th Amendment debates,

“I would have wished too Mr Speaker that this first step in ensuring greater accountability in the President, by making appearances in Parliament mandatory, had also specified that he would be required to answer questions relative to his executive functions. I believe this is intended, given that His Excellency the current President enjoys Parliamentary debate, but we may have in some distant future a less sociable President without communicative skills who might not fulfil this provision in the spirit in which it is intended.”

Emphasis ours. But it’s not just Messrs. Hakeem and Wijesinha. What about other MPs, the heaps of political commentators, senior Sri Lankan diplomats and the range of voices on this site itself who championed the 18th Amendment? Where are their voices of concern over what is quite demonstrably a farce?

Much of this was known well in advance. As Kalana Senaratne notes in the Sunday Leader back in September 2010, just days after the Amendment was passed,

“Firstly, the provision in the 18th Amendment which states that the President shall “attend Parliament once in every three months” does not essentially suggest that the President will be more accountable to Parliament or the people. One still does not know what the President ought to do after attending Parliament. It is said that he has the right to “address and send messages to Parliament.” But then, will he exercise that right? What if he decides to simply attend Parliament, and watch parliamentary proceedings where his message will be read out by the Prime Minister? If real accountability was to be ensured, he should actively engage in parliamentary proceedings and be involved in some form of active debate and discussion. The 18th Amendment does not do this.”

Kalana’s singular prescience aside, the larger question remains as to why the clarion voices who ostensibly supported the 18th amendment entirely out of principle and a love for democracy are, in the face of what is actually an on-going farce, completely silent.

Therein lies a story that needs to be told.