[Authors note: This wasÂ a talk given at the International Conference entitled ‘Taking the Sri Lankan Peace Process Forward’ organised by the Observer Research Foundation in New Delhi on May 11, 2010.]

Even the externally imposed provincial council system under the Thirteenth Amendment to the Constitution has not lived up to the expectation of the minority communities because of the lack of devolution of land, law & order, and fiscal powers. Though land and law & order power devolution continues to be contested, the matter of fiscal devolution has not attracted the attention of the protagonists or the opponents of the Thirteenth Amendment thus far. So, this window of opportunity should be made use of to promote fiscal devolution as a stepping stone towards a durable political solution to the grievances of the minorities, particularly the Tamils of East and North.

Therefore, this paper would analyse the current fiscal architecture in Sri Lanka and propose a devolved fiscal set-up that could possibly be a stepping stone towards a durable political and economic solution to the enduring ethnic conflict in Sri Lanka.

In these precarious circumstances of the public finance, it is imperative to rationalise government expenditure and increase government revenue at the national, provincial, and local levels. The current government revenue as a proportion of the GDP in Sri Lanka (15%) is one of the lowest among the lower middle income countries. It has to be increased to at least 20%. Revenue mobilisation by the provincial and local governments is miniscule compared to the revenue mobilisation of the national government (see the following section); therein lies the potential to increase public revenue through fiscal devolution.

Two-thirds of the government revenue accrues from consumption (aka indirect) taxes and just 20% accrues from income (aka direct) taxes (see Table 1). Theoretically, consumption taxes are regressive and income taxes are progressive, because the rates of consumption taxes are equal to all who purchase goods and services irrespective of their income levels whereas the rates of income tax rise as the income of individuals or businesses rise (i.e. the amount of income tax is proportionate to the amount of income; higher the income, higher the income tax one pays â€“ the principle of ‘ability to pay’).

Therefore, it is high time the government thinks out of the box to fix its fiscal deficit by transforming the nature, content and extent of the fiscal architecture of the national government vis-Ã -vis the provincial and local governments. The Presidential Tax Commission in deliberations during 2009-2010 could, hopefully, come up with some innovative ideas to narrow the gap between government revenue and expenditure and thereby practice fiscal prudence (in place of fiscal profligacy of the post-1977 period). If need be, amendments to the present Constitution should be made, for which the necessary parliamentary majority is within the grasp of the present government.

There is an argument that the second tier of government (i.e. provincial council system) is a costly exercise with overlapping of functions and very little benefits to the provinces (Hewavitharana, 1997)[1]. It is true that in 2009 the Ministry of Local Government and Provincial Councils (LKR.102 billion or USD.0.90 billion) was the fourth largest spending ministry after the Ministry of Finance (largely public debt repayment) (LKR.831 billion or USD.7.23 billion), Defence (including Public Security and Law & Order) (LKR.212 billion or USD.1.85 billion), and Public Administration and Home Affairs (LKR.106 billion or USD.0.93 billion).

Rationale for Fiscal Devolution
Fiscal decentralisation has gained momentum in capitalist and communist/socialist countries (such as China and Myanmar, for instance) and in unitary and federal states alike since the last quarter of the twentieth century. Country experiences have shown that fiscal decentralisation do enhance public goods and services delivery and poverty reduction (Ehtisham and Brosio, 2009). However, designing of fiscal decentralisation should be country-specific (Fedelino and Ter-Minassian, 2009). This author’s case for fiscal devolution is not based on the dichotomy of unitary versus federal constitutional cum political models, but stems from the evolving business model globally towards subcontracting and outsourcing the production line and the supply chain (Sarvananthan, 2009: 7). However, not everyone agrees that administrative, political and fiscal decentralisation is the panacea for economic efficiency (see, for e.g. Hewavitharana, 1997).

Public administration is most effective when it is closer to the people, which apply to tax administration as well. Closer the revenue authorities to the people higher the revenue collection. Therefore, the present Inland Revenue Department and Excise Department should be decentralised. Thus, provincial and local inland revenue and excise departments should be set up in order to collect direct and indirect taxes effectively at the lowest possible public administration unit. Information on local businesses and professions could be gathered more effectively by the local offices of the inland revenue and excise departments rather than by the centralised departments located in Colombo.

The devolved government revenue raising departments should have appropriate incentives and penalties for performance or lack thereof. That is, the national government should set annual target of revenue at each level of devolved units of revenue mobilisation. Incentive payments should be paid to those units that overshoot the target. Conversely, penalties should be imposed to those units that fall short of the target. By this way, the national government could incentivise the revenue collection at the provincial and local levels with rewards and penalties.

Financing the Post-War Reconstruction
Government’s avowed strategy for the economic revival of the conflict region is focused on physical (dwellings, roads, bridges, etc), economic (electricity, water, telecommunications, railways, etc), and social (schools, hospitals, etc) infrastructure development, which are indispensable. However, this author has serious reservations about the proposed financing of such infrastructure projects. Given the very tight fiscal space of the government as noted above, I do not think the government has adequate resources to finance such infrastructure development, because they are costly. Moreover, in the context of global financial crisis coupled with precarious external political relations of the present government, it is unlikely that the government will be able to mobilise adequate concessionary finance from external donors (both bilateral and multilateral). Infrastructure development is not a one-off capital expenditure. It has a recurrent expenditure in terms of the maintenance cost of such infrastructure for a long period of time.

In this scenario, the best option left for the government is to attract private capital (both domestic and overseas) for investment in infrastructure in the former conflict affected region and beyond under BOO (Build, Operate, and Own) or BOT (Build, Operate, and Transfer) modalities. The government’s attempt to re-build the rail line beyond Vavuniya up to Kankesanthurai (in the Jaffna peninsula) is laudable, because the northern rail line (legendary ‘Yarl Devi’) used to be the highest revenue earner for the erstwhile Ceylon Government Railways (CGR) prior to its termination in the mid-1980s as a result of the civil war. Besides, rail transport is cheaper than road, ocean or air transport due to lower fuel cost per passenger, and the absence of traffic congestion and security checkpoints.

However, I do not think the government has sufficient financial resources to spend on this ambitious but worthwhile project. The government is explicitly appealing to the people for contributions, and Sri Lanka’s diplomatic missions abroad are organising ‘benefit show’ to mobilise finance from the diaspora, which are highly unlikely to yield desired results. According to the Central Bank Annual Report (2008: 69), the Department of Railways incurred operating loss of Rs.12.5 million every single day during 2008 (annual loss was LKR 4,553 billion or approximately USD 43 million). Our suggestion is that, whilst the government could invest its own money as well as borrow from foreign donor/s to re-build the rail tracks and stations (infrastructure), it should open up the passenger transport to private capital (both domestic and foreign). That is, locomotives and rail cars/carriages could be invested, managed, and operated by the private sector. This kind of public-private partnership could be the best way to beat the fiscal crunch faced by the government. Although the national government could re-build the rail tracks and stations initially, the maintenance of the same should be handed-over to the respective provincial governments.

Similar public-private partnerships for infrastructure development in the former conflict affected areas could be explored amidst shrinking fiscal space at the national level.

Tax Reform Propositions
Presently, income tax collection is based on self-assessment made by the payee (either individual or corporate entity), which is not satisfactory. Instead income tax should be collected at source (PAYE â€“ pay as you earn) as much as practically possible in order to improve compliance.

Tax reforms in Sri Lanka should be based on streamlining and reducing the number of direct and indirect taxes payable by individuals and corporations and rates of such taxes, and increasing the number of individual and corporate tax payers. That is, widening the tax base is the need of the hour, rather than deepening the number of taxes and their rates. Imposition of income tax on public sector employees and professionals is sine qua non for the widening of the tax base. Public sector employees in Sri Lanka are in an envious position, vis-Ã -vis most other countries, because their income is not subjected to PAYE tax. In India, for instance, the income of public sector employees (including armed forces personnel) is subjected to PAYE tax. Similarly, professionals such as doctors (who work privately as well in addition to their government job), lawyers, accountants, and teachers should be brought under the PAYE tax scheme.

The foregoing propositions could be best achieved under a devolved taxation system where tax avoidance and evasion could be minimised by being closer to the people. Bribery and corruption involved in tax evasion could also be minimised when the unit of surveillance is smaller and local.

The foregoing propositions would require amendments to the present Constitution that could be incorporated in the upcoming overhaul of the Constitution by the present government. Alternatively, if there is no political or bureaucratic will to transfer fiscal powers to the provinces and local authorities, economic rationalism would suggest to abolish the second (provincial councils) and third (municipal, urban, and village councils) tiers of government despite the fact that the savings in public expenditure would be only small.

Conclusion
Although the Thirteenth Amendment to the current Constitution has vested some powers of revenue mobilisation to the provinces, it falls short of an effective and efficient mechanism to make the provinces financially viable and minimise their dependence on the national government. The tendency in the past twenty two years of the operation of the provincial councils (1988-2010) has been the monopolisation of taxation by the national government.

The political establishment of Sri Lanka and the psyche of the masses at present appear to be incapable of undertaking radical changes to the political and administrative architecture. Therefore, incremental devolution appears to be the pragmatic way forward for durable conflict resolution in Sri Lanka. Fiscal devolution, one such step in the incremental devolution process, could presumably attract stronger government and public support (than the devolution of political and administrative powers) under the present Unitarian government. 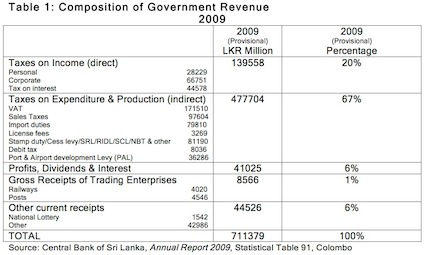 [1] Retired Prof. Hewavitharana is currently an economic adviser to the President and Chairperson of the Institute of Policy Studies (IPS) of Sri Lanka.