This month Institute of Economics and Peace released the 2019 Global Terrorism Index (GTI). The report measures the direct and indirect impact of terrorism in terms of lives lost, injuries, property damage, and physiological aftereffects of terrorism in the year 2018 in 163 countries. The GTI defines terrorism as “the threatened or actual use of illegal force and violence by a non-state actor to attain a political, economic, religious, or social goal through fear, coercion, or intimidation”. The GTI score is calculated using four proxies: the total number of terrorist incidents, the total number of fatalities, the total number of injuries, and the measure of total property damage.

Globally, the number of deaths from terrorism fell by 15.2% from 2017 to 2018, with the total number of deaths going down to 15,952, almost half of which occurred in Afghanistan. Despite the reduction in death, the overall impact of terrorism remains high and the global economic impact from terrorism was estimated at USD33 billion. The top five spots on the index were given to Afghanistan, Iraq, Nigeria, Syria, and Pakistan, while 26 countries were not affected by terrorism at all.

The most important question to us would be as to where Sri Lanka stands on the index. Regionally, Sri Lanka ranks in 6th place, with Afghanistan being at the top and Bhutan being the most peaceful (the Maldives is not included). Sri Lanka’s regional rank has remained unchanged since 2013. On the Index as a whole, Sri Lanka is placed 55th after gaining an index score of 3.57 (with 10 being the worst possible score). The island has steadily improved since the end of the Civil War in 2009, when it was the 8th most terrorism-affected country (with a score of 6.81). Compared to the previous year, Sri Lanka was able to move from the 49th place by improving its score by 0.48 points. This improvement was largely due to a reduction in the number of attacks attributed to anti-Muslim extremists. Another reason for the general improvement is that in order to calculate the aggregate score, the GTI uses a five-year weighted-average where the scores of the preceding four years also impact the GTI score for the current year. Thus according to the GTI, the 2009 conflict does not have an impact on the overall score since 2014. While the reason for this weighted score is to accommodate the psychological trauma that lingers on from previous attacks, it is difficult to say if, in reality, the effects of the Civil War no longer linger in Sri Lankan society. 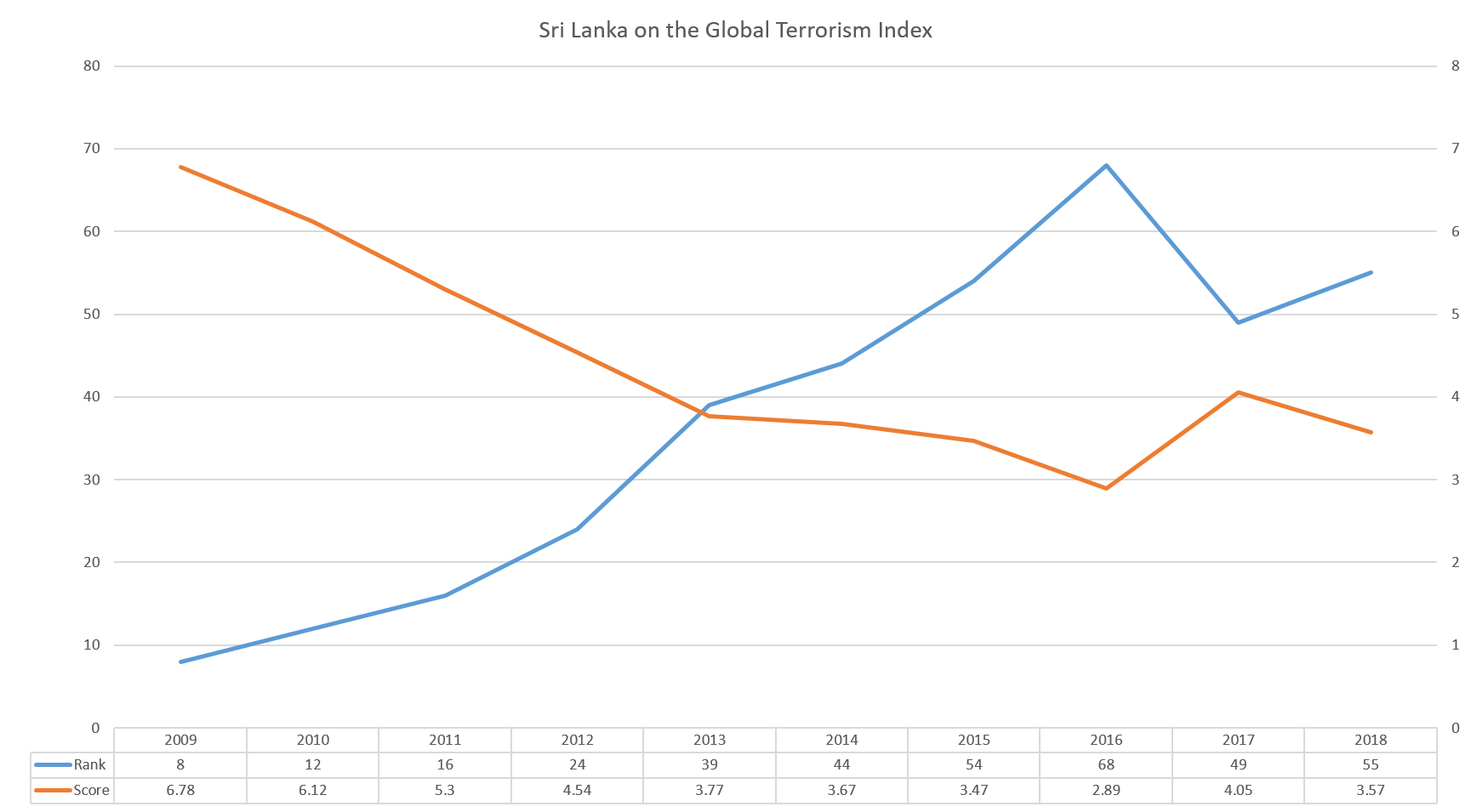 While Sri Lankans should be pleased to know that Sri Lanka shows overall improvement, it is important to not become complacent. Following 2009, Sri Lanka has been plagued by Buddhist extremism, where groups have propagated and incited violence against minorities in the island. Thus, incidents such as the anti-Muslim pogroms should also be considered as terrorist incidents since they were intentional acts of violence conducted by a non-state actor. Thus, while Sri Lankans may instantly think of the LTTE when discussing terrorism, it is important to realize that terrorism can come in many shapes and forms. Furthermore, despite these improvements up until 2018, we should keep in mind that next year’s ranking is likely to become worse as a result of the Easter Sunday attacks of April 2019.

Violent extremism is likely to linger on, and steps should be taken to monitor and tackle radicalization and prevent violent extremism. Steps can include developing a National Counter Radicalization Policy, promoting inter-religious and inter-cultural dialogue, working with tech companies to monitor online extremism, and engaging in education and language reform. At the end of the day tackling violent extremism needs a multipronged approach that requires all stakeholders to be involved in the process.

2022: What a Momentous Year for Sri Lanka

In Retrospect: The Protests That Were