It never ceases to amaze me that our cultural critics – and I refer exclusively to those writing in English – do not address our art. You meet them at exhibitions, where they may make an observation or two. Sometimes the work of our better known painters decorates their book covers. But open the pages and you’ll find no discussion inside. I once asked our leading cultural critic – she writes astutely, admirably on fiction, drama, film, television, advertising – about the lacuna. Art, she said, was “difficult.”

I cannot in all honesty think of a more demanding medium than film: it works with language, music, sound, the specific frame of the camera which enables close-ups, panoramic sweeps, resulting in moving images often edited in ways that produce further complexity. Compared to this, painting requires far less knowledge. One must learn another semiotic (sign) system (art is not a language); but that’s well within the capacity of the trained cultural critic. By placing, as it were, a “No Entry” sign before art, these critics, who could have productive, provocative things to say about it, have left the field to aesthetes – archaeologists, architects, art dealers, whose coolness of attitude, not to mention attire, lies in inverse proportion to intellect.

Since the 1990s, our art has intervened into our present with innovation, intelligence, courage and commitment – lacking, for instance, in our English fiction. (Apart from The Jam Fruit Tree, there isn’t a single Gratiaen Prize winner I’d recommend to a friend; well, perhaps Chinaman with its last 100 pages excised. And yet people publicize making the short list.) Nevertheless, this fiction receives extensive critical attention. Our art deserves at least as much.

If writing within a more conservative, conventional vocabulary, I’d call Jagath Weerasinghe our greatest living artist; though Muhannad Cader could also stake a claim to the title. (Insistence, incitement mark Weerasinghe’s artistic production, which has consistently critiqued the major over a long career. Understatement, attention to the fragment, fractured, mark Cader’s. His work, a meditation on the minor, should challenge, delightfully, any cultural critic.) But poststructuralism critiques hierarchical categorization, canonization. Besides, greatness to one frame of reference – Dutugemunu, say, or Prabakharan – often signifies its antonym to another. There are, after all, people who hold Senaka Senanayake a good artist. (His work appears at best advantage when decorating the huge walls of tourist hotels, places that, like his painting, produce Sri Lanka as exotic, colorful, tropical. In a word, without problems.) How, then, does one evaluate art? Actually, one doesn’t. At stake here is not quality, whether the object is good or bad.

Rather, to begin with, whether a painting “bruises” you, a happening not quite within one’s control. Roland Barthes deploys the term in relation to photography. The concept also comes in handy when thinking of how art affects us. Something in the object pricks, pierces, punctures the subject (viewer, in that conventional vocabulary). In so doing, the painting makes the viewer its object, overturns the hierarchy, instructs this subject/object: read me. Don’t just look at me, admire and walk away. I am the result of intellection, not just talent. I’m trying to say something to perturb you. Think about it. Peruse me, carefully, again and again. Think some more.

Of course a problem arises here. Unlike a book or film, which could be accessed from the comfort of one’s home or the library, painting requires access to the artist, or whoever controls the image. A problem compounded in Sri Lanka by our lack of public galleries, museums. There’s no place to view a sample of post-1990s art, not even a book. On the other hand, the historian encounters analogous difficulties with the archive – which do not prevent that discipline from going about its business.

I got bruised the other day at Weerasinghe’s studio. He was showing the paintings that constitute his latest exhibition, Decorated. One in particular struck me. Though directed to other canvases by Weerasinghe, some of them also compelling, I kept coming back to it. Take in the image: it depicts a sinister man in camouflage, a soldier, against an orange “background.” Upon returning home, I couldn’t get my mind off it.

It reminds me of another Weerasinghe painting, part of a triptych, Who are you soldier?, of 2007. It, too, depicts a soldier against a similar, a gold, or should one say saffron, background. One painting is connected to, networked with another. This soldier, like the other, wears camouflage, a trope brilliantly introduced to our art by Chandragupta Thenuwara. One painter, now, is networked with another. And, as the discipline of art history might remind us, the canonical take on camouflage is Andy Warhol’s, who queers it. (The closeted U.S. gay could be understood as camouflaged. Though Warhol, typically, inimically, camps it up: his prints, easily Googled, reproduce the design in vivid, flamboyant, unexpected color.) Thenuwara, in duller, earth tones, uncovers, exposes what the uniform hides, its metonymic relation to death, killing, murder – and its camouflage, passing as symbolizing liberation. What we call Sri Lankan art bears the trace of other places, other problems; isn’t quite “ours.”

Put differently, there’s no such thing as an original; at least, not to post-structuralism. Think about it: original means something totally new, unique. But you can only construct something, anything, out of other things. (Unless you are god, who alone could produce something out of nothing, making originality a theological concept.) 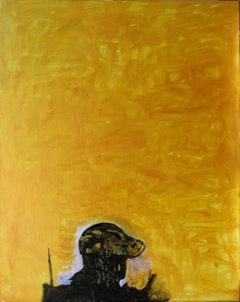 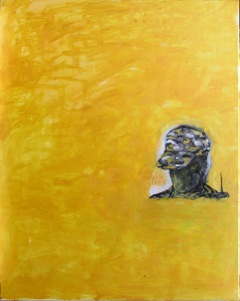 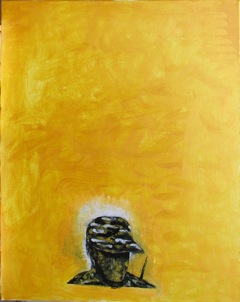 Who are you soldier?’s pictorial space is dominated by what conventional art history would term its background, saffron. But the shade does not take backstage, serve a secondary function. It signifies: suffusing the canvas, it suggests that the soldier, or military, be read in relation to Sinhala Buddhist nationalism, the color of the robe. Emphasizes the violent record of such nationalism.

In contrast, the soldier dominates the pictorial space of the more recent painting, again surrounded by a shade of saffron. (Though saffron could very well be a shade of orange or gold. These distinctions, categorizations matter only to those in the business of manufacturing and marketing paint.) When read against the other image, this proffers that Sinhala Buddhist nationalism, mobilized by the Rajapaksa’s in their war against the Tamils, doesn’t compel the regime any more. Rather, at the risk of stating the obvious, the militarization, one could say Pakistanization, of the Sri Lankan social, in which troops now run everything from farms and tourist resorts to cricket stadiums. They even manage Montessori’s and discipline first year undergraduates; their induction into schools cannot be far away.

The painting’s soldier assumes an ambiguous pose: is he sitting down or about to stand up? We cannot tell. But the reader already has a few clues, though signifiers is the better term, to guide an interpretation. This soldier is not depicted in a celebratory stance – raising the flag, for instance – which would affirm Sinhala Buddhist nationalism. Weerasinghe sheaths the man’s face, including the eyes, ominously, in black. A second skin, hide. The soldier cannot reveal his identity, conceals something. Something venal. The painting produces the military – the Sinhala Buddhist military – as a masculine menace. Not the glorious, golden, decorated heroes in the Rajapaksas’ portrait. By depicting it, Weerasinghe exposes their camouflage, what they hide behind.

The Rajapaksa’s would have it that the military, barracked, no longer at war, now helps develop the country. Weerasinghe insists otherwise. It may not bear arms any more; for its contemporary mobilization boxing gloves do just fine. The true menace of the image lies in those gloves. We do not desire to kill you these days, they inform the citizenry – though we won’t hesitate, if necessary, as in Weliweriya – but we will most certainly hurt you, beat you up, if you don’t get the message, dissent. Thus we sit without resting, in a posture that allows us to get to our feet instantly. Vigilant, not relaxed, we do not take our boots off.

The Rajapaksa’s, together with the Rajpal’s and Rajiva’s, insist upon the professionalism of the Sri Lankan armed forces. Weerasinghe’s text demands of us: look beneath the sheath, ask what it shrouds. One could write pages. But two symptomatic instances will illustrate the point. In the North, rape, including of Tamil children. (Two soldiers have been convicted of raping youngsters in the north since 2009. Tamil women, subject to harassment both by the courts and their community, are far more reluctant to press, publicize such charges against the military. Though the government admits to prosecuting eleven such cases in 2012 alone.) In the East, the terrorization of subaltern women like Khadija Umma (whose predicament could be read here).

When they fled their homes during the ‘Grease Yaka’ incidents, which have yet to be satisfactorily investigated, explained, the military occupied the land of sixty-nine families in Ashraf Nagar and cordoned it off as a high security zone. After the war ended. With no threat in sight. Unlike the rest of the villagers, Khadija Umma’s and another family refused to give up their property without adequate compensation – in the face of incessant harassment; including, most recently, some of these professional troops unzipping their flies and displaying their genitals to the old women.

Art cannot tell a story; you need words for that. It can, however, direct you to them. An intellectual act, insightful painting makes you think, pose questions, probe problems. You don’t have to ask the artist what a painting means. You can attend to its signifiers and figure it out yourself.

A painting cannot bruise you if the problem it addresses – in this case, the menace of militarization – doesn’t concern you already, consciously or otherwise. For you are not outside it, but linked to the Sri Lankan text. In piercing you, it reminds you of that, requests a response.

In my reading, Jagath Weerasinghe’s given the Rajapaksa’s a hiding. What’s yours?