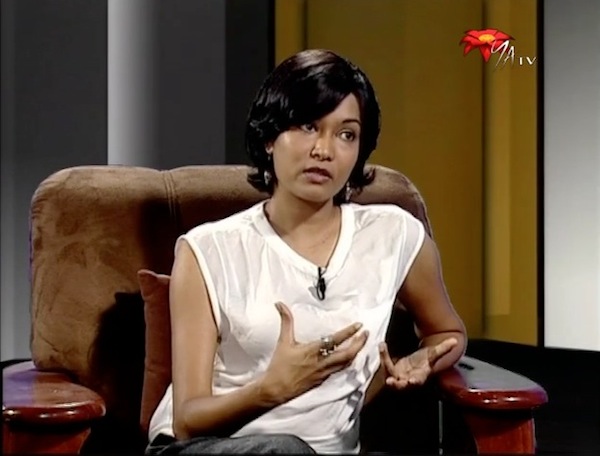 Her Stories, a unique archive of oral history, was conceived of and curated by Radhika Hettiarachchi. We begin by Radhika going in to what the archive is, and how it came about. Featuring 240 stories of mothers, the archive’s website avers,

These histories or ‘Herstories’ showcase a shared history and highlight how we Sri Lankans are rooted in multiple identities, multiple histories, and different experiences. Through the narratives of many, this project also highlights a sense of fundamental humanness that transcend boundaries. These ‘Herstories’ will not only add to the culture of oral tradition and story telling in Sri Lanka, they will contribute to bringing diverse groups together through the lives of others.

Radhika notes that the age of the subjects in the archive ranged from those in their early 20’s to those around 65. In the interview Radhika reasserts the importance of looking at women’s voices which are often lost or marginal to history as recorded by men. She also says she focussed on mothers because they give a composite view of society and their communities. When asked as to why it is important to record these stories in the manner that Radhika has, she answers that it is vital to create a more textured history to that which decades hence Sri Lankans may read, see and hear about the time we now live in. The voices of people – in this case, as a start, the voices of women – help create this texture, she noted, through subjective, personal accounts that capture aspects of life, society, politics, gender and work that would not otherwise have been recorded.

After going into how the women were chosen for the initiative, Radhika goes on to explain how the women were guided in the process of writing down, in various forms, the story of their lives, and what was important to them in the past, the present and into the future. Radhika notes that the stories which were the most ‘striking’ – in terms of their story telling prowess or skill in narration – made it to the archive.

Radhika then explores the question as to whether projects of this nature that generate and capture stories (of women in this instance) around the trauma of war, and the resulting loss of lives and livelihoods, actually exacerbates conflict rather than helps in healing. Radhika notes that this was never a concern in ‘Her Stories’, where the women really wanted to have their story recorded and were grateful for the opportunity to do so.

Radhika then goes into why she decided to digitise the entire archive and put it up on the web, and notes that ideally, she would have also liked to produce a printed anthology of all the stories. She also notes that the original content was given over to the National Archives, which hitherto had no section for or content on women’s archives.

When asked as to whether there were any leitmotifs and commonalities in the stories of the women featured in the archive, Radhika notes that repeatedly, the women made reference to how happy they were the war was over, wanted a better future for their children, and basic socio-economic rights.

Radhika then answers a question on whether this kind of archive actually helps build empathy or just serves, inadvertently, a more voyeuristic purpose. Radhika notes that while it is impossible to engineer the construction of empathy to an archive such as this, the purpose of it is to actually raise awareness among people who may not have otherwise known about the hardships these mothers have gone through to recognise there is more to history than what they usually consume and acknowledge.

‘Her Stories’ and Radhika herself came under fire over Twitter after the archive’s first public showing in Colombo recently. Radhika answers the most pertinent criticisms directed against the archive and her towards the end of the interview, and in particular addresses the concern that the archive in no way helps reconciliation in post-war Sri Lanka.

Noting that the exhibition will travel to Galle, Kandy, Jaffna and Anuradhapura, Radhika notes that all the 240 stories will be incrementally added to the website as well.