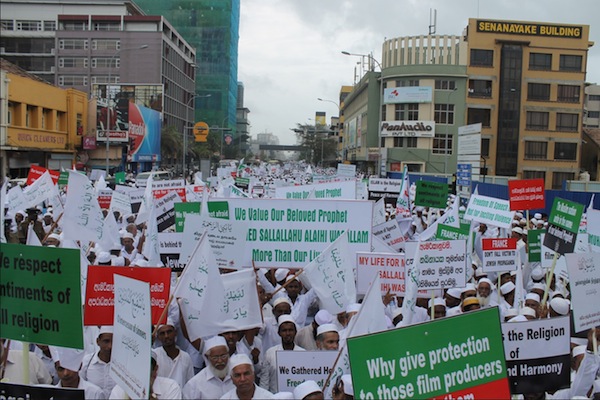 March in Colombo on 24 September 2012 against the film. Photo courtesy Vikalpa

Muslims have never shied away from discussing the private and public life of their Prophet Muhammed (PBUH). In fact they have welcomed an examination of his life and times. However when the Muslim world is geared for a debate and public engagement, the West denigrates itself with cartoons and cheap flicks. The latest being Innocence of Muslims which has set the whole world on fire. This attempt to hurt at any cost reveals a certain desperation that can only be a compliment to Prophet Muhammed (PBUH). However in allowing and permitting this worthless, useless and desperate attempt to ridicule and slander exposes the double standards and hypocrisy inherent within the western world and its intellectual realm with regard to one of its most touted and promoted intellectual products ‘free speech’.

The White House Press Secretary described Innocence of Muslims as ‘reprehensible and disgusting’. Yet the Obama Administration remains unmoved. An act of deliberate provocation is given cover and protection as ‘free speech’. What if it was not a movie about Prophet Muhammed (PBUH) but about someone else? Would it still be free speech and free for viewing? What if it was about Anne Frank? What if it was a movie that showed her diary as a big lie, that she was a fraud writing up made up, fictional figments coming out from the vivid imagination of a very bored teenage girl? I seriously doubt that in such a case that the US Government, Google or You Tube would adopt the same ‘liberal’, ‘free speech’ approach.

March in Colombo on 24 September 2012 against the film

Even in the way the West defines free speech, it is not an unfettered, untrammeled absolute right. It is pegged in and restricted. Under the standard narrative, in deciding whether to decree something as free speech or not, there is a need to balance competing considerations but when it comes to Muslims, what we see is not a balance but really a bias. There are examples a plenty.

In 2011, the Turkish film Valley of the Wolves: Palestine was banned in Germany for being ‘anti-Semitic’ and more so for being ‘anti-Israel’. There was nothing about religion. It was an action movie about a Turkish counter attack against the Israel attack on the Gaza flotilla. However these same laws fail to protect the sentiments of Muslims. On the Innocence of Muslims, Germany remains guilty of double standards.

Similarly a recent critique of Israeli atrocities in Palestine by Richard Falk was accompanied by a cartoon which showed a dog wearing a kipa. The cartoon was condemned for being ‘Anti – Semitic’. No champion of free speech came to defend it as being ‘free speech’. No newspapers re-published the cartoon in solidarity. In the end Richard Falk apologized.

In 2007 whilst the European press was aggressively defending the right to free speech in the context of another cartoon controversy relating to the Prophet Muhammed (PBUH) the Spanish satirical magazine El Jueves was banned by the Spanish High Court and the editor punished for a cartoon. The cartoon ridiculed not a Prophet and not even a Pope. It caricatured a Spanish Prince.

Why is it that the laws that protect Israel, Jews and the Spanish Royal Family from offense and insult not protect the Muslim? To borrow from Shakespeare ‘Hath not a Muslim hands, organs, dimensions, senses, affections, passions; fed with the same food, hurt with the same weapons, subject to the same diseases, heal’d by the same means, warm’d and cool’d by the same winter and summer… If you prick us, do we not bleed? If you tickle us, do we not laugh?’

But are the Muslims overreacting? Are they too touchy? I think not. In another time, in Europe, in Germany Julius Streicher’s Der Stürmer published Nazi cartoons that ridiculed and stereotyped Jews. Before they started ‘doing anything’ to the Jews they started ‘saying anything’ to them. Before the killing started, it began with a bit of insult, offence and ridicule. The precise thing that Anne Frank and her diaries warn against.