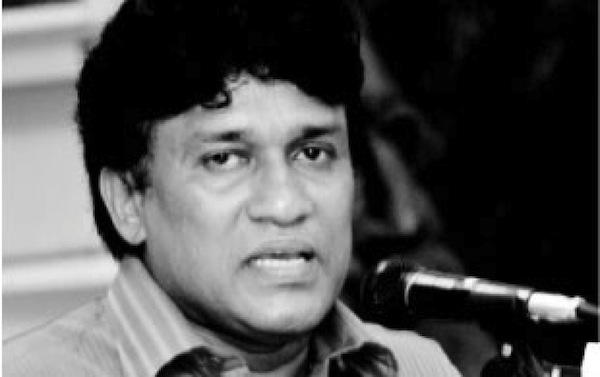 Image from The Nation

A few days ago, I had a mail in my “Inbox” that reminded me of those “three musketeers” for some odd reason. The title of that mail read, “Arumugam Thondaman, Mano Ganesan, Radha Krishnan join hands for Sabaragamuwa PC”. It was a media release and concluded saying, “Under the current electoral system, we (i.e., the three of them) have reasonable opportunity to obtain our representation only if we go together beyond party lines.” Somewhere in between, the statement says, “DPF being a vibrant party in the opposition, will continue to oppose the government. We will continue to work with UNP, NSSP and USP and other opposition parties.”

The statement was from DPF leader Mano Ganesan’s office. Thus it was more an explanation on why Ganesan was getting into a “masala” front than anything else. “We recognize the participations of CWC and UPF in the government. Our joint exercise is only to seek Tamil democratic representation.” The excuse for the joint front is very plain and lame. Its just an attempt for a possible increase in plantation sector Tamil representation. Not in parliament. But in the Sabaragamuwa PC.

Why seek an increase in representation in PCs ? There is no political reason given. No programme offered. Just possible increase in numbers for the three of them ! Thus to visualise the three on election campaigning in Sabaragamuwa – Ganesan speaking – Radhakrishnan waiting for his turn to speak – Arumugam Thondaman presiding the meeting – what would they tell their people in asking for votes ? They would probably agree to tell the plantation sector, they are all of common origin, common stock and therefore they need the bulk of the votes for better representation. “What for ?” could be an issue for those people who vote, but not for the three leaders looking for power.

Ganesan in a different T-shirt may get on the “Platform for Freedom”, with Wickramasinghe, Vickramabahu, Siritunge and others to oppose this “corrupt, brutal and undemocratic” Rajapaksa regime, as he says he would. What would he tell those same people in Sabaragamuwa from this different platform with different faces, about the Rajapaksa regime ? That Arumugam Thondaman though a cabinet minister in this Rajapaksa government, is a great Tamil leader and therefore people should topple the Rajapaksas and not Thondaman ?

Ganesan does have a right to stand for his nationalistic politics. He has a right to stand for their identity, as all others. He should in all means speak for the plantation Tamil community, a deprived segment of our people. That is not disputed. What is disputed is, how Ganesan is going about, doing it. Radha Krishnan’s Upcountry People’s Front is a non entity, even in plantation sector politics. Ganesan’s route to popular power politics will not be through piggy backing Thondaman and his CWC either. It will not be through manipulations and not through short circuits. Today, for the Tamils of Indian origin in the plantation sector, to have their socio political aspirations met, they need to break off from the shackles of the CWC and its leadership. They need a new political programme outside the CWC, that could challenge the unbelievably corrupt, incredibly dictatorial Thondaman.

Present plantation sector polity is not what they were during the early phase of Savumyamoorthy Thondaman’s leadership. There is some socio economic mobility in their society. A greater migration to towns and cities for alternate employment is now felt, from these estates. Growth within estates have also given hope of a better economic life to most. While their still backward ideology, their cultural bondage with the CWC and Thondamans, have not ruptured deep enough to help them look for political alternatives, there certainly is uncertainty on how the CWC would lead them. The tightly knit organisation looking into daily issues of workers, with a tight hold onto their personal life as well that was, has also loosened up. There was one Chandrasekeran who emerged from this rupture, but ruined himself thereafter. There is yet space for another Chandrasekeran, this time, if he or she can adopt to a political life within the larger canvas that Arumugam Thondaman has failed to capitalise on.

When past parliamentary elections are scanned, it shows the CWC had only piggy backed with either the UNP, or the UPFA and not contested on its own even in the Nuwara Eliya (NE) district. NE can possibly return 04 CWC MPs out of the 07, on the strength of its membership, if the CWC can regain its past glory. But now, they can not, for sure. Therefore even within alliances, where Sinhala votes from electorates like Hanguranketha, Walapane and Kotmale also add on, the CWC have not been able to have more than 03 MPs including Arumugam Thondaman. All through the last 23 years, since the 1989 February parliamentary elections, the CWC has not contested on its own at 06 parliamentary elections held to date. They have, going into alliances got only 02 to 03 MPs, a single ministerial portfolio for Arumugam Thondaman and at times a deputy minister’s post with a few other lesser positions as perks.

On common knowledge, all of that State power has allowed for a small coterie of men with kickbacks in a massive corrupt world, to keep Arumugam Thondaman in power. He is alleged to be into massive deals with plantation companies, even on collective bargaining. To be in the government, he even compromises on worker rights. In short, Arumugam Thondaman today is commonly called the “idol of everything immoral”. Ganesan cannot be ignorant on any of that. Is this the politics Ganesan says they could together have good representation from, if they give up on party allegiances ? Is this the politics Ganesan would court, just to have one or two PC members to the SG provincial council ?

Yes it is and it would be another experiment for the two men, who are ever desperate in being powerful. For Arumugam Thondaman, it would be an alliance worth trying under his party symbol, to see if he could muster enough votes to bargain power in future, instead of piggy backing one of the two main Sinhala political power blocs. For Ganesan, it would be an alliance he could have  representation in districts he has to date, failed to encroach. And that’s power, again, though without politics and principles.

This new “Sinna durai” tactics may have some provincial luck. Provincial politics does allow for such alliances still. But it would not be of any use in mainstream national politics, where both Arumugam Thondaman and Ganesan would want to wield some bargaining power.

This State does not have space for “minority politics” any more. It has now been turned into a complete Sinhala State, centralised beyond the Constitution. It can not and would not think or act, other than in Sinhala. All its appendages, its power limbs have been completely politicised, they don’t move without orders from the political regime. The State and the Sinhala regime now function as one. Therefore all ethnic minority and political parties and groups, who coalesce with this State and its political regime, have to play according to the needs of the regime and NOT on what they would want to represent.

In short, clear and in unambiguous terms, this regime has virtually destroyed all minority politics, whether ethnic or ideological. There is no more SLMC, no more CWC, no more “Left” politics on independent platforms that can impact on society. The Muslim identity that late Ashroff wanted to give political meaning to, is now in doldrums. That doesn’t have any meaning politically and the SLMC he created has no existence outside the UPFA. It is the same with all other minority blocs. Devananda and Sangaree too will not have any space in Tamil politics, on their own. They have to be with the Rajapaksa regime to say they represent the Tamil people. So is it with all those “Left” parties. They have to be with the UPFA to say, they are “anti UNP”, which is their only slogan of survival.

Today, there is ONLY ONE minority political alliance, the TNA, that still can negotiate independently. Tamil politics as projected by the TNA does still retain its identity and meaning, as it was not compromised to fall in line with this regime. Not even under Delhi pressure. It still stands independently with a set of demands that comprise a political programme, and it still lives politically, compelling even the Delhi administration to concede to their right to play politics independently. The TNA thus remain the historical presence of the Northern and Vanni Tamil people and outside this regime. Of all minority politics in this country, it is the Northern Tamil politics that still survives to pressure, lobby and bargain.

Fundamentally, the Rajapaksa regime has divided this country into two political entities. Into a Sinhala society that usurps political power to live beyond its own Constitution and the Northern and Vanni Tamil society that would not compromise politically. Ganesan would therefore have to choose between these two major power blocs and not between two provincial heads in forming a scriptless, “masala” front that could be anything, something or nothing, after the PC elections.

A Look Back with Fresh Hope

Solidarity Actions and Struggles for Justice in Sri Lanka