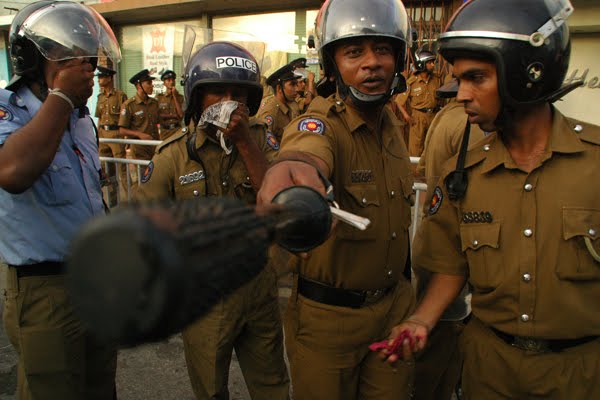 The decision of the Justice Ministry to amend the law relating to the period of detention of people arrested and to extend it to forty-eight hours instead of the existing twenty-four is alarming and unjustified to say the least. The statement of the Bar Association of Sri Lanka issued through its President is more alarming and also saddening because it points to the fact that the justice Ministry has not thought it necessary or fit to consult the said association before embarking on this course of unprecedented action. Secondly the Bar Association as they normally should, have studied the legal position here and in other civilized countries before rushing into readily express their unqualified approval to this kind of legislation. The casual way the President has reacted shows that the Bar Association has failed to consider this matter in depth before expressing its unqualified approval. It follows that the President will not speak on the subject in Parliament except to approve the provisions.

No civilized or free country permits this kind of incarceration in its legal system. Even in our own country the provisions of the Criminal Procedure Code enacted in 1898 which permitted this kind of limiting freedom limited it to twenty four hours. Judges both here and in India (more in India than here) who have on and off the bench advocated active assertion of judicial power to ameliorate the miseries of the masses have tried to minimize even that period by laying down that the detention by police without producing before a Judicial Officer “cannot be extended for one single hour except upon some reasonable ground justified by all the circumstances of the particular case.” Even in instances where the period of permissible detention is twenty four hours it is laid down under section 36 of the Criminal Procedure Code that the a peace officer making an arrest shall ‘without unnecessary delay” send the person arrested before a Magistrate. Hence the period of twenty four hours is also heavily restricted and closely watched. The delay in producing a suspect before a judicial officer even under the twenty four hour law will have to be satisfactorily explained by those responsible for the arrest and delay.

This is because the danger in these provisions is not in the law as such but in their ready abuse. Legal systems, judges, lawyers and other officials work tirelessly in order to prevent possible abuses of well intentioned legal provisions. The positive way to look at denial of freedom is to insist on the remanding authorities to justify such actions. This is not being done in Courts in our country.

All these provisions relate to persons “arrested.” People are all too familiar with situations where those taken in are kept in custody without a formal “arrest.”  Courts have commented on this practice also – “This is not the first by a score of times that we have found this course of conduct pursued by the police, (i.e. keeping a person for days in a condition of restraint without formally arresting him) and one of the main objects of the Divisional Bench in referring this appeal to the Full Bench was that once and for all it should be declared in no uncertain tones, not only that such procedure is illegal, but that is a gross and unwarranted breach of the powers entrusted to police officers ….. It is intolerable that the police should pursue the investigation of crime, by defying all the procedures of the law for the protection of the subject, under the colourable pretension that no actual arrest has been made, when to all intents and purposes, a person has been in their custody.”

The provisions in our country with regard to keeping people in custody without judicial authority enacted in 1898 have lasted through several disturbances like the 1915 riots, several attempts to overthrow the legally constituted governments, a southern and a northern insurgency of the most unimaginable ferocity and several constantly refurbished emergencies. Why this urge to limit individual freedom at a time like the present when the country is really enjoining a well earned peace is beyond reason and imagination. Tourists will refuse to believe that this is a safe country to freely travel in. All this displays an utter lack of sensitivity about the plight of those arrested which cannot be covered by stating that it is being done to arrest an increase of criminal activity in the country. The process is to be used as a form of punishment even before a person is pronounced guilty.

The earlier attempt to limit freedom in times of peace was in 2005 when under Act No. 15 of 2005 stating it was in order to “facilitate the conduct of investigations” the period of detention in police custody was extended to forty eight hours in the case of scheduled offences. Of course it was provided that anyone seeking to extend the period from twenty four hours to forty eight had to within the first twenty four hours obtain an order from a Magistrate for such action. The application had to be done by an officer not below the rank of an ASP and on a certificate filed by him prior to the expiration of the first twenty four hours. The provisions were limited for a period of two years from the date they came into operation. The provisions were reintroduced by Act No. 42 of 2007 with enabling provision for the Minister to extend the period for a further period of two years by a gazette notification. The present attempt appears to be to introduce these provisions as a permanent feature in the Criminal Procedure Code. That is why I say that these provisions under contemplation are unprecedented. In India they would have been struck down as violating the constitution of the country. In India with such a vast population and a higher crime rate the right not to be kept in custody for more than twenty four hours is a constitutional right under Article 22.

This kind of limiting freedom cannot be allowed. This is contrary to all forms of criminal justice throughout the world. It is also a defiant refusal to heed the peoples suffering seriously specially in the formerly war ravaged areas. It is bound to lead to arbitrary, savage and brutal practices especially in a country where from time immemorial at many an instance those wielding political power are in control of many police investigations. Apart from other problems and looking at it from another angle keeping outsiders inside police stations will be an invasion of the privacy inside police stations – outsiders who would turn out to be witnesses to all the activities, good and bad taking place inside police stations. These will undoubtedly lead to other abuses and lawlessness like torture and disappearances and further detention of suspects and witnesses. It’s going to be a vicious chain.

All these lead to questions which should have drawn the attention of the justice Ministry in shaping new types of relief for the people much earlier. One of them, an urgent one, is the right to dignified treatment in custodial institutions and places. Are lock ups and cells inside police stations fit for human use? Are they provided with light and fans? Most cells inside criminal courts right in front of Magistrates are not fit for human occupation even for a few hours. They are highly over crowded and are without lights and fans or any kind of ventilation and judges watch them and impose punishments on those who plead guilty to charges of cruelty to animals by overloading those animals in vehicles while being transported.

It will indeed be a welcome move if this legislation is not enacted in spite of the Bar Association’s invitation.

The author is the President of the Bar Association of Avissawella.

A Life Well Lived with Courage and Compassion

False Promises: The Myth of Security and the Prevention of Terrorism Act

The ‘Punishment Bureaucracy’ and the Normalization of Torture and Impunity