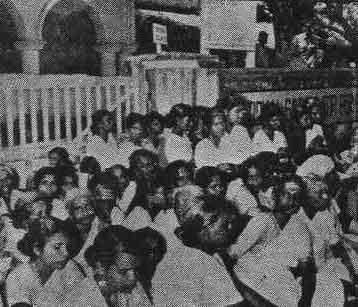 Mrs. B. Thilagamani began her non-violent resistant activism when she was 18 years old and played a key role during the 1961 Satyagraha Campaign. During the Satyagraha Campaign, Sri Lankan Armed Forces (SLAF) brutally retaliated against non-violent campaigners. In their terror campaign of 18 April 1961, Thilagamani was sprayed with SLAF tear gas and her sari was partly burnt. Today, 18 April 2011, marks her 50 symbolic years in non-violent activism.

She still retains her moral spirit, but deeply worries about the current developments in the Tamil national struggle.  Almost a month ago, I tried to record her significant experience in the 1961 Satyagraha Campaign and her remarks on the current Tamil polity.  Two days after a brief discussion on the topic, her health condition became more critical, but has since recalled her memories as much as she can and hopes to record her comprehensive experiences once her health condition has returned to normal.

“Since coming to power in July 1960, the new government – led by Srimavo Bandaranaike – failed to honor its pre-poll pledges made to Ilan kai Thamil Arasu Kadchi (ITAK)[1], known in English as the Federal Party (FP). Moreover, the government began to take steps to implement the Sinhala Act from 1 January 1961, in the day-to-day activities of the government. Hence, the ITAK decided to oppose the implementation of Sinhala as the official language in Tamil areas using the nonviolent civil disobedience campaign of Satyagraha. Their non-violent struggle, which was mainly comprised of sit-ins, leaflet distribution, fasting-unto-death and mourning ceased all functions of government structures in the Northeast for three months, beginning on 20 February 1961. This became the first massive resistance against the government which was suppressed by force. As a volunteer of the ITAK and a women activist, Thilagamani was in the forefront among the protesters during this historic assault.

The SLAF unleashed a violent crackdown- attacking with tear gas, rifle butts, batons and firearms against the unarmed, non-violent protestors. As a symbol of unity, she and some other women launched a fast-until-death campaign. After fifty years, she recollects the following  memories of that period :

About 75 of us, all women, went in two minibuses and a number of cars from our area to Jaffna town, where the Satyagrha took place. Ms. Mankyarkarasi led the women’s wing.  Gradually, the protests became strong. Armed men threw meal packets and used tear gas on us. My sari got partly burnt by their tear gas fired at us, but they could not expel us from the protest site. We shouted, “We want freedom, not meal packets”, and “In the path of freedom gallows is a cotton bed”. The protest was needful and meaningful. It gave a lot of enthusiasm to carry out our future activities through non-violent means. Yet there was an unfortunate incident: due to the armed men’s attack, we lost a friend of mine from our neighboring village, who was a pro-active member of our wing.

I know now I am like a living corpse. I know I am in my last days of my life.  I want to die in my soil, where I born. I want to breathe the air which I have since my childhood. I to die, while our temple bell rings.

On the current Tamil polity, she offers:

The current situation is regrettable and unbearable. We had solidarity from likeminded Sinahal and Muslim people in the East during the Satyagrah period. The young generation during our period was so passionate about our struggle, and their high-level caliber to fight against injustice was marvelous. What we had was moral obligation, fighting spirit, mind of scarification, determination to achieve our rights and hope for the better future, but unfortunately, I cannot see or hear any of the above mentioned at present. Those are fundaments for any struggle. As long as we hold those, the struggle cannot be destroyed forever. Therefore, we have to keep up those attitudes and confidence, until our day comes or we create that day.

Our younger generation has to realize what we had, what we should have, what happened for us and why and how it happened for us, and what the overcoming strategies are in order to regain our rights.

We fought against oppression, but it could not succeed yet. It does not mean that we are completely defeated. If we are confident enough, our roots will lead for the re-emergence. To regain our rights, we learn from the challenges. These learnings should guide our younger generation to fight against oppression.  I do not want to hear anymore our people’s solemn cries. I do not want to see any of my people suffering. I think I cannot lead again, but I still am ready to be in the forefront of the struggle. Maybe before you complete this record, I may die, but note down clearly – if we live, we have to live with dignity and freedom. All other means of life do not have any meaning.  There is no worth for the life without meaningful existence.