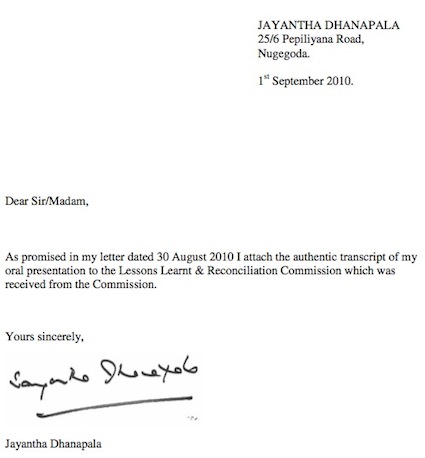 Groundviews exclusively carried Jayantha Dhanapala’s response to erroneous and selective media reports of his submission to LLRC a few days ago, in which he promised an authoritative transcript of his presentation and of the question and answer session from the LLRC.

A covering note to the media from Mr. Dhanapala and the transcripts were sent to us today. Download the transcript here as a PDF, and another PDF noting the members of the LLRC here.

Interestingly, Shamindra Ferdinando, the News Editor of the Island newspaperÂ mentioned on two occasions that he and his newspaper stand by the initial story on Mr. Dhannapala’s submission to the LLRC (see here, and a more detailed explanation of sorts here). Shamindra’s article in the Island, Ex-UN Under Secy General tells LLRC: Intl. laws shouldn’t apply to conflicts between States and terrorist groups published on 25 August, had Mr. Dhanapala ostensibly saying that,

â€œInternational Humanitarian Law (IHL) should not be applied to Sri Lanka’s war against LTTE terrorism and the time is opportune for the country to push for new guidelines. The former head of the Peace Secretariat says a conventional army cannot be bound by international laws in fighting a terrorist organisation, which deploys suicide cadres, child soldiers and human shields.”

The Ministry of Defence website, featuring an article from the Presidential Media Unit of Mr. Dhanapala’s testimony, noted that he had seemingly said “Armed forces should not be charged with war crimes when they launch offensives against terrorists”.

These points, amongst others made in the Island article by Shamindra and others in print and online prompted Kalana Senaratne to write Internal Armed Conflicts, Humanitarian Laws and the Curious Transformation of Dr. Jayantha Dhanapala as a response.

Tellingly, neither in Shamindra’s article nor the article that appeared in the Ministry of Defence website refers to Mr. Dhanapala’s opening comments,

“The recent history of Presidential Commissions has been a dismal and uninspiring one. We have the Udalagama Commission which was aborted and we have a number of Commission Reports which have not been implemented. Nevertheless, the personal stature of all of you as Commissioners and the integrity that is widely respected of yourselves encourages me to appear before you and speak in order that our country can enjoy a future of peace and reconciliation.”

ShamindraÂ notes on Groundviews that “Our report was based on what Ambassador Dhanapala told the LLRC.” However, reading through the official transcript, we can find no mention of what Shamindra, the Presidential Media Unit or the Ministry of Defence attribute to Mr. Dhanapala in their respective news reports.

Update, 5 September 2010: The Island has responded to Jayantha Dhanapala in two articles published today. Int’l laws shouldn’t apply to conflicts between States and terrorists Dhanapala’s denial and The Island and The rules of war as they exist do not meet today’s requirements Dhanapala calls for a new set of rules.

Shamindra’s ‘clarification’ still does not explain how he interpreted from Mr. Dhanapala’s testimony that â€œInternational Humanitarian Law (IHL) should not be applied to Sri Lanka’s war against LTTE terrorism and the time is opportune for the country to push for new guidelines” or where Mr. Dhanapala had categorically said that â€œa conventional army cannot be bound by international laws in fighting a terrorist organisation, which deploys suicide cadres, child soldiers and human shields.”

What Mr. Dhanapala does say is that,

“The primary purpose of International Humanitarian Law is the protection of civilians, and we have been exposed to a terrorist group who have used child soldiers unconscionably; who have used civilians as human shields and who have used suicide bombers to cause mindless destruction of property and the deaths of thousands of innocent civilians. How does a conventional Army of a nation state pursue a conflict with that kind of combatant? The rules of war as they exist today do not cater for that situation.”

That Mr. Dhanapala calls to question the possible responses of a conventional army against the brutality of a terrorist group like the LTTE, and goes on to suggest that IHL as it stands now does not cater to the situation in the Vanni in the final weeks of the war is not a prescription to do away with rules of engagement and IHL, lest we then by extension justify, for example, thousands of civilian deaths in Iraq and Afghanistan by American, coalition and NATO troops in wars against equally brutal combatants who use similar tactics.

The emphasis of Mr. Dhanapala is save non-combatant lives to the extent possible. The interpretation of the Island suggests that were a similar situation arise again, it would be entirely optional for a conventional army to discriminate non-combatants from armed terrorists. Mr. Dhanapala’s submission is a call for Sri Lanka to contribute to an international debate on refashioning IHL based on its experience in militarily defeating the LTTE, which means of course that testimony on what transpired during the final weeks of the war need to make it to the public domain. The Island’s interpretation and reportage, against this necessary accountability, can be strong a foundation for war crimes and crimes against humanity conducted with impunity.