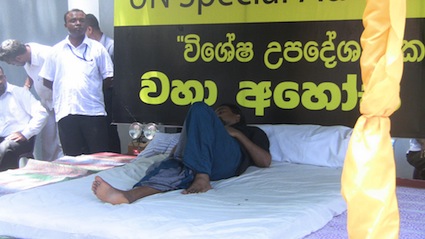 The point of departure for this note is the fast unto death by a government (cabinet) Minister, hereinafter referred to as VW, in front of the UN’s Colombo office. The protest campaign launched by the said individual, and his decision to fast, are meant at demonstrating his party’s (and, being a vocal member of the governing coalition, the present government’s) opposition to the investigative panel appointed by the UN SG on alleged war crimes during the last phase of civil war in early/mid 2009.

The UN SG has been functioning under prerogatives accorded to him in his mandate. The most recent precedent for a panel of this nature is that on Israel’s thoroughly questionable conduct in the Gaza strip, and its recent atrocities over a humanitarian vessel. Let’s not forget that this panel is chaired by Sri Lanka’s Permanent Representative to the UN. How can Sri Lankan diplomats currently posted to the UN explain Minister VW’s anti-UN protests in Colombo to the UN and to fellow diplomats in Geneva, New York and Vienna? The simple way out is to emphasize that Sri Lanka is a ‘democratic state’ where people are allowed to protest, express their opinions and make themselves heard. VW’s protest is therefore not an impediment to the diplomatic interactions between the government of Sri Lanka and the UN. This was precisely the argument presented by the island’s Permanent Representative to the UN during an interview with the Sri Lanka daily Daily Mirror Online, when questioned on Sinhala nationalist opposition to a durable political settlement to the ethnic question in the post-May 2009 phase. To someone even vaguely familiar with recent goings-on in Sri Lanka, the counter-argument is not so difficult to find: what about the countless journalists who were beaten up, assassinated in cold blood and disappeared for ‘expressing’ themselves? What about those critical of the present government and its policies and the manner in which such opposition is strongly suppressed? What about the ban on news websites that adopt a critical stance on the present government? It looks as if the ‘democratic’ nature of the Sri Lankan state and the right of citizens to express themselves freely makes a glorious resurgence from time to time, whenever Â it helps the interests of the present government.

As responsible citizens, let’s look at VW’s protest critically. This is a protest campaign that receives ample tacit support from the highest levels of the present government. The objective seems to be to demonstrate the extent to which citizens are angry at the UN and its SG for their resolve to question the conduct of the Sri Lankan government and military during the last phases of the war. It is also a fine strategy to oust Sinhala nationalist feelings among the wider Sinhala-speaking community, and keep them ‘occupied’ with nationalist candy. In one news website (not accessible from Sri Lanka), it was reported that the secretary to the Ministry of Finance had informed the Minister for Economic Development that a delegation of prospective investors currently visiting Sri Lanka were deeply concerned about VW’s protest. The Secretary had informed the Minister that activities of this nature could have a potentially negative impact on efforts at post-conflict economic regeneration and investment promotion. This may bear a certain degree of truth, but it is unlikely that the present government will be too worried about such a risk. It can run the show as long as it enjoys the support of the Chinese government, the Pakistanis, the Russians, the Iranians, the Burmese and so on.

The present government, with all its flaws and discrepancies, represents the best available option for the Sri Lankan electorate, in a political context where the parliamentary opposition has been sent down the drain for some fourteen years by a single individual whose power within his party remains surreally ‘absolute’ (anecdote: the recent decision of the United National Party to appoint a Council of Leaders, i.e. Sinhalese Nayakathva Mandalaya, instead of replacing its current failed leadership with the energy of a new generation provides ample testimony to the ‘surreal’Â  position of the present UNP leadership). Despite its position of ‘all-powerful winner’, firmly consolidated by combating the challenges imposed by the LTTE, it cannot afford to play constant hard ball with its diplomatic machinery. Despite repeated pleas by the international community (i.e. the EU, the US and national and supranational bodies representing the ‘liberal’ Western power base, not the wider ‘international community’, which includes states of the global south, as Sri Lanka’s present PR to the UNHQ once noted in the same interview mentioned earlier in this article), it is crystal clear that no external power has a strong strategic interest in forcing the Rajapakse administration to draft a political settlement to the ethnic question, on the issue of human rights or alleged war crimes. In this sense, the Rajapakse administration is one of the strongest governments in the world today. Its success in combating its secessionist opponent through military means even surpasses the military feats of the State of Israel. Despite the tremendous support of the West and its military might, the latter has not gained significant victories over the Hezbollah, over the PLO or any of its opponents. While Tel-Aviv is forced to play soft-ball with roaring international criticism over the recent issue of the humanitarian vessel, Sri Lanka’s Rajapakse administration is in a much stronger position to express its thorough opposition to any form of international criticism on its management of the military offensive, a political settlement, the ‘transparency’ of its so-called ‘Lessons Learnt and Reconciliation Commission’ or any related issue. As President Rajapakse categorically stated in his recent interview with Al-Jazeera, concerns over transparency issues are to be shunned, and before such concerns are raised over Sri Lanka, they ought to be raised about USA and UK over Iraq, Pakistan and Afghanistan. Moreover (according to the President), the government of Sri Lanka may indeed look into alleged war crimes during the last phase of the war, but it certainly cannot afford to prosecute anyone for defeating terrorism. In other words, whatever the post-May 2009 (and especially post-April 2010) Rajapakse administration does, whether it be a political settlement based on devolution, a truth commission, dialogue with the Tamil diaspora or anthing else, it will do so solely on its own exclusive terms. This is a salient reality silently understood by the international community, despite its not infrequent nudges on Colombo over issues of concern such as alleged war crimes allegations, which help keep the international news media and vocal elements of the Tamil diaspora occupied.

In such a political zeitgeist, it is thoroughly pointless for the present government to support initiatives such as that of Minister VW over the UN allegations. The fundamental flaw, as this writer perceives it, is in the relatively remarkable absence of a diplomatic strategy that corresponds to the needs of the present Sri Lankan government (i.e. the post-LTTE, or post-:May 2009 phase). Â One cannot help reaching the conclusion that what inhabits the Republic Building in Colombo is a diplomatic machinery with strong lacuna in terms of strategy and diplomatic foresight. One commentator recently compared Sri Lanka’s Minister of External Affairs to an adult with candy (i.e. Sinhalese seeni boola) in his shirt pocket, who gives candy to cheeky kids to keep them (i.e. in this analogy, members of the international community) happy and calm. The role of the Sri Lankan External Affairs Minister certainly is in par with this ‘candy-man analogy; it can be noticed whenever he is brought to deal with his counterparts in the international community, such as during his recent visit to the USA, which included a lecture at CSIS Washington DC. Like a player unfamiliar with the rules of the game but still playing away, the Minister attempts to chat up the US government and the UN’s high command on Colombo’s tremendous military feats and its resolve to examine alleged war crimes, in the form of a commission inspired by the South African TRC and the UK’s Chilcot Commission (NB: the minister makes these observations in his CSIS speech, available in the South Asia section of the CSIS website). In his candy-man role, the Minister (and, very obviously, the entire diplomatic corps) fails to utilise the existing trend in international politics vis-Ã -vis Sri Lanka to the advantage of the Sri Lankan state. The government of SriÂ  Lanka is in a strong position to express firm diplomatic opposition to the UN SG’s move. If a right-minded diplomatic strategist headed the Republic Building today, they could effectively utilize the prevalent situation (i.e. UN SG’s panel vs. the international community’s lack of a strategic interest over Sri Lankan issues) to actively promote the Sri Lankan government, make its voice heard in the international scene as a strong state that defends its interests diplomatically, and despite its firm (and realistically speaking,Â  inevitable) resolve to manage post-conflict concerns on its own terms, it is a government capable of strong international alliances, in terms of economic, cultural and educational cooperation. Instead of working through the present situation to make things more profitable to the Sri Lankan government, and make it possible for the Head of State to shake hands freely with any of his Western (i.e. EU and NATO member states except Turkey in the latter case) counterparts ASAP, thereby categorically reconfiguring Sri Lanka’s image and position in the international scene, the government is engaging in low-level petty politics by using its local mouthpieces such as Minister VW to stage protests in front of the UN, deporting HR and NGO activists and stating on international media that a former army commander should be killed on charges of treason. Despite its quintessentially Spartan capacity to reach the strong position it currently finds itself in, those heading the Rajapakse administration’s executive, national defence and foreign policy establishments have amply proven, a year into the post-Piraba phase that they do not possess that shrewd Athenian strategic maturity to work their way around Lanka’s renewed position in the post-2009 international political landscape. This situation explains the farce (better expressed in Sinhalese/Tamil nadagam) currently taking place in Colombo city, which includes carnival items such as (rather childish) anti-UN protests, blocking and barricading international ground, diplomatic visa refusals and deportations.

Issues of Truth and Accountability: A Private Sector Perspective