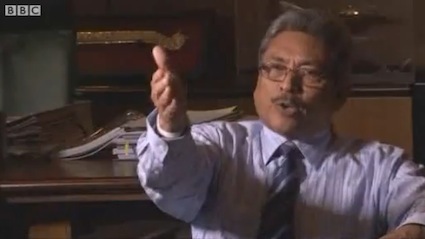 Many readers may have seen if not read about Defence Secretary Gothabhaya Rajapaksa’s interview with Stephen Sackur of the BBC HardTalk programme in which he calls Sarath Fonseka a liar and threatens to hang him for his position on a war crimes investigation. Local opinion, not surprisingly, given the current political context, has been divided on the propriety of Mr Rajapaksa’s outburst and the damage it could do to the image of the regime and of the country internationally.Â  There are the shocked and perturbed, albeit mostly in private, on the one hand and on the other, the hallelujah chorus of the apparatchiks. According to them, Mr Rajapaksa showed Sackur what’s what and saw off the smug arrogant, hostile Occidental propagandist with panache!

My concern here is to inquire into what this interview and the response to it tells us about the state of governance in our country, post â€“war and once more on the verge of constitutional reform.

Were such an event to have occurred in India, the world’s largest democracy or in Britain from where our parliamentary traditions and conventions of governance hail, the public servant would have had to resign and if he did not, he would have been sacked.Â  Were the latter action not taken, the government of the day would be in jeopardy.Â  Public opinion and the media would bay for its blood.Â  The rationale for all of this being that in functioning democracies, public servants are not supposed to make policy pronouncements of their own, voice their personal opinions to the international or local media or make statements that are tantamount to the grossest interference in an issue, which is the subject of an ongoing judicial process.

Was Mr Rajapajsa merely expressing government policy, the policy of his brother, his minister and president? Or, since no action has been taken, is it the case that this a case, not of Yes Minister but of Yes Secretary?

It is indeed sad that Mr Fonseka apart, members of parliament have not seen it fit to raise what is surely a privilege issue.Â  A secretary to a ministry has in effect called a MP a liar and traitor on international television and pronounced that he should be hanged.Â  It is also sad that there has been little comment or observation of the insight this affords us on the state of governance in the land.Â  Is Gothabaya Rajapaksa a one man deterrent to discussion and dissent â€“ the lifeblood of democracy?Â  Does one decisive military victory and two thumping electoral mandates to his brother and by extension his family, give him the licence to mouth off maliciously in flagrant violation of the dignity and propriety of the office he holds?

Given the impending revocation of the Seventeenth Amendment and the jettisoning of the Constitutional Council and independent commissions it provides for and the removal of the term limit on the presidency, the structure of power and government in the country will be shoved further away from the structure of power and government that characterizes democratic governance.Â  Those who railed against the executive presidency and promised loudly to abolish it are to entrench it instead and with it no doubt, the arbitrariness and caprice of a monarchy and dynastic rule.

The nature of the regime and its rule are profiled by the defence secretary’s vituperative interview, the priorities for constitutional reform in the current context of limbo between the post war situation we are in and the post-conflict one we should aspire to and the reported appointment of who is now frequently referred to as the First Son, 24 year old fresher MP Namal Rajapaksa to head the District Development Committee for Kilinochchi!Â  More Crown Prince perhaps than First Son, being given war ravaged Killi to dabble in development?Â  Is there a precedent here of Killinochchi becoming the local Duchy of Cornwall?

The gratitude and appreciation of the citizenry for the defeat of the LTTE and expressed in two thumping mandates for the Rajapaksa family should not blind the citizenry to the dangers of authoritarianism and the corrosion of governance.Â  Nor should we allow fear to silence protest and resistance to this and then wallow in regret for our complicity and appeasement at a later, god forbid, much later date.Â  Whoever rules, whoever governs and for how long is not the issue. There must always be, as a basic minimum, checks and balances, the rule of law, due process, best practices and standards adhered to, rights protected and duties fulfilled.

[Editors note: An outrageously edited version of this article was published in the Daily Mirror on 23 June. Even post-war, the obsequiousness of mainstream media towards the Rajapaksa triumvirate in general, and the Defence Secretary in particularÂ is a stark reminder of sustained self-censorship and a Fourth Estate -Â out of fear or seeking favour – unable and unwilling to bear witness to the systemic breakdown of democratic governance.

24 June: It turns out that yesterday’s fiasco over the partial publication of this article in the Daily Mirror was down to gross editorial negligence. Bordering on the tragi-comic, that this article was published in an appallingly edited form was only known to senior editorial staff after Groundviews pointed it out. One wonders what the Daily Mirror would have done if we did not flag the issue, or what impression readers of the truncated article in online and print versions of the paper would have been left with, were it not published on this site. Thankfully, the article in fullÂ appears in the paper today. However, there is still no mention in yesterday’s version published online that the article is an incomplete version, or a link provided to the full version that is published today. Inexcusably bad editorial policies exacerbate government censorship and control of media. If one must be the change one wants to see, mainstream media has a very long way to go.]