Today, over 14 million Lankan voters get to elect a new government. They can also pick from among 7,620 candidates vying for 225 seats in the national legislature.

The election campaigns for the past many weeks have seen the usual glut of rhetoric and promises. Our endlessly bickering political parties rarely agree on anything, so it’s refreshing to see a broad consensus on what this election is fundamentally about: future prosperity.

That’s no coincidence. This is the first time we elect our law makers since the long drawn and brutal civil war ended in May 2009. We have been looking backÂ — or nervously looking around — for much of the past three decades. It’s about time we finally looked forward.

How we wish Sir Arthur C Clarke was still with us at this crucial juncture in our history! For half a century up to his death in March 2008, the author, explorer and visionary was Sri Lanka’s amiable ‘tour guide’ to that ‘Undiscovered Country’ called the Future.

Whoever wins this week’s election, shaping a better future will need clarity of purpose, hard work and persistence. Those looking for long term vision can start with the substantial volume of essays, interviews and speeches that Clarke has left behind. These form a veritable treasure trove of practical and pragmatic advice from the man who, during his illustrious career, commanded respect in both the White House and the Kremlin — as well as in Hollywood, Silicon Valley and other global centres of hard or soft power.

Clarke often said that there was an infinite array of possible futures: our actions (and inaction) determine which one becomes real. We create our own futures through our choices at individual, family and national levels.

â€œDespite all claims to the contrary, no one can predict the future,” he used to say. â€œI have always resisted all attempts to label me a ‘prophet.’ I prefer the term ‘extrapolator’.” 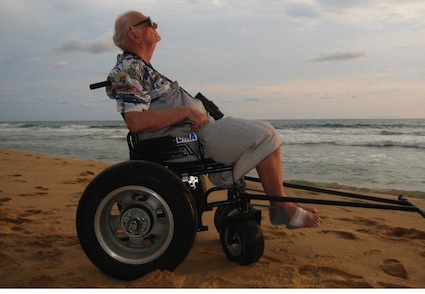 Clarke was no armchair soothsayer — he had vivid imagination, but also knew the limits of crystal ball gazing. â€œWhat I have tried to do, at least in my non-fiction, is to outline possible ‘futures’ — at the same time pointing out that totally unexpected inventions or events can make any forecasts absurd after a very few yearsâ€¦”

While imagining scenarios for humanity’s evolution and place in the cosmos, Clarke took a special interest in Sri Lanka’s near-future prospects. For half a century, he remained a ‘critical cheer-leader’ for the island nation’s march to progress.

As he summed up in 2005, “During the time I lived here, I have seen my adopted homeland advance in various ways, but sometimes it has also taken wrong turns. If we have the humility to learn from past mistakes, the next half century can be far better than the last.”

This cartoon by W R Wijesoma appeared in ‘The Observer’ newspaper in late 1960s. It shows leading politicians of the day seeking Clarke’s predictions for their futures!

Clarke’s guidance for Sri Lanka’s future development touched on many aspects, such as improving the quality of education, expanding coverage of telecom services and diversifying the mix of energy sources. As a diver, he also advocated conserving the coastal and marine environments.

He placed much value on investing in people. Having achieved impressive feats in health and education, he said, Sri Lanka’s next step was “not so much to add years to life, but to add life to years“. Future economic growth would have meaning only if it was socially and environmentally sound — and if the benefits were shared more equitably, he said.

But Clarke’s vision for his island home stretched beyond simply raising the Gross National Product (GNP) or building infrastructure. Adept at relating the micro with macro, he foresaw emerging trends ahead of many. He also tried to prevent undesirable futures from happening.

For example, he watched with concern how Sri Lanka’s population more than doubled in two generations since independence. He was an unhappy witness to the once idyllic island being torn apart by ethnic strife and ultra-nationalism. Managing human numbers and human diversity was among the biggest challenges he identified for Sri Lanka in the 21st Century.

In the last two decades of his life, he repeatedly called for greater tolerance and harmony among the various ethnic and religious groups all of who call Sri Lanka their home. He cautioned: â€œWe should not allow the primitive forces of territoriality and aggression to rule our minds and shape our actions. If we do, all our material progress and economic growth will amount to nothing.”

He chose strategic moments to renew his plea for a peaceful end to the Lankan war, such as the golden jubilee of political independence (1998) and the aftermath of the Asian tsunami (2004).

Clarke never gave up hope, even when conditions looked particularly bleak. In a short video message released in December 2007 to mark his 90th birthday, Clarke listed ‘lasting peace in Sri Lanka’ as one of his three last wishes in life. Alas, he never lived to see any of them come true.

Some of the best brains on the planet are currently working on his other two wishes — detecting signs of alien life, and developing clean energy sources. Meanwhile, we Lankans must now consolidate the hard-won peace while healing the wounds of war.

Clarke’s vision can still guide us in this daunting task. Here’s a typical gem: â€œI’m optimistic that the land that has shown tremendous resilience over the centuries, and practiced a rare type of tolerance, could still return to normalcy â€“- although we should ensure that grounds for conflict are eliminated forever.”

That’s easier said than done. But if Clarke were alive, he would tell us that the alternative is far worse. Voting for the Undiscovered Country is only the first step in a long journey.

Science writer Nalaka Gunawardene worked with Sir Arthur Clarke for 21 years (1987 â€“ 2008) as his research assistant, and blogs on media and society at: http://movingimages.wordpress.com