A couple of days ago (26th), I travelled along the South Coast, leaving Colombo early in the morning. I was with a friend who had come here to film some stuff relating to the second year since the tsunami. A translator also accompanied us.

Our first stop was Peraliya – that place where the wave got the train killing some 1,200 people. To mark the second anniversary, a giant Buddha statue (based on the one that was blown up by the Taliban) was going to be ‘opened’ by the President and other digniteries. We didn’t want to hang around, and kept heading down the coast.

Around 9am, we came across a small church. They were going to hold a service that included both Buddhist monks and Christian priests – a dual-denomination event. It was small and there was a sense of intimacy. We hung around and filmed parts of the service. There’s a long way to go – according to some who spoke. And there was general criticism of the Government and its response to the reconstruction. 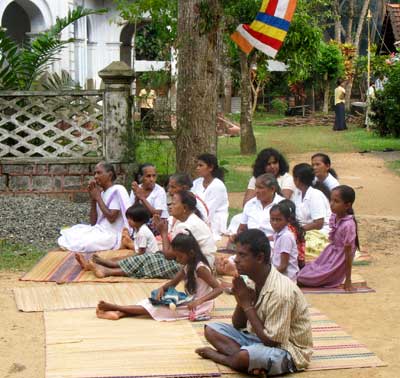 A couple of hours later, we stopped near some fishing boats and talked to the local fishermen who were gathered around. Most of them weren’t working on the day – out of respect for their lost friends and family members. They too were critical of the Governme nt, saying that the people who helped them the most were individual foreign volunteers who came and helped with the cleaning up, and provided them with money to rebuild their houses. One man expressed how he and his family had to live in inadequate temporary housing for 12 months before he could raise enough money to re-build his house.

On the beach, we came across an angry man. He appeared slightly drunk, and got agressive towards our translator, accusing her of not telling us the proper story. He hoped another tsunami would come and kill everyone who was at the big official ceremony back at Peraliya. He said the poor will always be poor, claiming it was those with privilege and connections who always benefited.

There were small events in temples along the coast, though at Unawatuna beach, it was business as usual. Lots of overweight Europeans soaking up the rays of the sun. We asked one of the waiters if he knew of any commemoration events. He smiled politely and said he didn’t know and continued serving the customers.

I/NGOs: Mea Culpa… Your Culpa… or Our Culpa?