In June 2022, Sri Lanka was thrust into the international spotlight during the tour of the Australian cricket team which coincided with the recent political and economic crisis in the country. The public’s reaction to the tournament was mixed; some criticized the shift in focus towards a sporting event while citizens were experiencing extreme difficulties in their daily lives, while several others focused on the tournament’s potential positive impacts. A similar debate was raised once again with the recent decision by Sri Lanka Cricket (SLC) to shift the Asia Cup to the UAE from its initial venue in Sri Lanka. This then begs the question of whether or not hosting international sporting events such as cricket tournaments during this sensitive period is beneficial for the country and how it may be done if at all possible.

According to analysts, the current economic adversities are a result of the lack of both foreign currency earnings and government revenue to meet the necessary expenses due to a variety of underlying causes. Tourism which has remained among the top three foreign exchange earners of Sri Lanka in particular has suffered from multiple crises since the Easter attacks in 2019. In such a situation, hosting an international sporting event can be helpful to boost the sector by encouraging visitors. Sports tourism is in fact recognized by the World Tourism Organization as a rapidly growing area. Since tourist arrivals are influenced by the perceptions of the destination, an international sporting competition can not only attract fans for that specific event but also provide positive branding to promote the country for future visitors, which is useful since the number of spectators is limited by the capacity of the venue. Aside from attracting foreign exchange to the country, such a sporting event can provide much needed income for local businesses in the vicinity and support them in improving their financial position and retaining employees. This in turn would translate into higher tax income for the government and less reliance on welfare payments.

Beyond tourism and ticket sales, international sporting events also generate income through the sale of broadcasting rights and sponsorships. Currently Sony Pictures Networks India (SPN) has been awarded the Global Media Rights for Sri Lanka Cricket’s Inbound Tours for 2020-2023. According to one source, it’s estimated that the initial bid was around US$ 22.5 million. Although such deals might not have a major impact on the wider economy, they are an important source of revenue for a sporting body allowing them to fund their operations including welfare activities. Since the value generated through such transactions depend on the performance and popularity of the team, it is also important to create opportunities to showcase the skills of the players. Beyond these financial benefits, sporting competitions are known to have numerous psychological benefits such as providing fans with an opportunity to relax, fostering a sense of solidarity with fellow citizens and building stronger ties between countries.

Hosting international tournaments is undoubtedly a costly process which include expenses on operating the venue, employing staff, and providing facilities such as lodging, food and transport for the teams and other personnel. The unique advantage in the case of cricket is that Sri Lanka already possesses the basic infrastructure and experience required to host large scale competitions. The country currently owns multiple international cricket stadiums. In the 1970s-80s the major venues for international matches were within Colombo with the Kandy Asgiriya and Galle stadiums being the two exceptions. The High-end neighborhoods of Colombo were home to stadiums such as the Sinhalese Sports Club and the Colombo Cricket Club while other stadiums renovated to meet the international level included the Khettarama Stadium (later named the R. Premadasa Stadium) and the Paikiasothy Saravanamuththu (P Sara) stadium. The first of the two is one of the largest in the country with a seating capacity of 35,000 while the second has a capacity of 15,000. Construction of large-scale stadiums beyond Colombo began in the 2000’s and consist of the Rangiri Dambulla International Stadium with a capacity of 30,000 as well as the Pallekele and the Sooriyawewa Stadiums (later named the Mahinda Rajapaksa International Stadium) with a capacity of 35,000 each. Yet, whether these resources have been put to their best use is debatable.

For instance, in October 2016, former Sports Minister Dayasiri Jayasekara revealed in a Tweet that the cricket stadium that was built spending Rs. 4.2 billion in Hambantota is being hired for wedding receptions in order to generate revenues. According to Jayasekara, the opening and closing ceremonies of the 2018 Commonwealth Games were supposed to be hosted at the stadium. However, Sri Lanka lost the bid. The Sooriyawawa Mahinda Rajapaksa Stadium has hosted only 6 international matches suggesting that this is yet another white-elephant project completed under poor guidance.

On the other hand, this also indicates that there is untapped potential in promoting cricket-tourism in the country. For instance, India, the United Kingdom and Australia boasting internationally renowned cricket teams have also consistently been among the top 10 sources of tourists to Sri Lanka. As such, focusing on competitions that involve these teams could have a positive impact on the economy. 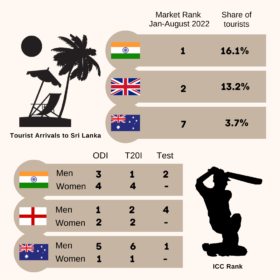 Having said that, there are certainly challenges that need to be addressed. Although Sri Lanka has achieved some stability recently, continued shortages of certain goods, disruptions in power and limitations in fuel supplies can raise concerns among potential visitors. In this context, it’s unclear whether organizing a large-scale international competition involving multiple teams is within the country’s capacity at the moment, as was the professed case for the Asia Cup. Along with this, there is also the issue of public perception shaped by fears of political unrest due to the sensationalized international headlines during the preceding months. Finally, at a global level too, we are at a critical point in time where travel restrictions have been eased since the pandemic on one hand, but a global recession is looming in the horizon on the other.

This being the case, it’s necessary to identify strategic opportunities and make use of existing resources in a timely manner to promote sports-tourism in Sri Lanka. Indeed, as a cricket playing nation and also a reputed tourist destination that has attracted spectators and visitors from far and wide, Sri Lanka now has the potential to navigate through these trying times by remaining proactive.

Facades of Development: Of Commonwealth Games and Drag Racing at Green Path