October was a bleak month for freedom of expression with four cases of assault against five provincial journalists. All five journalists had to be hospitalized. A camera was lost in one instance and one was damaged in another incident. There was data loss in one case. Police have arrested suspects related to all cases; some are still in remand in custody while others have been released on bail. But there is doubt whether those responsible will be held accountable. At least two of the journalists, who had also been subjected to previous reprisals, have expressed concerns about their security. Two of the incidents were connected with journalists’ attempts to expose illegal logging and sand mining. After the incident related to illegal sand mining, the permit issued to the miners was cancelled and a new process consisting of a multi-agency district committee was set up to issue permits. Media organizations issued statements condemning these incidents and protests were held in the aftermath of at least one incident.

There were also other violations. One person was arrested due to free expression online. An indirect threat was leveled against those criticizing the Army for alleged shortcomings in their treatment of suspected COVID-19 patients. Journalists covering the Easter Sunday bombings were chased away and authorities cited COVID-19 concerns in barring journalists from covering parliamentary proceedings.

The month saw the passage of the 20th Amendment to the constitution, which is detrimental to free expression. Memorials were held for a journalist who was slain 20 years ago this month, highlighting that no one has been held accountable to date. An online news site carried a series of reflective features on journalism. Media outlets were found to be violating media ethics in their reporting, especially in relation to COVID-19 patients. Hearings in the trial of a disappeared journalist was postponed due to COVID-19 curfew. The detention of an outspoken lawyer was extended by three months and court hearings was postponed for four months. An online commentator who was released in September after five months in detention said that he is practicing self-censorship due to the continuing case against him.

Incidents during the month

Attack on journalist in Moneragala district

On October 3, Derana TV journalist Mr. Indunil Wijenayake was assaulted by sand miners while covering an illegal sand mining operation in Moneragala district. He was treated at the Moneragala District Hospital. His camera was damaged during the attack. Indunil mentioned that two persons had been arrested and later released on bail. After a hearing on October 27 at the Moneragala Magistrate Court (case no. 96/297/2020), the hearings have been postponed until January 2021. The Free Media Movement of Sri Lanka condemned the incident and called for justice.

Attack on journalist in Trincomalee district

On October 11, Mr. M. H. Yusuf, a provincial correspondent for Independent Television Network (ITN) was assaulted while reporting on an accident in Trincomalee District. During the assault, he also lost his camera. A complaint was lodged with the Agbopura police (complaint no. CIB 132/71). Yusuf mentioned that three persons were arrested and presented before the courts for an identification parade but he was not able to identify them as he had been nervous at the time of the incident and there had been many people. The Muslim Media Forum condemned the incident.

On October 12, two Tamil Guardian correspondents, Mr. Kanapathipallai Kumanan and Mr. Shanmugam Thavaseelan, were verbally threatened and physically attacked while investigating an alleged timber trafficking operation in Mullaitivu district. The journalists’ attackers wiped most of the documentation they had taken of the deforestation and removed their memory cards. The attackers also stole their money and jewelry and filmed the journalists on their mobile phones while accusing them of trespassing. After the incident, Kumanan and Thavaseelan were admitted to Mullaitivu Base Hospital for treatment. Members of the Jaffna Press Club protested about the attack in front of the Mullaitivu District Secretariat, police station and District Forestry Office.  According to a media report, one suspect who has permanent residency in Norway has been given bail while the three other suspects have been remanded in custody. The case is scheduled to be taken up again on November 3 in the Mullaitivu Magistrate court (case no. B 1691/20). The incident was condemned by several media organizations such as the Jaffna Press Club, the Muslim Media Forum, the Sri Lanka Working Journalists Association (SLWJA) and the Free Media Movement of Sri Lanka (FMM).

Assault on journalist  in Gampaha district

According to Mr. M. H. K. Jayantha, President of the Gampaha District Journalists Collective, Mr. Manoj Edirisinghe, a Sirasa TV correspondent residing in Mirigema, was assaulted and had to be hospitalized for several days with injuries to his face and an eye. The incident occurred on October 19 when the journalist was returning home after work. A suspect has been produced before a Magistrate and has been remanded until November 3. The incident has received some media coverage.

Police are reported to have arrested a woman on or around October 18 for uploading a video on Facebook with content that is alleged to have hateful content against the Catholic Archbishop of Colombo. She has been remanded until November 2 for having committed offences under the Computer Crimes Act and Article 291A of the Penal Code.

The Administrative Secretary of the Archdiocese issued a statement saying that the video released on social media had false, unfounded, insulting and misleading content and that complaints had been lodged with relevant institutions.

Lawyer Gehan Gunatilleke examined the contents of the video and expressed the following opinion: “The police should not be involved in the matter and if the content is interpreted as defamatory, the targeted individual may have a remedy in civil courts. The contents are directed entirely at an individual, and not at a national, racial or religious community. It certainly does not advocate hatred constituting incitement to discrimination, hostility or violence. So, the act does not fall within the scope of section 3 of the ICCPR Act. Although there are some references to Buddhism, neither does it fall within the scope of the Penal Code offence on wounding/outraging religious feelings (sections 291A or B), as there is no direct attack on any religious community.”

Threatening remarks to critics by the Army Commander

The Commander of the Army, who also heads the COVID-19 prevention center, made threatening statements after facing criticism in the media and complaints to the Human Rights Commission of Sri Lanka (HRCSL) for the Army’s alleged mistreatment of apparel workers suspected of having COVID-19. The complainants to HRCSL had made the Commander a respondent. The Commander termed the allegations “unfounded and fabricated” and stated that “all those intentional fabrications bear the hallmarks of a precursor to a bigger future machination the interested elements are now mapping out in order to tarnish or ridicule the role of the troops”.

Journalists chased away from premises of Easter Attack Inquiry Commission

On October 23, journalists who went to cover proceedings of the Presidential Commission of Inquiry into the Easter bombings were reported to have been chased away from the premises by the Chief Executive Officer of the Bandaranaike Memorial International Conference Hall (BMICH) where the hearings are being held. This occurred after the journalists were instructed to stay outside during closed-door hearings. The media report indicated that when closed door hearings were held previously, seats were provided for journalists to sit and wait outside the hall where hearings were taking place but that these facilities were not available at this hearing. 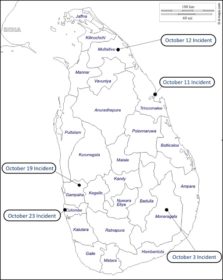 Other significant trends and events

20th Amendment to the constitution

The 20th amendment to the constitution was passed in parliament on October 22. Before its passage, the amendment was criticized as a threat to democracy, human rights and freedom of expression by the Free Media Movement of Sri Lanka and human rights lawyers.

On October 19, there were several events across the North and East to remember slain journalist Mylvaganam Nimalarajan. Nimalarajan was assassinated 20 years ago on October 19, likely to be due to his investigative journalism on elections in Jaffna in 2000. No one has been held accountable for his death.

The website www.medialk.com carried a series of opinion pieces on journalism. Highlighted points include the value of professionalism, ethics, revealing the truth and giving hope for a better future. One commentator stressed the importance of media institutions committed to the people focusing on public good, instead of being driven by government and capital. Another commentator emphasized that journalism should be being driven by extensively researched information, facts and data, and not based on feelings.

During September, Ethics Eye Facebook page and Twitter account highlighted unethical reporting by various media outlets on topics such as COVID-19 patients, suicide and sexual abuse. There were also derogatory references and negative portrayals of women, non-Sri Lankan citizens, drug users, ethnic and religious minorities. Ethics Eye noted media outlets’ failure to consider ethics in reproducing violent images, pre-judging the guilt of the accused and exposing private and personal information. The Director General of the Government Information Department noted violations by the media of recommendations issued in relation to coverage of funerals of those succumbing to COVID-19 and requested the media to abide by these recommendations. The College of Community Physicians of Sri Lanka called for regulations to control the illegal disclosure of COVID-19 patients and their contacts by the media.

Updates on incidents in previous months and years

On January 25, 2010, journalist, cartoonist, and political activist Prageeth Eknaligoda disappeared shortly after leaving work at the Lanka E News office. In November 2019, indictments were finally served on nine army officials in connection with “kidnapping and conspiracy to murder” Prageeth Eknaligoda. Hearings at the special three-bench Trial at Bar in Colombo were postponed from March due to COVID-19 and resumed in September. However, hearings scheduled for October 26 and 27 were postponed because the area where the Court is located was subjected to COVID-19 related curfew.

On October 28, detained lawyer Hejaaz Hizbullah’s hearings were postponed due to restrictions on court functioning during COVID-19 curfew. The next hearing was scheduled for February 24, 2021. Earlier in October, a new three-month Detention Order was issued for Hizbullah. He has been held for more than six months without being produced before a magistrate, having meaningful access to lawyers or a fair trial. Hizbullah’s detention is likely a reprisal against his legal practice and outspoken views and advocacy on minority rights.

Social media commentator released on bail says he is self-censoring

After about one month after being released on bail, blogger Ramzy Razeek published reflections in Tamil and Sinhalese about his imprisonment because of a Facebook comment. In his commentary, Razeek stated that his overestimation of the right to freedom of expression led to his arrest and detention. Razeek concluded his commentary by saying that he is subjecting himself to self-censorship as the case against him is still being heard in courts. He was first arrested on April 9, 2020. After many delays in court hearings and five months of detention in difficult conditions during which his health deteriorated, he was released on bail on  September 17. The judge who ordered his release on bail emphasized the right to freedom of expression and criticism.

Destroying monuments for those killed & disappeared: The Catholic Church and the Sri Lankan Government