Photograph via video produced by Institute of Development Studies

There is broad consensus that women’s empowerment underpins the success of the new 2030 Agenda for Development (also known as the Sustainable Development Goals). While gender equality itself constitutes one of the seventeen development goals (Goal 5), it is widely acknowledged that the empowerment of women and girls is an important prerequisite for the realisation of all other goals, including the reduction of poverty (Goal 1), inequality (Goal 10) and the promotion of inclusive and sustainable economic growth through decent work for all (Goal 8).

This new development agenda also has an important focus on unpaid care work. Accordingly, target 5.4 of the Sustainable Development Goals (SDGs) calls upon nations to ‘recognize and value unpaid care and domestic work through the provision of public services, infrastructure, and the promotion of shared responsibility within the household and the family’

Unpaid care work – which refers to all unpaid services provided within a household for its members, including care of persons, domestic chores and voluntary community work – is an area that has long been neglected by economists. Traditionally, this work was considered to be ‘women’s work’, performed in the ‘private sphere’, for the benefit of ‘loved ones’. Because women take on unpaid care work in their capacity as mothers, grandmothers and wives, it is assumed that their labour is motivated by factors other than financial reward. Although this analysis holds true, it ignores a more pertinent point: traditional norms and customs assign care work to women irrespective of their willingness or ability to undertake unpaid care work. This is best evidenced by the fact that women who are engaged in paid employment still bear the responsibility for taking care of the household and the family.

Globally, women bear disproportionate responsibility for unpaid care work. This is largely because prevailing gender norms define domestic work as a female prerogative. Studies reveal that over 75% of the world’s total unpaid care work is done by women. In South Asia, and Middle East and North Africa (MENA), this share is much higher, with women undertaking nearly 80-90% of total care and domestic work in the economy. Time-use data from across the world support these findings: statistics from six different countries – with varying income levels and socio-economic structures — reveal that women everywhere devote 1 to 3 more hours each day to housework than men; 2 to 10 times the amount of time a day to care (for children, elderly, and the sick), and 1 to 4 hours less a day to market activities (Figure 1). Notwithstanding minor differences, it is clear that this trend holds true in almost every region of the world (Figure 2). 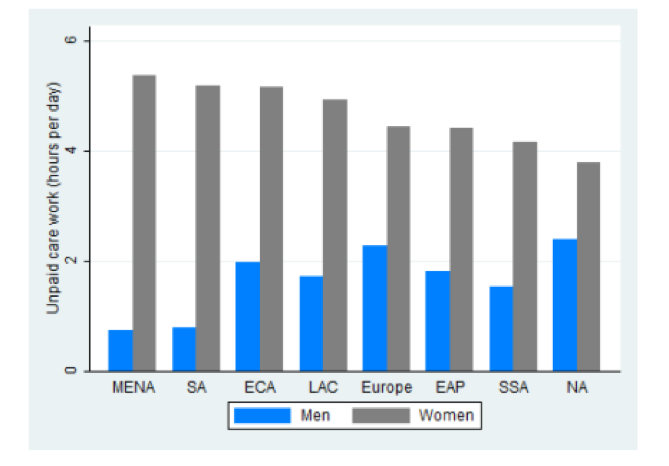 The gendered distribution of unpaid care work has important implications for the well-being of individuals and households, as well as for economic development in a country. It has a direct effect on labour market outcomes, particularly with respect to women’s labour force participation, wage distribution, and job quality. It also has direct, negative impacts on the health and well-being of women. It is in light of this revelation that Diane Elson, professor of Economics at the University of Essex, developed the 3R Framework, which calls on countries to Recognise, Reduce and Redistribute unpaid care work in the economy. This framework has now been widely adopted by the international development community, including the United Nations and the Organisation for Economic Co-operation and Development, as an effective strategy to empower women as economic actors. However, many countries continue to exclude unpaid care work from their policy agendas.

Sri Lanka too remains blind to all but paid, visible forms of women’s economic contribution. This has led to significant gaps in economic policymaking and governance. Outlined below are the some of the reasons why Sri Lanka should address the unequal distribution of unpaid care and domestic work in the economy.

While anecdotal evidence may highlight the inherent gender disparities in unpaid care and domestic work in Sri Lanka, the country lacks comprehensive data to inform policymaking. At present, Sri Lanka does not conduct any nationally representative time-use surveys, which could effectively capture the distribution of care work between men and women in the country. Collection and dissemination of data is vital to informing policies that would reduce the burden of care work on women and redistribute domestic responsibilities among men and other institutional actors in the economy. Sri Lanka should further consider the need to improve policy readiness to achieve the SDGs. If the country hopes to stay on track, it must work immediately to address the issue of unpaid care work – a target that is indispensable to the attainment of Goal 5 of the SDGs.