Though Sri Lanka often promotes the fact that it elected the first female Prime Minister as an example of its progressive stance on gender inequality, some Sri Lankans can’t stand to see a strong woman hold her own without giving into a seemingly innate need to tear her down. A strong, opinionated woman who is willing to face her oppressors head on is the anti-thesis to the patriarchy most of them have been fed since birth. This type of woman runs counter to what they’ve been raised to expect from females in general – quiet, docile, and with a pleasant physical appearance, as determined by their gaze.

Perhaps it’s most visible online, since we’re all drowning in our digital existence and the comments and memes are too hard to ignore. While the harassment of women online is not specific to a particular type, those who step out with confidence in themselves and in their convictions, are often torn down solely because some can’t stand to see that strength – the most recent being the spate of memes that Lanka Comic Con 2017 generated.

Lanka Comic Con annually brings together lovers of science fiction and fantasy for a few days of entertainment, learning and sharing. The experience includes sales of original art and craft, discussions by leading local and international authors and artists and many well-loved cosplay shows. It encourages visitors to be themselves, and is hailed by many for being a platform for self-expression and creativity that is quite different to anything else Colombo has to offer.

I was there on Day One, awestruck at the work put in by amazing people to bring their favourite fictional characters to life. There were several variations on Wonder Woman, each looking equally stunning, bringing to a familiar character touches of their own personality, as cosplay allows one to. My sister herself went as Supergirl on Day Two. Far more unapologetic and body-confident than me and while we agree on absolutely nothing, she owned that costume.

It was barely 48 hours before certain Facebook pages started making memes that bodyshamed the cosplayers, labelling them too skinny or too fat, taking the photos they had posed for with pride and turning them into a mockery. The comments became more and more appalling, filth laced with male privilege and bitter comments from other women too – which was far more upsetting. (Translation of original comment (one of the milder comments that were posted by these pages): “She looks like a Roman soldier from the Asterix comics”)

Before that, it was Meliza Leitch – proud of her body and her achievements, she chose to share her fitness progress on Instagram, as was her prerogative. And that too, spiralled into a ridiculous discussion about values and culture and ‘maybe she shouldn’t have shared so much’ or ‘there are people who have struggled more than you’.

Then, there was Ermiza Tegal – a human rights lawyer who addressed the problematic Muslim Marriage and Divorce Act (MMDA) which many community members are campaigning to reform, on a BBC Sinhala Facebook Live chat. The sexist comments were coupled with racist ones in this instance, all directed at someone who whose work and dedication to helping people speaks for itself. 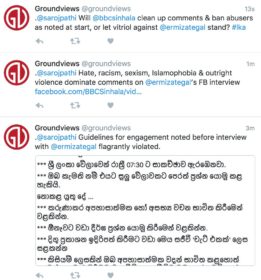 Before that, there was Bhoomi Harendran. Her confidence radiates whenever she’s speaking, so of course some bigot asked her, at a public forum, if she didn’t feel ‘weird’ to be transgender, and people proceeded to make rude posts about her body and genitalia. One of the country’s foremost LGBTIQ activists, a trailblazer in her own right, and people couldn’t stand to see someone who doesn’t fit into their black and white image of what a woman should be speak out.

That’s not counting every woman who has dared make a statement online, and then been targeted by offensive memes, called a lesbian, a Social Justice Warrior (SJW) or had a bunch of slurs thrown at her simply for standing for what she believed in.

One of the organisers of the protest for justice for those who have disappeared in Mullaitivu was harassed one day and threatened with death if she didn’t give up the protest and go home.

Women’s rights activists in the East working on MMDA reform are subject to surveillance as well as death and rape threats.

Heads of community-based organisations for women widowed during the war can’t allow their names to run in the media for worry that they, or the women they work with, will become targets of violence from a range of actors.

I understand that these don’t equate in any way with women being degraded through online channels, but what I’m going for is that our society cannot stand to see any woman being ‘out there’ and doing something that they [and sometimes specifically their community] have deemed as not ‘mild’ enough to be becoming on a woman.

It only makes it worse that sometimes women partake in the abuse, on occasion even generating it.

We’re no strangers to the fact that women themselves can be your worst critics. It stings to see women joking about degrading posts made about other women, instead of sticking up and calling the trolls out. We need to acknowledge that strong women are the norm, and not the exception, and hopefully this will stop women tolerating and even enabling harassment. This goes beyond simply telling a woman she has internalised misogyny but also creating the realisation that men will speak the same way about her and her body, should the occasion arise.

Signs around the Lanka Comic Con venue stated that ‘cosplay is not consent’ – just because someone is dressed up in costume doesn’t allow you to poke at their armour or touch their helmets.

There is a breathing, feeling person under the cape or behind the shield, which the meme pages seem to have forgotten. The use of the girls’ photos in the manner as they were, violates the basic decency that should be afforded any human, as cyber-bullying is wont to do.

Resorting to body-shaming and abuse threats when people can’t deal with a strong voice – be they male or female, really – doesn’t reflect very well on them. They’re intimidated and it shows. It shows that they can’t bring themselves to form a good-enough counter-argument. So, they resort to something, anything to tear another person down. With absolutely no thought about the consequences of their actions.

Two of the four girls who were bullied the most – and I say the most because the trolls made offensive memes featuring countless cosplayers from those two days – have opened up about connecting with the characters they portrayed on something deeper than preference. They spoke about anxiety and insecurities, about battling depression and about their personal struggles. The costumes were their way of gaining some control over their lives when they felt themselves falling. An affirmation to themselves, more than any audience, that all strength was not lost. For this, they were in equal parts praised and punished.

Any woman who stands out from the patriarchal mould is often met with backlash. The single mother, the businesswoman in a ‘man’s world’, the female politician, the woman who gives her catcallers the middle finger, any outspoken liberal woman. Backlash from the men who created the system and the women who are deeply trapped in that same system, occasionally without even realising it.

A commenter on the original version of this post said, very rightly, ‘Their biggest fear of all is the woman they can’t shout down. A woman who achieves anything through striving, intelligence and compassion. A woman who is happy with who she is terrifies them.’

To the women themselves, I can’t say how much I respect you. I have zero body confidence to unapologetically don a fabulous costume. I have too much anxiety to confront people sometimes. I don’t have the impact that you do in the amazing work you do on the ground. The idea of what people subject your confidence to therefore riles me up to no extent.

You’ve probably heard these words a million times – you’re much bigger than their hate. The grace with which most of you handle the absolute garbage people rain on you makes me believe in superheroes. And I can only hope that the words of small-minded people don’t ever deter you from being the amazing people that you are.

This was written in the immediate aftermath of the spate of online harassment that cosplayers at this year’s Lanka Comic Con were subject to. Through it all, the young women have carried themselves with exemplary grace. In the days since, comic book authors of the DC Universe, the director of the recent Wonder Woman movie and actress Gal Gadot, who portrayed the title character have reached out to congratulate the young girls on their portrayals, that were ridiculed by several Sinhala-language meme pages.

You're the real thing. Out there representing with honor and a great spirit. A real amazon. You made us all proud. Thank you ! @GalGadot https://t.co/61oSbwv4xg

While that attention is heartening, more so for dedicated fans of the stories as the cosplayers were, we must be aware that harassment online does not end here. The recurring issue faced by the throng that rose to mass-report these offending pages was that Facebook did not seem to deem posts with sexist, degrading comments as violating their Community Standards. This reinforces the need to push for vernacular language capacity in Facebook’s Support system. It is an unfortunate reality that for every page suspended, another one pops up. This highlights the need for policy or legislation that will allow victims of cyberbullying to take action against those harassing them, and to ensure that those who are responsible can’t continue to hide behind a veil of online anonymity.