Mild trepidation accompanied me to the Punchi Theatre the other night (29th July). A jaded palate with too much memory of stale theatrical tropes – the growing longing for the escape hatch of the interval, a hasty exit, the acerbic comfort of a gin and tonic had become the staple of my theatrical experience. Besides, I wondered, was not the Theatre of the Absurd yesteryear’s flavour, dated, self conscious posturing, a quaint dramatic byway, at odds with the ultra HD of our times. Happily I could not have been more wrong.

The production did itself a huge favour through a superlative script. An expansive and self assured translation, pithy and succinct, equally comfortable with the bizarre verbal gymnastics of Absurd theatre as well as the intellectual tradition that gave rise to it – all transposed with clarity into the banalities of upper middle-class Kandyan domesticity. It made for the hollow mirth at the heart of the Absurdist project. One suspects or hopes the literary value of the Kanchuka Dharmasiri and Lohan Gunweera translation will far outlive the production. The plot itself is wafer thin – follows the events of an evening as the meeting of two couples for dinner is interrupted by a visit of the Fire chief who then regales them with non-sequiturs.

The stage was dominated by a melting clock reminiscent of Dali’s Persistence of Memory. Repetitious chimes of the clock form central aural backdrop throughout the play. The cynic might have found the trope clichéd. But then the Melting Clock Theatre Company obviously finds great meaning in the icon. More interesting was the artful arrangement of potatoes on each of the 3 boxes that formed the core of the set. It was the first intimation of the leit-motif of the production – what has form, structure and content can also be entirely devoid of meaning.

Absurdists subverted the linearity of time, cause and effect and the tenuous certainty of reality. They were the unwitting poets of the quantum state that serendipitously stumbled on truths that theoretical physicists had toyed with twenty years earlier. Like Schrodinger’s Cat, the ringing of the doorbell many or may not yield a visitor at the door. The silly Alice-in-Wonderland subversions and inversions of logic are laced with the menace of random, amoral multiverse, devoid of pity or reason. The schema of that multiverse is not grand and awe striking, but small, dull banal and ordinary.

Theatrical translocation of a European play into a Sri Lankan context is a fraught thing even with a traditional play – with an absurd play the margin of error is miniscule. Indeed some members of the audience were stoic in their refusal to respond. Here the director Kanchuka Dharmasiri’s triumph is perhaps in locating the play within our own social absurdities as a bridge of plausibility. She takes the Sinhala middles class affectation of embracing self- effacing social awkwardness as a form of refined social grace and carries it to its bizarre extreme. Thus the Silva’s and Perera’s social small talk takes place amidst exquisite contortions of mutual embarrassment.

Dharmasiri handled her players with adept control, layering multiple styles of acting. At one level they flirted with the exaggerated almost Nadagam style helped by the disconcerting bulbous bright red lipstick. That layer drops to a dull robotic monotone for the exchange of logical positions. A third layer of arch comedy replete with the stock in trade slapstick that augments a fourth layer of finely understated playing from the heart.

Good actors love absurd theatre because they have one less lie to play – that of being real – and freedom that ensues allows actors to follow the unrestrained logic of their characters. The cast of Thatta Gaikawa delivered a superb and consistent performance, their devotion to their characters palpable. However two roles do warrant a particular mention. Dhanushka Gunetillake played the character of the Fire chief with understated mania and delightful aplomb. It is a role that offers the actor plenty of room to lapse into Scylla of overacting or the Charybdis of play to the audience. Resisting both temptations Gunetillake maintained fine control and steady commitment to the lunacy of his logic. Sameera Hewage who played Mr. Martin (or Perera in this production) had the harder, less glamorous role which he played with inconspicuous unselfishness reaching points of poignant sincerity.

The longevity of the Bald Soprano has much to do with what Ionesco achieved in the play. As the as world of the illogical banalities and non-sequiturs pile on each other, language gradually loses its meaning and descends into sound and chaos. Again the translation uses polyphony and alliteration of the language to amplify the breakdown and Dharmasiri was skilful in harnessing the disintegration of language into noise to drive the avowedly plotless action into a climax of ‘sound and fury signifying nothing’.

The Melting Theatre Company is a remarkably talented, exciting and clever group and the next stage of their evolution beckons. Were they cricketers they would be feted and nurtured. Given the aesthetic sensibility deficit in our culture recognition will be elusive. This review hopes in some small measure to remedy that. 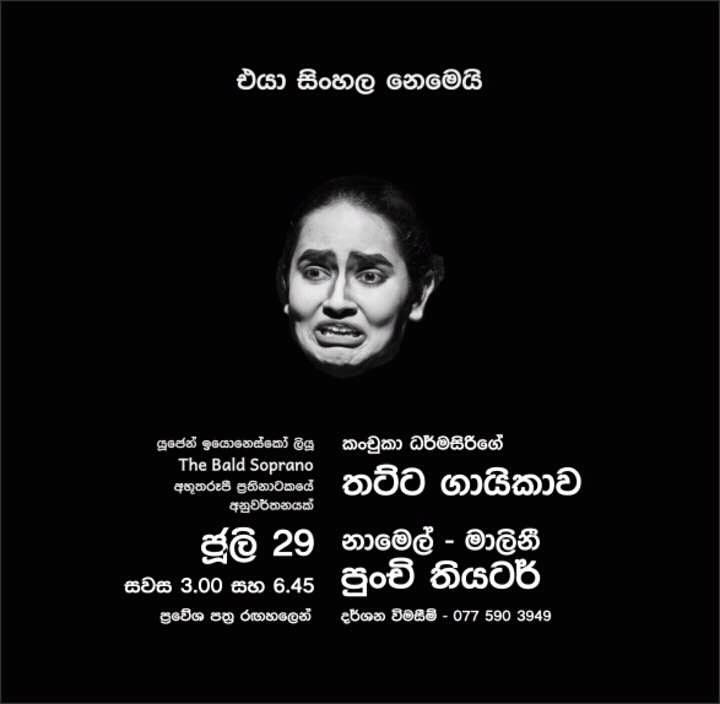