A story of saints, slaves, moneylenders and mercenaries at the heart of Colombo

Branching from a walking tour of Slave Island conducted at Colomboscope 2015, the following article is a collection of ideas and stories shared over the festival backed by a personal interest and research in mosque spaces in the South West of Sri Lanka.

Once an island within a port city, the Slave Island of Colombo is known by the alternate names of Kompanna Veediya (Company Street) and Kartel. The island was given this name during the Dutch colonial administration as a marker of segregation of slave residence. It was the largest island from a series of land masses connected via ferry to the south of the Fort of Colombo. Slave Island remains a multicultural space.

Kartel is a traditional Malay name for the area of Slave Island. As its name suggests was an urban island space into which the slaves of African origin captured by the Dutch VOC were rowed into daily to be housed after their daily activities in the Fort in Colombo colonial Ceylon. Slave Island also known as Kompanna Veediya was a central point for trade and Company activity. The name of Slave Island was passed from the Dutch colonial administration to the British colonizers and with time from railway and postal identification- the name continues   despite the abolition of slavery in 1845.

Erected during the British colonial administration the Kompanna Veediya railway station was constructed to the design of the Liverpool-Manchester railway line in Britain. The station in the city of Colombo was surrounded by a lake ferry service. The key reason behind trade hubs setting base around this area was owing to the ferry proximity from their companies to the harbour. Being an island, the harbours were the vital sea links to global trade networks which connected Srilankan tea export markets to the rest of the world. To date, the streets of old ferry lane and  new ferry lane hark back to a time when Slave Island was connected three quarters through a ferry service. Such an industrial hub would not simply commission slaves and their masters. The oppurtunity for Indian Ocean trade attracted businessman, merchants, moneylenders and traders from across the world and with it enabling a space for social, cultural, commercial and personal interactions.

This article will explore three of the oldest mosques within the Kartel (Slave Island) area which is located south of the Colombo Fort. The construction of mosques serve as one of multiple markers of Muslim community identity and the demographic evolution of the religion of Islam. Wherever it may be situated, the aim of a mosque is not to sit isolated but integrate into the sociological and urban landscape. Apart from its distinct symbols of minarets and certain colours used in mosque spaces, they do for the most part accommodate wider architectural influences of the cities they are built in.

Of the many worlds seeped in history between the Kompanna Veediya railway tracks and Vauxhall Street the story of the mosques built by the Malay and South Indian mercenaries and merchants capture the story of multiple evolving community identities.

Slave Island is an example of mixed Muslim heritage in the heart of the city. Java Lane, Malay Street and Moor Street are markers of this co-existence within a trading hub. Proximately these mosques are located close to Churches and Kovils still patronised by locals. Of the ten mosques located within Slave Island, also knit in the Federation of Kompanna Veediya Mosques are three mosques which surpass the mark of a hundred years since establishment.  The Antiquities Ordinance of 1940 maintained by the Department of the Archaeology of Sri Lanka legally protects buildings in urban areas from being struck down for urban re-planning. Thus, these mosques just like the Churches and Kovils that surround them are protected by this law from demolition in the face of urban redevelopment.

True to the reality of such a legal Act, on number one Java Lane stands the Malay Military Mosque also known as the Java Lane Mosque. Within all surrounding tenement houses attached to the mosque being struck down this mosque stands alone on a narrow path leading to it. The Malay Military Mosque founded in 1864 erected its present structure in 1921. A testimony to the existence of mercenary soldier trade from Java to the rest of the world over the First World War. The Malay race came to Sri Lanka mainly in two groups – one as soldiers to serve the Dutch and those who came later as Indonesian political exiles or `Staatsbannelingen’. The Java mosque is famously known as the “Rupee Fund Mosque” as each mercenary soldier based in the area (of Java descent) contributed a rupee to the establishment of a mosque in the area. It is known as the Malay military mosque instead of Java military mosque as the Malay language served as the lingua franca for military personnel from South East Asia who was located in Slave Island either in mercenary or police positions. 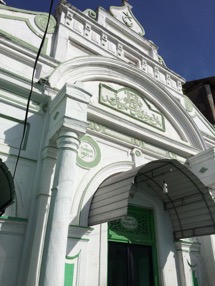 A second mosque preceding the Military Mosque in its establishment is the Wekanda Jummah Mosque. At the Slave Island junction formerly named Saunders Court Road where six roads meet stands this grand mosque and shrine of the Patron Saint of Slave Island Hussein Bee Bee Rali.  The land on which the mosque was built was purchased in 1786 by Pandan Bali, a Javanese nobleman who had been exiled to Ceylon.  The story as narrated by the caretaker of the mosque premises and pamphlets for the annual flag hoisting ceremony for the patron saint reads as follows. Hussein Bee Bee Rali was a lady of Pathan origin who was buried in Slave Island, amid clearance of the present mosque space her tombstone was discovered among others. Miracles as narrated by locals of the area over time established that Hussein Bee Bee Rali was a healer to the ill and afflicted and in fact the patron saint of the area. To date, crowds gather every Monday and Thursday evening to pray for and seek intercession in their prayers by Her Holiness Bee Bee Rali. It was around her tomb that the Wekanda Mosque was established in 1875 by the Sabu Latiff family of Malay origin. The trusteeship of the mosque is still in the hands of the Latif family with the head priests of the mosque also being of generational familial descent.  Despite the Malay descent of the Sabu Latiff family it is notable that the shrine of a Lady Saint (Awliya) is maintained and revered by mosque trustees and locals alike. The architecture of the mosque space preserves its original form with modern extensions to accommodate the crowds that gather for Friday Jummah prayers and daily prayers. 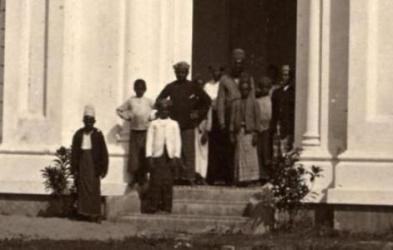 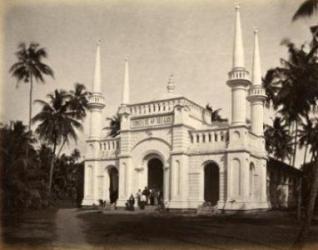 With a photographic history dating back to 1880, Charles Scrawley an Agent of the Empire placed Masjithul Akbar on the map of Ceylon. Located on Kew Road in Slave Island, the mosque stands across the Ridwaniyyah Arabic College. These markers of Muslim language and religion stand adjoining the Pilgrims Kovil also known as Kathiresan Kovil of Slave Island. Having being constructed within a similar timeframe the Akbar Masjid and Kathresan Kovil were built in 1859 and 1870 respectively. Locals of Slave Island narrate that the mosque is remembered to have been surrounded by lake during its establishment. As told by a sixth generation trustee of the Akbar Mosque, the origins of the founders of the Akbar Mosque trace back to the story of a South Indian horse merchant by the name of Talep Akbar who resided in Slave Island. By collecting money from Muslim locals the Akbar Masjid was built of sandstone and sand.

Apart from its religious history, an interesting feature Kew Road of Slave island (as noted at the Colomboscope tour) is that it was on this road that the botanical specimens began to be collected which inspired the Kew Gardens in Britain.

Of the disappeared communities of old Kartel are the Kabul Bhais of Pathan origin from Afghanistan and Pakistan. This community whose primary occupation was money lending was specialised in lending to the labouring class in companies of Slave Island and tea estate labour in the hills. Located near Java Lane of Slave Island, this community was notorious for its ruthless manner of debt collection and are described in oral history accounts as riding fast motorbikes and wearing staves for protection. However, with the Sri Lanka Money Lending Ordinance enacted in 1918 non-citizens of Sri Lanka were prevented from continuing money lending activity thus leaving the Kabul moneylenders no choice but to leave Sri Lanka for their homeland- or greener pastures. The Kabul Bhais would stand out in unique turbans and waistcoats

The threads of multiple historical narratives running through Slave Island makes it a unique space in Colombo’s urban historical identity.

Ramadan with a Ban: Face Masks On, Niqabs Off

The VIGED, the Vulnerable and the Wise: Thoughts on the Birth of Jesus for Our Times

The Paradox of Tolerance

The Void in the Nation’s Heart