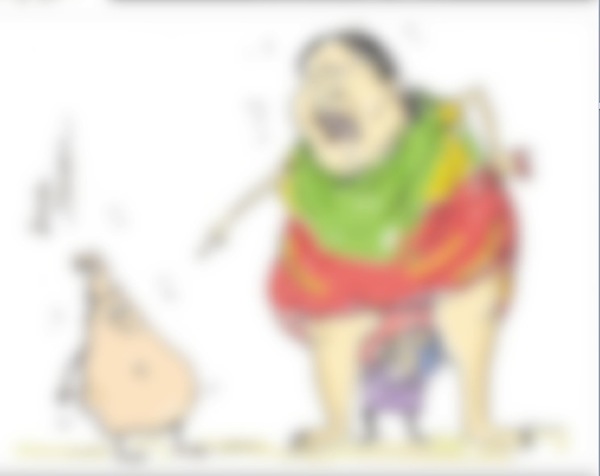 Updated, 16 September, 6.30pm: It was brought to the attention of Groundviews some hours ago that despite what Mr. Jayasuriya notes below (coupled with the fact that as we flag at the end of this article, the cartoon had been deleted less than a day after it was published from the online version of the newspaper), the newspaper ran this apology in today’s edition, The LAKBIMAnEWS cartoon on Sunday seemed to have ruffled some feathers. Going by the tweets that were critical of the cartoon, I noticed some card-carrying activists of the anti- Sri Lankan lobby, who may have mistaken LAKBIMAnEWS for one of the Sri Lankan government mouthpieces – which LAKBIMAnEWS is not – and decided to make avail of this opportunity to go for another round of Sri Lanka bashing. That is a sad miscalculation on their part, and they would have known better, if they had happened to go through the editorial content of LAKBIMAnEWS.

To begin with, the cartoon by my colleague Hasantha Wijenayake should be treated as a matter of artistic expression. Cartoons can, sometimes, be provocative, irritating and even outrageous in the way they lampoon the powers that be. Our cartoon depicts the Indian political dynamics vis-à-vis  Sri Lanka, as viewed by our cartoonist. A cartoon could hardly cover the full range of the story. Our cartoon, in my opinion, did not cover the full scope of the Indian foreign approach towards Sri Lanka as per the Tamil question. But it covered a part of it, i.e. Tamil Nadu’s increasing belligerence towards Sri Lanka and a prime minister who appeared to be lost in this power dynamic.

Is our cartoon vulgar?  I would say, vulgarity, like beauty lies in the eyes of the beholder. While puritans would now be calling for our blood, for the subtle sexual connotation in the cartoon, my position was that it should not be a reason for censorship. Art should not be viewed through puritanical lenses and I do not believe that I, as the acting editor of LAKBIMAnEWS, a post I agreed to hold only until the management finds a replacement, should replicate the censor board of Sri Lanka’s film cooperation. It is a well thought out decision on my part to publish the cartoon and I stand by it.

Going by some of the initial reactions to the cartoon, I suspect that some egos might have been challenged, but our Indian colleagues should understand that Sri Lankans are also entitled to express themselves, even though sometimes such expressions could be mildly irritating, as our cartoon happened to be. A good dose of tolerance is a prerequisite for any healthy society and I have always believed that India with its flourishing free press, institutional democracy and newfound self confidence can be a beacon of hope for us in this part of world, which has recently witnessed a fresh wave of intolerance and extremism.

LAKBIMAnEWS has never been an Indian basher. Our editorial on Sunday stated that any attempt to reproach New Delhi for the rising pro-Eelam activism in South India was both flawed and counter-productive. We went further to suggest that Sri Lanka seemed to have learnt from its previous mistakes vis-à-vis  the handling of its much larger neighbour, describing it as perhaps the greatest foreign policy lesson as far as Colombo is concerned in recent times.  But sadly the reaction to the cartoon smacks of the big brother attitude that dominated Indo-Sri Lanka relations in the mid 80s.  That is the most disturbing part for me in this whole episode.

PS: Indian  political cartoonist Aseem Trivedi  was today (10) arrested and jailed on sedition charges for his drawings that mock the government and politicians. Perhaps, the outrage at our cartoon is symptomatic of a greater wave of intolerance to criticism.

#The lakbima cartoon is a matter of artistic expression and therefore of freedom of expression. #lakbimacartoon

A dose of tolerance is mandatory for any healthy society #lakbimacartoon

However, as of 1600hrs on Monday, the cartoon was no longer accessible on the newspaper’s website. Where the cartoon was, there is now a large white space. Ranga’s been asked to explain why this is the case if the paper and he stand by the cartoon, and we’ll publish his response as an update to this article no sooner than we receive it.]