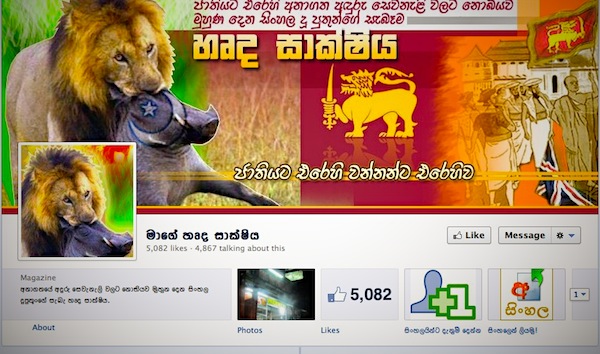 A lion carries a dead wild boar in his mouth. He is walking through the grasslands, victorious after the hunt. On the dead boar is a crudely imprinted crescent moon and star.  This is an image found in a Sinhala Facebook page (https://www.facebook.com/pages/මාගේ-හෘද-සාක්ෂිය/351343628228268) that among other things compares Sri Lankan Muslims to wild boar, puppies (the Sinhala wording is cruder) and crows. The Facebook page has more than 5,000 likes and increases daily. It is only one of many that stalks cyberspace. This is Sri Lanka in 2012!

We are recovering from 26 years of war but it seems like some of the citizens of this country want to be at perpetual war. The latest fracas is the ‘Dambulla incident’  where a mob led by Buddhist monks of the area are agitating for what they call an illegal structure masquerading as a mosque to be torn down as it contaminates the sacred Buddhist area of the Dambulla temple. It is news to me that other places of religious worship can be considered as less sacred or contamination to a sacred area. But such is their complaint. Soon after this incident was made public, I had a conversation on the topic with a good and close friend of mine who is Buddhist. She is a decent woman, a devout woman. She is charitable and generous and kind but, and here is the surprise: she sees nothing wrong with the incidents of violence involving Buddhist monks. Regrettably she is not alone. Much as we would like to think that those who perpetrate Buddhist chauvinism are in the minority, it is not so. Increasingly, I see Buddhists who believe and engage in violence and un-Buddhistic behavior, trumpeting their achievement as champions of Buddhism.

Let us start with our constitution. I have often wondered how a country can claim to be Buddhist. In my mind it is technically impossible to apply Buddhist values  and survive as a nation in the world as it is. It would be an ideal world indeed to look forward to the time when all countries will be able to say they implement the values of Buddhism and the world will be a much better place for it. But for now, in todays time and place a country may need an army, may  need to engage in battle if  required to do so – both instances that we have experienced. But isn’t that against true Buddhist principles? Then I have wondered how Buddhist monks  who have been charged with drug possession, sexual misconduct, rape, treasure hunting, temple pillaging, murder, violence… the list of offences goes on and on which in itself is astounding,  continue to wear the robes, manage temples and call themselves Buddhist monks. Is there no authority that can expel disgraceful Buddhist monks? In addition, I am astonished that citizens who call themselves Buddhist, who are devout, pray, meditate and do pooja, attend sil, listen to bana and pirith, continue to condone  violence in the name of Buddhism by agreement or staying silent. I just don’t understand.

In my mind, Buddhism is one of the supreme non-violent movements of the world. The Four Noble Truths, the Eightfold Path (right vision, right emotion, right speech, right action, right livelihood, right effort, right awareness, and right meditation) the Five Precepts (do not kill, do not steal, do not engage in false speech, do not engage in sexual misconduct, do not take intoxicants) and the Threefold Way (ethics, meditation, wisdom) are meant to be applied in daily life. How is this in any way possible or compatible with the violence and injustice committed in the name of Buddhism? Bernard Faure, Professor of Religious Studies of the University of Stanford, has this to say:

Murder, on the other hand, is clearly condemned. As the Buddha states in the Brahma Net Sutra: “If a child of Buddha himself kills, or goads someone else to kill, or provides with or suggests means for killing, or praises the act of killing or, on seeing someone commit the act, expresses approval for what that person has done, or kills by way of incantations, or is the cause, occasion, means, or instrument of the act of inducing a death, he will be shut out of the community.”

Which brings me to the question: What are the Chief Prelates of all the Nikayas doing? What is the state doing? If silence is acquiescence, then it appears that the powers that be – both religious and state, endorse the violence, the persecuting of minority communities and sending them the clear message of being second class citizens.

But let us go back to Dambulla. In  disputed cases there are legal avenues to pursue  to rectify the situation. If the mosque is illegal and needs to be demolished, there is a legal mechanism in place that will achieve it. Why the need for violence? For the destruction? For the barbaric and shocking behavior of both monks and men?

War is not unknown in the Buddhist world. In history, there has been what is termed  ‘Buddhist wars’ especially in China, Tibet and Japan. Most of them were begun as a cleansing process to rid threats to its very existence and fought in the name of liberation. Yet, of all the great religions and ideologies Buddhism remains the most pacific – a trait that is increasingly rare in the violent world of today. There are a number of verses from the Buddha’s sermons that support this:

In times of war
give rise in yourself to the mind of compassion,
Helping living beings,
abandon the will to fight. Kutadanta Sutta, (Digha Nikaya V)

Even if thieves carve you limb from limb with a double-handed saw, if you make your mind hostile you are not following my teaching. Kamcupamasutta, Majjhima-Nikkaya 1 – 28-29

I am not a Buddhist, but I appreciate the Buddhist ethos. And I wonder: if the behavior of violent Buddhism is puzzling to me, why isn’t it to you? One of the advantages Sri Lanka has is its multi-religious, multi-ethnic population. It is proof that for thousands of years the people of this country, whatever their religion and beliefs, have been open and welcoming , even embracing different cultures and people. It has made our country vibrant, rich in traditions and a truly wonderful place to live in. So we should be concerned when some elements in our modern history want to change that feature. In fact I have noticed intolerance apparent in all our communities not only the Sinhala Buddhist community. Perhaps it is a reflection of the times we live in but this is something we need to avoid. And if it happens we have to speak out.

I leave you with a favourite modern story that to me  embodies the quintessence of Buddhism:

A Vietnam veteran was baffled by Vietnamese Buddhist monk, Thich Nhat Hanh’s unswerving dedication to non-violence. The veteran in an attempt to question the monk, asked him if someone wiped out all the Buddhists in the world and if the monk was the last one left would he not try to kill the person who was trying to kill him and in doing so save Buddhism. Thicht Nhat Hanh answered: It would be better to let him kill me. If there is any truth to Buddhism and the Dharma it will not disappear from the face of the earth, but will reappear when seekers of truth are ready to rediscover it. In killing I would be betraying and abandoning the very teachings I would be seeking to preserve. So it would be better to let him kill me and remain true to the spirit of the Dharma.