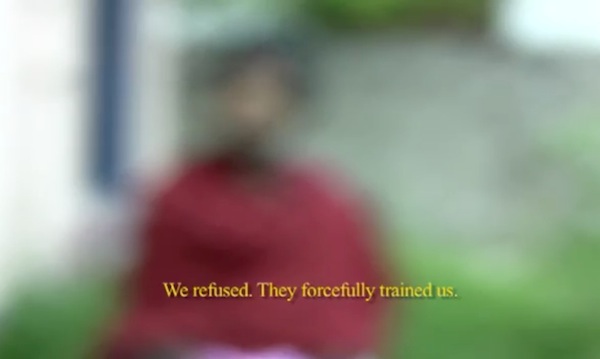 [Editors note, 27th February 2012: It was brought to our attention by Valkyrie, a contributor to this site, that significant portions of this article have been plagiarised. A detailed account of this can be read at Doing the wrong thing for the right reasons: Plagiarism and the fate of LTTE surrendees. The issues noted in the video, and in general about the fate of women and former LTTE combatants, remain valid.]

With the defeat of the LTTE, many female combatants and women who – willingly or unwillingly – worked with the LTTE surrendered to the Sri Lankan military. Initially, it was extremely difficult to get their details. However, in the last few months, the Government has released many “ex-combatants” after “rehabilitation.” Their reintegration back into the community has become a critical concern for women’s groups in the north. Many ‘surrendees’, as they are called, were not combatants but those who worked within the LTTE’s administration, while others were forcibly recruited even hours before the end of the war. Moreover, during their internment at rehabilitation centres, they were unable to exercise their right to due process in order clear any charges against them.

Even after their release, these “rehabilitated” surrendees are asked to register with the Civil Affairs Office (within the military). Following the process of registration, they have to report regularly to the military and their movements are closely monitored. As a result, the female ex-LTTE members are at great risk and one of the most vulnerable groups in new resettlement areas. The situation is compounded by the identification of these female ex-combatants to the community as people who pose a potential threat – not necessarily due to their previous perceived or actual involvement with the LTTE, but because they are constantly monitored and their movements restricted by the security forces. The communities of the north at times tend to avoid association with ex-combatants in the fear that the attention of the security forces might be drawn towards them, and ‘if something happens,’ the security forces might first seek the person who was released from the ‘rehabilitation’ centre and then those who might be associated with them.

The biggest challenge they face after returning home is the lack of employment and education, which impacts on their ability to live a normal life. Marriage prospects for female ex-combatants who fought with the Liberation Tigers of Tamil Eelam (LTTE) are bleak within Tamil society, which is very traditional. The estimated number of female ex-combatants is over 3000. A common complaint from rehabilitated ex-combatants is that they are not being hired for jobs because they are seen as “unusual” women due to their association with the LTTE. In reality, many of these ex-combatants are not demanding a lot. All they want is a decent life and to be able to forget about everything that happened in the past. Many fear that the attribution of the label “Tamil Tiger” to them is going to stick around forever irrespective of the fact that they need to move on. They are worried that the cultural setting will keep them in isolation and their own community will continue to distrust them for something that they are not.

Two years after the end of war, female ex-combatants are still collectively struggling to seek social acceptance from a community that in the past celebrated their role as “brave mothers and sisters” when they fought on the battlefield.