16 March 2011, Colombo, Sri Lanka: A press conference was held in Colombo earlier today to launch the latest fixture on Sri Lanka’s ever busier festival calendar. Organisers of The Boycott Festival issued a brief statement and then invited the press to enjoy the refreshments in the ballroom.

The Boycott Festival will take place over five days, beginning today and ending after a lunch banquet on Sunday. A full list of objections may be obtained by emailing [email protected] In their statement the festival organisers said they were angry and upset with what has taken place and continues to take place in our country. They admitted that worn down by the last six – and also the last thirty – years, they could no longer muster enthusiasm for anything and would really prefer not to. They were tired, they said, and couldn’t face the journey to the festival site. They would not be attending.

Director Karthika Peiris said ‘As ever, we send our best wishes for the failure of this effort’. 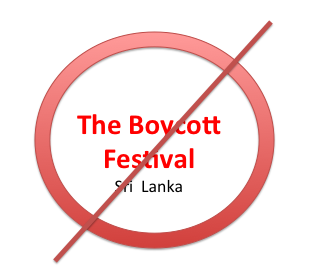 Meanwhile, protests against the festival began months ago and have grown to such proportions that there isn’t a hotel room now to be found in the festival city. Local business is booming, airlines are reporting record passenger numbers and the Government has issued a statement celebrating The Boycott Festival as a key success of its VindicateSriLanka2011 campaign. A group in Paris has today issued a list of celebrated thinkers who have never been to Sri Lanka and do not intend to visit.

Our reporters spoke to several Sri Lankans not attending the Festival:

In an extended interview with Banyan News, Director Karthika Peiris laid out her vision for The Boycott Festival. She said it was a sum of many parts and a real team effort. Begun with a great measure of good faith it subsequently entered into a strong partnership with grief. Ms. Peiris spoke movingly of the way people had suffered in Sri Lanka and her desire to respond to these indignities. She said that although it could not do nearly enough, The Boycott Festival had at least given her a platform for promoting the values of bitterness, disbelief and despondency. She continues to work tirelessly for this cause which she hopes will ultimately achieve peace in Sri Lanka.