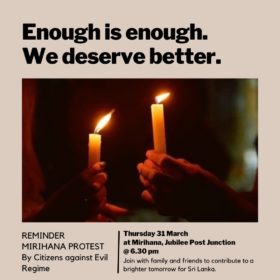 The Protest
Events of March 31 leading into the early hours of April 1, 2022

On March 31, a silent citizens protest that began at Jubilee Junction in Nugegoda burgeoned into a massive show of dissent against President Gotabaya Rajapaksa and government and their handling of the prevailing economic crisis in the country. Sri Lanka has been facing shortages in diesel, gas, petrol, paper and medicine. At around 8 pm, with a large crowd building and more people joining the protest, the protestors made their way from the Jubilee Junction past the Mirihana roundabout and down Old Kottawa Road towards the Pangiriwatte Road where President Rajapaksa’s private residence is.

Initially protesters faced off with police who had barricaded the entrance to Pangiriwatte Road. They covered the entirety of the Old Kottawa Road and brought traffic in the area to a standstill blocking the 119 Nugegoda-Maharagama bus routes. These events were broadcast live. The initial protest in Jubilee Post (the first one in the location)  also marked 31 days of continuous citizens protests at the Kohuwala Junction that began on March 1. At around 10 pm the crowd managed to dislodge one of the barricades blocking the entrance into and moved further into Pangiriwatte Road where they were pushed back by riot police.

A large group of protestors later dispersed and then occupied the Mirihana Junction where a larger crowd began to build up. The Old Kottawa Road was meanwhile reinforced continuously by more police and the armed forces. Electricity to the Mirihana area was disrupted, marking the first power cut in the area since the crisis began. Protesters after re-mobilizing at the junction and with a larger crowd building, once again moved towards Old Kottawa Road en masse at around 11.15 pm.

It was here that scuffles re-erupted and the police, now reinforced by the STF, the Army and the Navy pushed the protesters back with more force. An army bus was set alight with multiple witnesses claiming foul play and alleging the act was done by an outside to escalate and intensify the situation and provide a reason for more force to be used. Click here to view in higher resolution.

Tear gas and water cannons were turned back on in an attempt to push the protesters towards the Mirihana roundabout junction. Marianne David, Deputy Editor at the Sunday Morning, reported gunshots, but it was unclear if this was live ammunition or rubber bullets. A video circulating appears to show a protester being taken to hospital after suffering an apparent gunshot wound.

The escalating situation was taken over by the Army and the STF who hunted down and assaulted a number of the protesters including (according to multiple eyewitnesses) residents of the area who had watched the protest unfolding. An eyewitness claimed, that tear gas was not fired into the crowd to make the crowd disperse but instead fired behind them so that any path of escape was effectively blocked. It was then that the police charged and began their assault. The STF and riot police entered the homes of several citizens and were seen beating them up. These claims have been corroborated on numerous CCTV camera feeds and mobile phone recordings. The police advanced and assaulted citizens as far down as Attanayake Mawatha, 1 kilometer away from Pangiriwatte Mawatha where the initial protest had taken place and 250 meters away from the Mirihana Junction.

In a separate protest, the Kandy-Colombo Road was blocked off by protesters burning a log and other items across the road, stalling traffic at Dalugama, Kelaniya.

No government statement was made during the night. It was further unclear if the President was at his residence.

Thirty seven people were injured during the protest in Mirihana and are being treated at the Colombo National Hospital. Among the injured are 24 members of the STF, three policemen and three journalists. Multiple reports seem to indicate that journalists were intentionally targeted by the armed forces. In all seven journalists were assaulted. Those apprehended during the protests claim to have been beaten and tortured while in custody.

Those who were arrested during Thursday night (31) protest near #SriLanka President @GotabayaR‘s residence in #Mirihana say: “We were severely beaten up by STF & Army. The police had to warn them to stop beating us as they were afraid they would be held responsible.” pic.twitter.com/rNSTb2ls3I

Several vehicles including an army bus, jeep, three-wheeler and two traffic motorcycles were set on fire according to Police Spokesman SSP Nihal Thalduwa.

The President’s Media Division said that an organized group of extremists were among those who were protesting at Jubilee Post, Nugegoda. The statement noted that the group acted in an unruly manner and, armed with iron clubs, machetes, and sticks, had provoked the protesters and marched towards the President’s residence in Mirihana.

During a media briefing, Ministers Keheliya Rambukwella and Dilum Amunugama said the word ‘extremist‘ was used to imply the presence of ‘political extremists’ at the protest. Mr. Amunugama later went on to state that he believes the word ‘extremist’ has to be replaced by the word ‘terrorist’.

Over 300 lawyers appeared at the Mirihana Police to represent those who were arrested and offered their services free of charge.

Protesters in Nuwara Eliya stopped the opening ceremony of the Nuwara Eliya Spring Festival, demanding the festival be stopped because of the worsening economic situation. Shiranthi Rajapaksa, wife of the Prime Minister, was supposed to be in attendance at the event.

In Moratuwa, stones were hurled at the residence of Mayor Samanlal Fernando and police were called to control the situation. Carpenters, fishermen and businessmen protested at the Moratuwa Junction obstructing Galle Road traffic, saying they had been severely affected by the power cuts, gas and fuel crisis. Police and riot squads were called to the scene.

A protest by fisherman in the Galle Town obstructed the Matara-Colombo main road.

The Public Utilities Commission of Sri Lanka filed a fundamental rights petition before the Supreme Court seeking an order against the Ministries of Power and Energy to release fuel stocks to provide uninterrupted electricity.

Police Media Spokesperson Senior DIG Ajith Rohana said the investigation into the Mirihana riots had been handed over to the Colombo Crimes Division, the Criminal Investigations Division and the Western Province North Crimes Division. He said an additional investigation was being carried out about reports of assaulting journalists. Rear Admiral (Retd) Dr. Sarath Weerasekara, the minister of Public Security, while speaking to News1st said investigations would determine if ‘unruly acts were commited by a group of extremists’ and if they involved ‘religious extremism or terrorism’.

Resident Coordinator of the UN in Sri Lanka, Hanaa Singer, said the UN was monitoring the developments in Sri Lanka and was concerned by reports of violence. She called for restraint from all groups. Amnesty International’s South Asia Director, Yamini Mishra, called for the state to ‘refrain from using force to create fear and stifle dissent.’

Police curfew was imposed within the Western Province from midnight to 6 am on April 2.

Forty eight out of 56 people were released on bail by the Nugegoda Magistrate’s Court. Six were detained to be produced for an identification parade.

President Gotabaya Rajapaksa issued a Gazette Extraordinary declaring Public Emergency in Sri Lanka with effect from April 1. The Public Security Ordinance (PSO) describes an emergency as a clear situation of exceptional threat, danger or disaster where the government can be given powers not permitted during normal times to deal with the threat. A situation like this allows the President to proclaim a state of emergency in order to ensure national security, public order and maintain essential services.

The Sri Lanka Freedom Party decided to call for a caretaker government. State Minister Dayasiri Jayasekara said that members of the party would be stepping down from their ministerial positions if the government failed to take necessary actions.

Youth activist Anurudda Bandara who was apprehended by the officials identifying themselves as the Modara Police has been charged under section 120 of Penal Code, which makes it an offence to excite or attempt to excite feelings of disaffection to the State. Anuradda is the Facebook admin of the page ‘Gota Go Home’. He was apprehended due to a Facebook that offended the president. The activist was initially meant to be produced at Hulftsdorp at 4:30, yet after numerous delays with no clarity offered to at least 50 members of the legal fraternity that voluntarily appeared on behalf of Anuradda, he was finally produced before courts at 12:55 am.

He was granted personal bail thereafter.

Meanwhile a total of 23 who were arrested following the protest in the Mirihana on the 31st were remanded until the 4th.

An Island wide curfew lasting from 6pm (2nd April) – 6am (4th April) was proclaimed through an extraordinary gazzette. It provided a two hour grace period between when it was issued and imposed, and prohibited anyone from being on any public road, park, recreation or other grounds, railways, seashore without written approval from the Secretaries of Defence or Public Security Ministries, IGP or authorised officers.

Protests continued on the 2nd of April including one of notable size and presence at Green Path, in Colombo. Protests were also held in Moratuwa by the Moratuwa Students’ Union, and by Law students of the Sri Lanka Law College. A protest in Homagama was allowed to extend beyond the allocated curfew hours by the Homagama Police. It was met by loud cheers of support by the gathered crowd.

Videos of Armoured Personnel Carriers roaming the streets of Borella and other sububs of Colombo were shared widely.

Shortly after midnight, access to social media sites, Twitter, Facebook, YouTube, TikTok, Telegram and other platforms appeared to be blocked in Sri Lanka.  Netblocks, an independent global internet monitor confirmed the restriction of multiple social media platforms. The Chairperson of the Information and Communication Technology Agency Oshada Senanayake stepped down from his position shortly thereafter. To read a short statement by him click here.

Minister Namal Rajapaksa, the Minister of Youth and Technology tweeted that the blocking of social media was completely useless, and urged authorities to re-consider the decision.

Following a day full of protests in Colombo, its suburbs and another major protest by students in Kandy at the University of Peradeniya, it was reported that a the entire cabinet of ministers tended their resignation to the Prime Minister following a cabinet meeting. Previous reports indicating Prime Minister Mahinda Rajapaksa tending his report turned out to be false. Minister Dinesh Gunawardena was claimed the decision “paves the way for President Gotabaya to form a fresh Cabinet, amid demands from coalition partners for a “caretaker government”.  The decision if true, would end up leaving two both Rajapaksa’s in charge of the country’s executive powers. Furthermore, as per Article 47(2)(b) of the Constitution, for Cabinet Ministers to resign, their resignation in writing must be submitted to the President, and not the Prime Minister, thus leaving the decision with no legal effect.

For Cabinet Ministers to resign, they should submit their resignation in writing to the President, not the Prime Minister. Art 47(2)(b) explicitly states this.

If this report is true, then technically, the Cabinet Ministers have not properly resigned yet. https://t.co/UYFucwkzpe

This is in addition to our own tweets and retweets on Twitter under @groundviews.

This post will be regularly updated as the situation evolves.