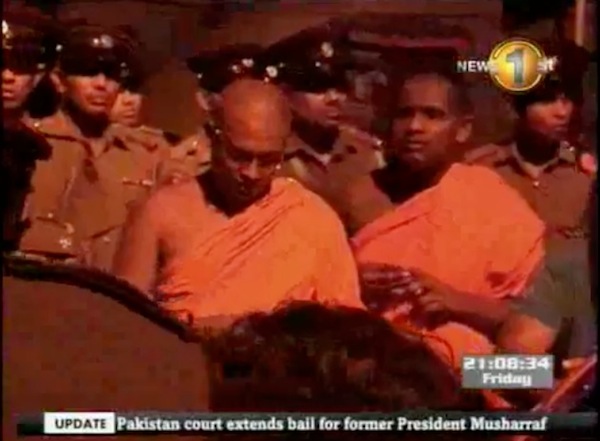 Image from video on the vigil, broadcast by News 1st.

This evening (Friday, April 12th 2013) around 7.15pm on Havelock Road in front of the Sambuddhatva Jayanthi Building adjoining Laurie’s Road, I was reminded anew that there is no freedom in our land.

I am nearly 45 years old now, and for 30 long years, I have been reminded over and over again in different places, at different times that in many ways the citizens of Sri Lanka are trapped. We have been and still are, in fact increasingly so, trapped by our fear, our intolerance, our ignorance, our sheep like obedience, either to the powers that be or to our own desperate need to play safe and stay safe.

I am not a lawyer, a journalist, an academic or an activist. I am just an ordinary citizen who is sick of being intimidated by the forces that are empowered by us to protect us. I am tired of our short sighted, nepotistic governments, our corrupt politicians, our arrogant law enforcement officers, our extremist religious leaders, and our ignorant, complacent citizenry. I am just plain tired.

This evening I walked onto Havelock Road with my husband and two children to join my sister, her husband and some friends in gathering with the many who had come to symbolically light a candle in the darkness of our land, to protest through a silent vigil, the extremist politics of the now notorious Bodu Bala Sena who were at that moment in a meeting at their headquarters in the Sambuddhatva Jayanthi Building. I was almost immediately flung into a flurry of aggressive policemen, chasing us off, shouting at us to get rid of our candles, threatening us with arrest if we did not immediately obey and disperse! Across the street two Bhikkhus were shouting and inciting the Police. Some thugs appeared to be with them, yelling and gesturing wildly at us all. We were stunned. We had expected police and Bhikkhus, but not hatred; not violence; not such flagrant abuse of power, of position. In a minute my sister received a call from her husband, still across the street near the petrol shed. He had been arrested for standing there holding a candle in his hand! He had just walked up Laurie’s road and joined the crowd. Before he could figure out what was happening, he was in the jeep with a couple of others. No one would listen to him. They took him to the Bambalapitiya Police Station. An hour later he was released, but not before my husband was accused by a Policeman whom he went to talk to regarding my brother in law’s arrest, of being, because of his rather confusing name, wait for it – a Muslim! At one time being Tamil was pretty unsafe to say the least, now it is being Muslim! Others who had come earlier for the vigil had already been dispersed, threatened, a few arrested and later released. I am terribly sad, angry, above all tired. My dear fellow citizens, if you have not realized this already, let me tell you, democracy is dead in our land.

My children, nearly 10 and nearly 15 were with me. We live nearby, it was a lovely evening, a candlelight peace vigil, and we thought it would be safe. We were wrong. My son was afraid. My teenage daughter bemused. They asked if we should migrate! I remember being 15 in 1983. A year later everyone around me migrated to Canada or elsewhere. We didn’t. My dad said this was our country, we could not, would not, be chased away. Only rats leave a sinking ship he said. He didn’t mean those who had been affected by the riots, only those who took advantage of the moment to seek greener pastures. I thought he was too harsh in his estimate. I still think he was. We were fortunate; our Sinhalese neighbours’ protected us and kept us from being burnt. Others were not so lucky. Fear was everywhere. Many felt displaced, dispossessed. Were they Sri Lankan they wondered? Did they belong? So they left. Who can blame them? But I have never forgotten my father’s words. I understood what he meant. He meant, don’t run away when the going gets tough, stay and fight. He meant find a way to give to this land so that it will progress and prosper. He meant be proud to be Sri Lankan: In spite of everything, we are a good and able people.

But today Daddy, I wondered if you were right at all. The war is over. Though I don’t believe the means justified the end, I am glad it is over. I feel safe. I don’t wake up wondering if my children will come home from school today. I don’t hear a car backfire or hear a cracker go off and think ‘Dear God, another bomb!’ Well, almost I don’t. Peace takes getting used to for those of us who have spent most of our lives in a battle scarred land!

But there are signs of peace all around us or so we are told. Roads are being built, new ports and airports, cricket stadiums, shopping malls, the works! Never mind the land grabbing and homelessness in the North; never mind the water holes being filled to keep the errant wild animals away in the South. Forget the politicisation of sports; the skirmishes caused by ministers’ sons’, the biased, state controlled media and judiciary; forget the cost of living, the petrol prices, the electricity tariffs, disease causing garbage dumps being forcibly filled under Police cover amidst protests by the community; the incredible increase in rape and abuse, a testament to the lawlessness in the land. Forget it all. The war is over. We’ll forgive our government anything.

Harassment of Muslims?  Well they should really be more careful. After all this is not really their land right? Intimidation by Police? Just doing their jobs men! They have to keep the peace even if it takes force! The Bodu Bala Sena?  Oh just harmless Bhikkhus. Ignore them. This is all just media hype! State sponsored violence? So paranoid! They saved us from the terrorists remember? Give them time. Watch them take us forward. Just give them… time.

We are sheep. What do we have in common with New Zealand? There too sheep outnumber humans! Yet people came to protest today. Not many, but we came. We were dispersed aggressively. Never mind. We saw firsthand that the Bodu Bala Sena is backed by the forces which are controlled by the State. We saw truth. Oh, we have known it all along. But today it could not be denied. Our government is behind terror. It is behind extremist Buddhist chauvinism. It needs another cause to keep our people fear ridden, to condone military presence. This is how dictatorships are built.

The story goes a teacher once asked his students, ‘what is a democracy?’ and the reply: ‘a democracy is the freedom to elect our own dictators!’ This of course is what we’ve done. But who was it who said ‘you can fool some of the people all of the time, and all of the people some of the time, but you cannot fool all of the people all of the time.’ Ah, yes, Abraham Lincoln. So sheep no more! There are amongst us people who are good and able. Unafraid. So perhaps you were right Daddy. People came today. People who will stay and fight. The Police and the Bhikkhus made a mistake. They forgot that not all are always afraid. Sometimes aggression fuels the fire of protest. May it be so. May more of us ordinary, everyday citizens, rise up and protest. Forget our past? Forgive our governments? Give them time? No bl–dy way!