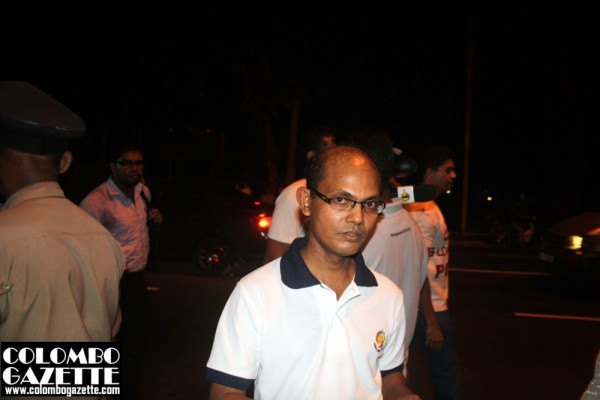 An image of a true, 100% verified, authentic, original, perfect Buddhist. Not.

I wasn’t at the vigil because I don’t do vigils and if I were to make an exception it would be for an anti-BBS/SR demonstration spearheaded by the Left (in our case that would be the JVP and FSP), as are most anti-racist demonstrations all over the world. That is in fact the friendly advice I’d give the organizers of the laudable demonstration. As a founder member, as an undergraduate in the late 1970s, of the Movement for Inter-Racial Justice and Equality (MIRJE) that took on the Sinhala racists in the ’80s or tried to, I recall that we always reached out to and networked the trade unions, peasant unions, political parties, progressive clergy, student organizations, women’s associations, university teachers and the Left. That said I was aghast, but not really surprised to read Malinda Seneviratne’s critical account of the vigil (‘The BBS ‘Buddhists’, ‘Nightclub Buddhists’ and The ‘Vigil’ That I Saw’ April 12, 2013, Colombo Telegraph). He writes:

“But there were non-Buddhists in proportions that were a fair distance away from national ratios.” Two issues arise: Firstly, how on earth could Malinda tell? Is it a visual impression? If so, isn’t this the religious stereotyping, the equivalent of ethnic stereotyping, of the worst sort? Do the non-Buddhists have longer noses than the Buddhists, as the Jews were deemed to have in Nazi Germany? Where does this lead and where does it stop? Secondly, what does it matter? Should demonstrations accord with national ethnic or religious ratios?  Are class, caste, provincial and gender ratios relevant too?

Malinda go onto say : “I was disappointed that there was little to tell me that the group was made up of people outside of the ‘facebooking’, English-speaking middle and upper-middle class.  I was less disappointed than perturbed when I noticed that in that group there were individuals who have been violently anti-Buddhist and anti-Sinhala…”

Here again, what is the implication? That Buddhists (or good Buddhists) don’t use Facebook or do not belong to or come from the English speaking middle and upper middle class? Or is that they are Buddhists only if they use Facebook to abuse Muslims? How would this class criterion fit Prince Siddhartha?

It is perfectly possible, even likely, that  my own views are diametrically opposite to those of some of the crowd, especially on the war, the CFA and the current and long-standing leadership of the UNP, but I do not know the basis on which one can state as Malinda has, that in the group “there were individuals who have been violently anti-Buddhist and anti-Sinhala…” Were they/are they really ‘violently anti Buddhist and anti-Sinhala’, or simply anti-Sinhala Buddhism as an ideology? Could it be that Malinda is conflating the two? And by the way how ‘violently’ anti-Buddhist and anti-Sinhala were they? As violent as the mobs of July ’83 or those who threw a grenade at the Shah Rukh Khan show, or even those who stormed the Fashion Bug or verbally abused minorities (‘hambaya’ goni billa’, un-mun-arun’), and threw rotten eggs at shoppers?

Malinda writes that “My Muslim friend wrote, ‘What’s the ugliest thing in uniform? – a biased cop. I saw one today declaring pompously that everyone gathered at the vigil was either Muslim, Catholic or Tamil…’ I heard that too. The Police Officer can’t be faulted if he wondered how a ‘Buddhists against BBS’ event had so many non-Buddhists.”

Why pray can’t he be faulted? What business is it of a police officer to query the religious composition of a demonstration? Shouldn’t he be faulted precisely for having posed such a question? How did he come to that conclusion anyway— which by pure coincidence is the same one Malinda came to? Where in the world, outside of an Islamic theocracy would the police pose such a question and where in the world would a Chief Editor of an English language mainstream newspaper think it ok?

Malinda outdoes himself with the following paragraph: “…someone referred to the anti-BBS ‘Buddhists’ as ‘Nightclub Buddhists’. Strange juxtaposition and descriptive, yes, but it also raised questions of social status, class, lifestyle etc.  A Buddhist is a Buddhist, whether he/she wears white or black, a sil redda or jeans, but clothes mark and they mark well.  This was no Buddhist Cross-section, that much was apparent to me.”

Quite apart from the question of whether ‘Nightclub Buddhists’ who  aren’t guilty of hit and run drunken driving of a lorry (a greater vehicle?) are somehow less Buddhist than the “Bay-badu Bala Sena” ones, what precisely does Malinda mean by ‘raises questions of social status, class lifestyle’? What questions? Of course clothes do mark but how do “clothes mark and [they] mark well”, in relation to Buddhism and the issues at hand? When once again Malinda says ‘this was no Buddhist cross section, that much was apparent to me’, how was it apparent, why is what is apparent (the result of sense impressions) taken to be the truth – which doesn’t sound much like the Dhamma—and what does any of it has to do with Buddhism, still less the legitimacy of a protest against religious fanaticism?

This hardly seems a fair or rational critique.

On the Operating Table

Religious Freedom and Coexistence: Beyond the Aragalaya