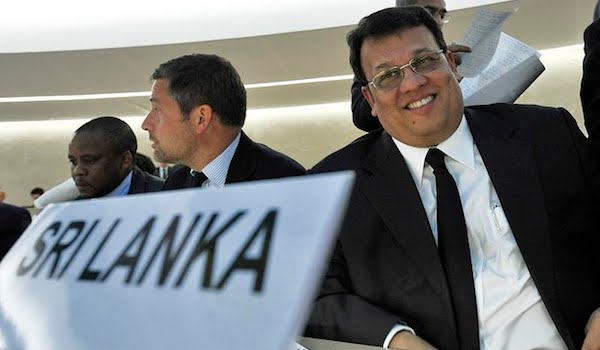 So it looks like the US will bring another resolution on Sri Lanka at the next session of the UN’s Human Rights Council (HRC) in Geneva this March. Quite frankly – I am shocked.

US foreign policy as it relates to Sri Lanka has been confusing and is replete with complications and contradictions.

One can’t help but wonder: Where is all of this heading? Is this a road to nowhere?

I really wish I knew. But at this point, I’m not sure that anybody does.

The US didn’t seem to be that concerned about human rights here when people were being slaughtered in 2009. Make no mistake about it: Washington knew what was happening. As a friend of mine (who is well-versed on what actually transpired) told me, “Nothing that occurred in 2009 happened suddenly. People had to have seen it coming.”

I suppose another resolution on Sri Lanka at the HRC would be better than nothing. At least we would know that diplomatic pressure won’t fade away entirely. Nonetheless, I’m still left wondering if any of it matters. If the time for tougher, stronger action has not yet come, when would it ever? Is the US really going to aim for another light resolution and pretend that it will change the regime’s behavior?

It won’t. Another weak resolution won’t mean anything to anyone—except the regime in power.  It will simply mean they’re still winning.

Which leads to another question: Would the US really be pushing for another resolution if the Chief Justice had not been impeached?

It’s an interesting counterfactual to consider. Counterfactuals can be particularly thought-provoking because nobody knows what would have happened. Maybe the impeachment saga crossed a line that made inaction or policy inertia (at least as it relates to human rights) impossible. I suspect that it did.

As far as I can tell, President Obama has no Syria policy and well over 60,000 people have been killed there. And make no mistake: the rebels, a variegated group – to say the least – are not saints. And then in Mali, the French are leading the way. The US is providing intelligence. That’s it. No boots on the ground. It’s one thing for the US to “lead from behind” in Libya; France’s establishment of a more muscular foreign policy in North Africa is another issue altogether.

I’m not suggesting that the US should be intervening in either place, but the conflicts in Syria and Mali are arguably of much greater strategic interest to the US than Sri Lanka. And yet it looks like Washington is prepared to spend diplomatic resources again on a small island nation, albeit only in the form of another watered-down resolution which will provide no impetus for change.

The Government of Sri Lanka (GoSL) is blatantly lying to people about its implementation of the LLRC recommendations. Groundviews recently published something that made this very clear.[1] Deception with this regime isn’t sporadic; it’s systematic because the GoSL can’t afford to be candid about the current state of affairs.

It’s very clear that Barack Obama wants his legacy to lie in sweeping domestic changes. He wants to get out of protracted wars and avoid diving into another conflict like Syria or Mali. And it looks like he’s going to do that. His nominees for State and Defense are both men who will be reluctant to use military force abroad. Obama likes his drones – in spite of the “collateral damage” to civilians and his Nobel Peace Prize – but he fundamentally believes in using American power in a more limited way. Barack Obama is not yet a champion of human rights overseas; he probably never will be.

I’m really tired of reading about how the United States government is concerned about developments in Sri Lanka. If Washington really is concerned, Obama should prove it by making diplomatic isolation a reality for the regime in Colombo. To put it more bluntly, when it comes to human rights in Sri Lanka, Washington should “go big or go home.” Things are bad here and getting worse. Sri Lankans who are not happy with recent governance trends have a right to know who their friends really are.