The sudden and allegedly suspicious death of former General Secretary of the UNP and Minister of Transport, Highways and Civil Aviation, Gamini Athukorala (in 2002) seemed to have marked the end of a critical phase in Ranil Wickremasinghe’s political career; a phase which spanned from the early 1990s to 2002. During this phase, Ranil saw most of the charismatic and senior colleagues in the UNP being assassinated [President Premadasa, Lalith Athulathmudali (then in the DUNF), Gamini Dissanayaka et al], or pass away (Gamini Athukorala). The deaths of these leaders, almost effortlessly and unwittingly made Ranil the undisputed Leader of the UNP, as well as of the Opposition, and more importantly, made him remain there without much trouble.

The next critical phase began thereafter, and continues to date. But this is not one in which Ranil sees his political challengers passing away. It is one in which such challengers are being either arrested, detained or imprisoned. One significant landmark in this regard was the imprisonment of Minister SB Dissanayaka, who was considered at that time to be the most potent threat to Ranil, having almost single-handedly toppled President Chandrika Kumaratunga’s government (earlier, in 2001). Most recently, Ranil faced another threat which came in the form of General Sarath Fonseka. Just then, Fonseka was arrested.

Dangers of rushing to embrace a formidable threat
Ranil’s role as the leader of the opposition has been greatly overshadowed by the presence of Fonseka in the political mainstream during the past couple of months. Many began seeing Fonseka as a de facto Opposition leader in case he lost the Presidential election and was elected to Parliament in April. In any case, Fonseka is too dominant a figure to be overshadowed by Ranil, and during the Presidential election campaign, it was clear that a depleted Opposition alliance, including the UNP, had been invigorated by the ‘war-hero’. Fonseka was far more popular than Ranil, and almost all within the Opposition (except for those who crossed over), including Ranil himself, believed that it was only Fonseka who could have successfully challenged President Rajapaksa at a Presidential election. Even though the argument can be raised that Fonseka polled lesser number of votes than the number of votes polled by Ranil in 2005, the popularity of the two cannot be compared by reference to the two elections which were held under very different circumstances.

Ranil is too experienced, and too shrewd a politician, to not realize the above. In fact, Ranil would have also felt that if Fonseka was able to challenge President Rajapaksa at the zenith of his popularity, challenging Ranil, if necessary, would be a relatively simple task for Fonseka.

All this makes Fonseka a ‘political prisoner’ in the eyes of Wickremasinghe. But, what is crucial here, is that Fonseka is an ideal political prisoner who is, in the final analysis, immensely beneficial to his (Ranil’s) own political career. Having being humiliated during the Presidential election, the sudden arrest of Fonseka provides Ranil with a wonderful opportunity to regain some of the lost prestige; by coming out in defence of Fonseka. It was Fonseka who was considered by some to be a ‘savior’ of the UNP not so long ago. And this sudden twist of fate makes Ranil look like a possible savior of Fonseka.

But is it so? Can Ranil ever be sincere in his fight against the arrest of Fonseka? It is here that the release of Fonseka complicates matters for Ranil.

The first hypothetical scenario damages Ranil very significantly: i.e. The scenario where Fonseka comes out as one with a ‘not guilty’ verdict, cleared of all charges (which are yet to be clearly framed), by the military tribunal and/or the civil courts (a remote possibility, one might add). In such a scenario, Fonseka re-enters the political scene as a virtual political hero: as a man who (in the eyes of many who oppose the Rajapaksas) stood fearlessly against the ‘despotic’ leadership of the Rajapaksas, a man who escaped from the false allegations leveled against him, a man who having fought the LTTE has now fought, and is fighting, the Rajapaksas. And in such a scenario, it is not difficult to imagine where Ranil would stand. Would he not be dwarfed by the presence of Fonseka? And is it not why that the General Secretary of the UNP Tissa Attanayaka claims, that he or his party did not know anything about the launch of the online petition seeking signatures supporting Fonseka’s release?

The second hypothetical scenario is more favourable to Ranil: i.e. Fonseka coming out somewhat bruised, found guilty of some of the charges, not guilty of some others. Such a scenario (depending on the penalties imposed) would help Ranil maintain some composure, for Fonseka would not be able to appeal to the masses as a ‘clean’ candidate who deserves greater recognition than Ranil himself. Fonseka would be hurt, Ranil would be saved.

While the above are hypothetical scenarios, Ranil would still worry about the more immediate problem: the upcoming General Election. What happens if Fonseka (from the DNA) gives a stiff fight to Ranil (in terms of preferential votes)? This looming danger makes Ranil an unwilling supporter of Fonseka’s release, for ‘support’ in this context could draw ‘sympathy votes’ for Fonseka. One should not forget that the upcoming general election is one which will also test, to a great extent, the popularity of the two candidates: Ranil from the UNP vs. Fonseka from the DNA. Ranil knows this all too well, and he is today seen drifting away from the Fonseka camp. 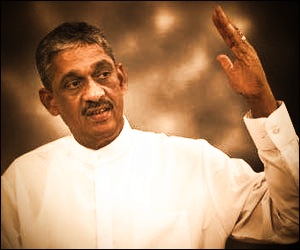 Dangers of having a grave-digger in your own backyard
While Ranil has much to gain from Fonseka’s arrest and detention, the Rajapaksas too find it convenient to see him where he is, today; for obvious, and perhaps far more serious, reasons.

As President Rajapaksa admitted elsewhere, the arrest of Fonseka during the Presidential election campaign would have sent a very wrong signal to the public; one which would have clearly meant that Rajapaksa was politically threatened by Fonseka. The comprehensive defeat of Fonseka makes President Rajapaksa more confident of the fact that the former is no serious political threat to his own existence or in a general election.

But the problem that the Rajapaksas (i.e. President Rajapaksa and Gotabaya Rajapaksa in particular) face is not the kind that Ranil faces. The problem here is with regard to the accusation of ‘war crimes’. Serious allegations have already being made against Defence Secretary Gotabaya Rajapaksa, who was alleged by Fonseka as having given ‘stupid’ orders to kill certain LTTE leaders carrying white flags. And Fonseka had reiterated this on that fateful day when he was arrested.

It is this accusation of ‘war crimes’ which seems to be most deeply distressing, even frightening, for the Rajapaksa administration. This is not only because an allegation has been made, but also because it is made by the former Army Commander. And if there is any single man who needs to be considered seriously in this regard, it is most certainly Fonseka. What is more troubling for the Rajapaksas is that they see in Fonseka a person who would go all out against them, even urge the international community to intervene in the matter; as he did just before he was arrested.

Here again one needs to consider the possible impact and seriousness of Fonseka’s release in the context of the two hypothetical scenarios set out above.

Firstly, what happens if Fonseka comes out clean? It is difficult, in such scenario to believe that Fonseka would go all out so suddenly against the Rajapaksas on the ‘war crimes’ issue. This is because Fonseka should, or would, very well know that proceeding to The Hague to meet the Chief Prosecutor of the ICC, Luis Moreno-Ocampo, is not the politically correct thing to do. He would also know that an ‘international’ investigation is highly unlikely (especially in the form of a directive issued to the ICC by the UN Security Council under Chapter VII of the UN Charter), and that given that reality, he cannot afford himself to be seen as the sole individual in the country who proceeds to some place to furnish evidence against the Rajapaksas. But doubts would always remain (and one does not need to ‘travel’ to The Hague if the intention is to provide the Chief Prosecutor of the ICC with necessary evidence). And also, the Rajapaksas would see Fonseka receiving greater support from the ‘international community’; support which will come, when and where necessary, given also the fact that serious accusations have been leveled against States such as the US and Norway of supporting Fonseka’s election campaign, without any serious evidence being produced to substantiate those serious accusations.

Secondly, what of the second hypothetical scenario, whereby Fonseka comes out bruised? In such a scenario, Fonseka’s urge to take immediate revenge would certainly be far greater than it would be in the above scenario. This is not only because Fonseka would find his reputation as well as his political stature greatly tarnished by some of the court rulings against him. But also because he could even think that he has nothing to lose personally even if he nails the Rajapaksas on the ‘war crimes’ issue. The effort would be made much easier, given also the most recent developments; i.e. The setting up of a Panel of Experts which would advice the UN Secretary General on developments concerning accountability issues in Sri Lanka. Cooperating with such a mechanism (even though the Terms of Reference governing this Panel’s work are yet to be publicized) would be seen to be an easy task.

Apart from these two scenarios, the Rajapaksas, just like Ranil, face the immediate problem: the General Election. This is certainly not in the form of a threat to the UPFA winning the election. The UPFA would win. But what happens if Fonseka comes out on top in terms of preferential votes, or makes a significant impact? In such a case, and from thereon, the pressure exerted on the government concerning the entire Fonseka-episode would mount considerably, and the pressure would spill-over to the judicial proceedings which might commence shortly. Here then would be a man who has received public support and sympathy at an election, and the performance of Fonseka and that of his party would be closely watched; not only by the Rajapaksas, but also by other pressure groups, within and without.

Conclusion
No other politician’s arrest, detention or even release would have an impact on so many powerful political figures as that of Fonseka’s. It was clear that the Fonseka-phenomenon became a severe headache to the Rajapaksas, a pleasant headache to Ranil, the very moment Fonseka was endorsed as the ‘Common Candidate’, not so long ago. Today, it is clearer that he is a common problem, a severe and enduring headache, not only to the Rajapaksas who opposed him, but also to Ranil Wickremasinghe who embraced him. What do politicians do with such kinds of headaches?