On July 23, former UN Special Rapporteur on Counter-Terrorism and Human Rights, Ben Emmerson released a report following on from his visit to Sri Lanka in 2017.

Emmerson pulled no punches in his report – saying that the need for repealing the Prevention of Terrorism Act (PTA) was “unequivocal” while urging that any replacement legislation be aligned with international standards.

“The case for repealing and replacing the #PTA is unequivocal” @BenEmmerson1 recommends an immediate moratorium on PTA, take urgent steps to repeal it – https://t.co/BcMl7Rs9Qj #lka #SriLanka pic.twitter.com/3RiKZqxUI7

Emmerson met with representatives of Government, several High Court Judges, and a number of detainees during his visit. His findings highlight the deep and lasting impact that legislation such as the PTA have had in perpetuating police brutality and torture, even post-war – a fact already highlighted by several bodies including through the Human Rights Commission, which noted that the practice of torture was ‘routine’ in 2016.

Often, detainees were made to sign statements or confessions in a language they did not understand.

The PTA allows for broad admissibility of confessions, acknowledged as a contributory factor allowing for torture of detainees, but it is sobering to see just how widespread this is in practice.

A Colombo High Court Judge told Emmerson during his visit that he had been able to accept only 1 out of 11 confessions as evidence, while a Judge in Anuradapura noted that 12 out of 14 cases before him were based solely on unreliable confessions.

The solution put forward by the State has not helped to inspire confidence.

These concerns echo those long raised by members of civil society.

Legislation like the PTA must be placed in the context of ongoing stigmatisation against the Tamil community, including underrepresentation at an institutional level, Emmerson noted in his report.

Emmerson’s statement at the conclusion of his visit in July 2017 was not received kindly in some quarters – to put it mildly. Former Ambassador and Permanent Representative to the United Nations in Geneva Tamara Kunanayakam and former Ambassador and Permanent Representative to the United Nations, Dr Palitha Kohona termed it “ arbitrary, judgmental, arrogant, accusatory, threatening, interventionist,and insulting” and charged that the Special Rapporteur had exceeded his mandate. The then Minister of Justice, Wijeyadasa Rajapakshe charged that Emmerson lacked ‘calibre and diplomacy’. These statements were given coverage by mainstream media, shifting the focus away from any examination of the substance of the statement, even though, as Groundviews noted in 2017, members of civil society felt Emmerson’s statement accurately represented the current situation on the ground.

In contrast, Emmerson’s final report made barely a ripple in mainstream media coverage locally (although a report in the Guardian noted Emmerson’s scathing review of the reforms process, which he said had ground to “a virtual halt.”)

Groundviews spoke to a cross-section of civil society on the findings of the report, including activists, lawyers and members of civil society. (The Minister of Justice was unavailable for comment at the time this story was published – Groundviews made repeated attempts to contact her for a comment on the report.) “The Special Rapporteur’s report is one of the most comprehensive in recent times, highlighting some serious concerns related to counter-terrorism and human rights in Sri Lanka,” activist Ruki Fernando said. “His call for a moratorium on the use of the PTA until the Government fulfils its promise to repeal it is significant. The PTA was reportedly used to arrest Tamils even last month, despite the September 2015 promise to repeal it.”

However, Fernando did raise some concerns with the Rapporteur’s suggestions on the CTA. “The Rapporteur supports [the introduction of a CTA] on the condition that it adheres to international human rights law, without addressing the fundamental question of whether there is, in fact, a need for special counter terrorism laws.”

There was no reference to the trend, both in Sri Lanka and globally, on misusing such laws against particular communities in order to suppress dissent, Fernando pointed out.

Many of the trials for PTA detainees are not held in areas with a significant Tamil population, despite the majority of these detainees being Tamil.

Fernando added that the former Special Rapporteur had chosen to take a legalistic approach to the CTA without commenting on the political context – missing out important points such as the secrecy with which laws in Sri Lanka are often drafted, and the lack of a consultation process around them, including in this instance, from survivors and families of PTA detainees. The Rapporteur had received access to the draft law, but members of the general public did not have the same level of access, Fernando pointed out. Attorney-At-Law Ermiza Tegal echoed Fernando’s concerns on access and the need for a replacement law. “I would disagree fundamentally with the position that Sri Lanka needs a CTA…The damage caused to the fabric of civil liberties under the PTA cannot be reversed by a CTA. By continuing to give primacy to the security of State over individual security and liberty, we continue to protect impunity entrenched in the legal and policing systems,” Tegal said. In addition, the wide-ranging powers available under the Public Security Ordinance, and the possibility of enacting specific offences if needed pertaining to terrorism under the ordinary law, and of taking executive measures to strengthen police response in a crisis, all indicated that a special law such as the CTA was not needed. “Legislation similar to the CTA continues to recognise extraordinary powers and discretion for the executive. Sri Lanka needs laws and measures to protect civil liberties and freedoms, not laws that will contribute to eroding the rule of law.”

Tegal added that she had seen firsthand the deeply problematic effects of the PTA – “There have been cases within my own experience of complaints of police torture, mainly in the South of Sri Lanka, in which purported ‘confessions’ or even statements said to be signed by the victim surface, and the victim of torture denies giving such a statement.”

One of the main reasons for torture in the cases Tegal had handled was for the extraction of a confession – tallying with the accounts of the High Court Judges Emmerson had spoken with during his visit. “I would say forced confessions are a familiar practice associated with criminal investigations,” she said. Attorney-at-law Kishali Pinto Jayawardena said the Government should take Emmerson’s warnings seriously, particularly those on the draft CTA. “As at this date, Sri Lankan citizens have no idea as to the status of this draft framework. This must be released for public scrutiny well before it is presented as a Bill,” Jayawardena said.

Although the State has repeatedly made the case that examination of detainees by a Judicial Medicial Officer was a sufficient safeguard to prevent torture, Emmerson’s observations and numerous cases indicate otherwise, Jayawardena said. The issue of uninhibited access to an independent lawyer was also important.

“These are concerns that must be addressed substantively, not superficially,” Jayawardena said.

Jayawardena was not the only person to note the importance of political will. 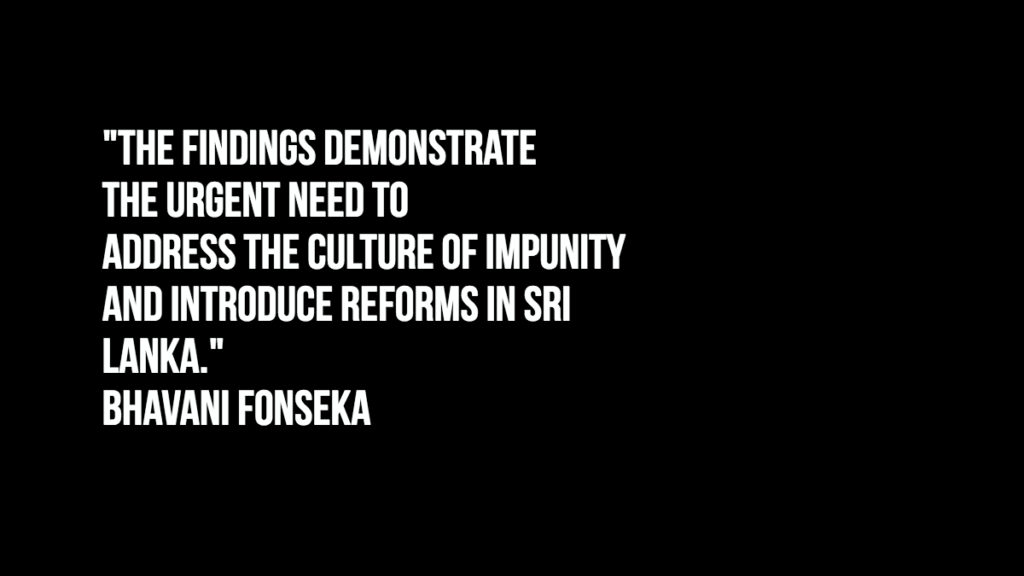 Senior Researcher, Research and Advocacy from the Centre for Policy Alternatives (CPA) Bhavani Fonseka noted that President Maithripala Sirisena and the current government had promised to put in place a range of reforms, including the repeal of the PTA and the introduction of new legislation, in adherence to international standards.

“Despite these promises, the PTA continues to be used, with media reports indicating that suspects are as recently as July 2018 being indicted under the PTA Regulations. The custodial death in June this year and reports of torture are a grave indictment of a government that promised an ambitious set of reforms in 2015.”

These are concerns long raised by civil society, which Emmerson’s report has only underscored. (In fact, CPA was the only civil society organisation to challenge the PTA Regulations in Supreme Court in 2011.)

The continued use of the PTA raised serious concerns towards the deprivation of civil liberties, Fonseka said.

While some space has opened up for civil society input post-2015, Emmerson’s report demonstrates the urgent need to address the culture of impunity and introduce urgent reform. Executive Director of Adayaalam Research Kumaravadivel Guruparan said that Emmerson’s report made it clear that there had been “zero security sector reform” given the continued use of torture, adding that in his view there was no real political willingness to repeal the PTA.

“The commitments in Geneva were mere rhetoric, part of the Government’s ‘soft diplomacy tools’ in their foreign policy management strategy,” he said.

Unlike Fernando, Guruparan felt that Emmerson’s report did include some important context on the PTA specifically, on continued discrimination against the Tamil community.

“[Emmerson’s report] acknowledges that Tamils have borne the brunt of the [PTA] legislation disproportionately and makes it clear that the law remains in place as an instrument of oppression against the Tamil community. “

Human rights reporting’ in and on Sri Lanka has artificially sought to depoliticise the issues at hand, in turn leading to a de-Tamilised narrative of the conflict. Ben Emmerson’s report is an outlier in this sense,” Guruparan said.

Adding to this, the North East Coordinating Council (NECC) spoke of the continuing practise of militarisation and surveillance in the North and East, and the lasting impact this had on members of the community, including civil society and activists.

NECC responded to sections looking at length of detention and the use of torture, discrimination against Tamils, and recommendations made on the CTA, habeas corpus trials, demilitarization and the UNHRC resolution.

Surveillance took many forms. The police and military would often use local informants, the NECC said. Sometimes, this included local government officials and administrative officers, who were pressurised into providing information. Intelligence personnel would join community meetings and surreptitiously video them, or follow and video members of civil society. At times, the intimidation was subtle– members of the Intelligence services would question neighbours, with the intention of ostracising civil society among their local communities.

This surveillance often extended inside the court-room, particularly for habeas corpus trials, highlighting the need for witness protection and the need for protection for lawyers and detainees.

Though Emmerson had personally met PTA detainees held without charge had for years (with some of the detained having been held for over a decade) arbitrary arrests had in fact begun in the early 80s, particularly when thousands of Tamil youth were detained and tortured in the infamous Boosa detention camp a representative from NECC who requested anonymity said. In particular, women were subject to torture, and humiliating “punishment”, often sexual in nature, at detention centres.

This is not to say that there have not been incremental steps in the right direction. A directive issued by the Human Rights Commission in 2016 to police on arrest and detention under the PTA made recommendations on the process during and after arrest, including specific provisions for women and those under 18 years of age. Also in 2016, the Government adopted a zero tolerance policy on torture, while the police appointed a Committee to eradicate Torture. In 2017, the Supreme Court ordered Batticaloa police to pay over Rs. 2 million each to the parents of two youth tortured and killed in police custody, following the filing of a Fundamental Rights case.

The people Groundviews interviewed for this piece include members of civil society based in the North and East, lawyers and activists. While there were disagreements on finer points, what is striking is the almost universal agreement that Emmerson’s report only underscores ongoing, pervasive issues on torture and arbitrary detention.

Yet, the apathy with which Emmerson’s report was received does not bode well for Sri Lanka’s prospects of long-term reform.