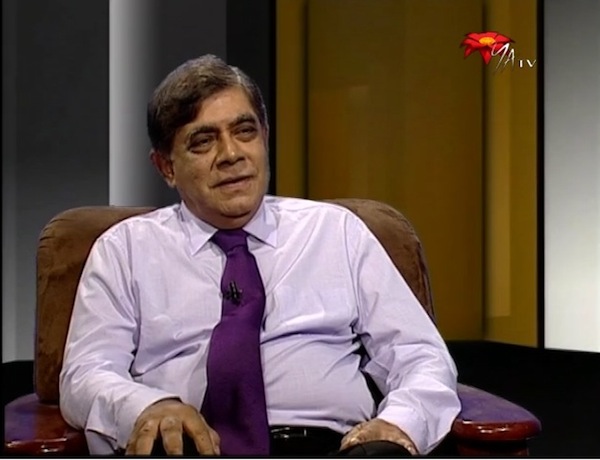 Nihal Jayawickrama, LLB (Ceylon), PhD (London), was the Permanent Secretary to the Ministry of Justice from 1970-1977, having been admitted to the Bar as an Advocate of the Supreme Court in 1962. As Dr. Jayawickrama notes in this chapter to The Sri Lankan Republic at 40: Reflections on Constitutional History, Theory and Practice, edited by Asanga Welikala,

My involvement with the drafting of the 1972 Constitution commenced with my unexpected appointment as Permanent Secretary to the Ministry of Justice shortly after the May 1970 general election. When I was invited by the new Prime Minister, Mrs Sirimavo Bandaranaike, to leave the Bar and become a public servant for the next five years, she assured me it would not be to appoint justices of the peace, but to formulate and implement a comprehensive programme of legal and judicial reform about the lack of which I had been complaining to her for some time. At the age of 32, that was a challenge. I was not a member of her political party, or indeed of any other. However, my association with her while she was in Opposition, as a lawyer whom she consulted on legal matters, and sometimes on political matters with legal implications, provided me with sufficient confidence to venture into the wholly unknown world of public administration and political intrigue.

In this brief interview recorded for public television in Sri Lanka with Dr. Jayawickrama, we delve into several aspects of his chapter and the points he notes therein. We begin on a personal note – what, as a young lawyer of 32 at the time of his involvement in the drafting of Sri Lanka’s first Republican Constitution, Dr. Jayawickrama felt and experienced. Given the robust consideration of the role of women and gender in the process of constitution making in The Republic at 40, Dr. Jayawickrama reflects on how through personal initiative and for the first time, he brought in women to hold offices previously held by men.

We then go on to talk about how, if at all, the process of constitution making in Sri Lanka had changed from the 70’s to more recent efforts. In his chapter, Dr. Jayawickrama avers that when he attended the first meeting of the drafting committee, he and others present were provided with an attractively printed version of the Constitution of the Federal Republic of Yugoslavia. In light of this irony, and how Sri Lanka’s clearly and with increasing violence, moved away from federalism, Dr. Jayawickrama looks at whether the drafting of the ’72 constitution, and all constitutional processes since, were, despite the best efforts to resist, hostage to the juggernaut of Sri Lanka’s dominant ethnic group. Linked to this, the next question deals with why fundamental rights and civil liberties were so weak in the ’72 constitution, a trend that has only accelerated in subsequent decades.

Based on Dr. Jayawickrama point that the 17 member steering committee to draft the ’72 constitution were largely Sinhala Buddhist’s from the Goigama and Salagama castes, he goes into what role, if any, caste politics played in constitution making at the time.

“Those who asked for and received a section on fundamental rights and freedoms in the coming constitution have wanted it because they feel that some special protection is needed in certain matters. Now, I may view that to endeavour to give such special protection can be an obstruction in the way of the progress of…an under-developed country.”

Akin to and by decades, prefiguring Kishore Mahbubani’s position on human rights in Can Asians Think?, Dr. Jayawickrama places this overt disregard for fundamental rights in the socio-political context the ’72 constitution was drafted in.

In Dr. Jayawickrama’s chapter, S.W.R.D. Bandaranaike is painted in a rather charitable light. Though Dr. Jayawickrama very clearly flags that majoritarian and expedient language politics by the Sinhalese played a central role in the radicalisation of Tamil polity and society, he does not explicitly refer to the abrogation of the Bandaranaike–Chelvanayakam Pact and its serious, lasting ramifications. Dr. Jayawickrama explains why he thinks that had he lived for another year, Bandaranaike may have gone on to remedy the corrosive political forces he had unleashed.

Towards the end of the interview, Dr. Jayawickrama speaks more broadly about what he meant by his assertion in his chapter that ‘political ideology has no place in a constitution’, in light of the submission that any constitution is animated by, though not necessarily hostage to, certain political ideologies and the context in which it was given life to.

In his speech at the launch of Republic at 40 in Colombo, Dr. Jayawickrama gave a scathing critique of the Rajapaksa regime, asserting that Sri Lanka today has moved beyond an Executive Presidency based model to a corporate governance mode for the entire country – the Rajapaksa ‘sangamaya‘ (or company) – as noted by the President’s brother, Basil Rajapaksa (see The Rajapaksa ‘Sangamaya’: Creating employees and customers of citizens for video). Dr. Jayawickrama ends the interview by locating the current regime’s illiberalism and violence in the culture, traditions and powers expressed in and given life to by the ’72 Republican constitution.