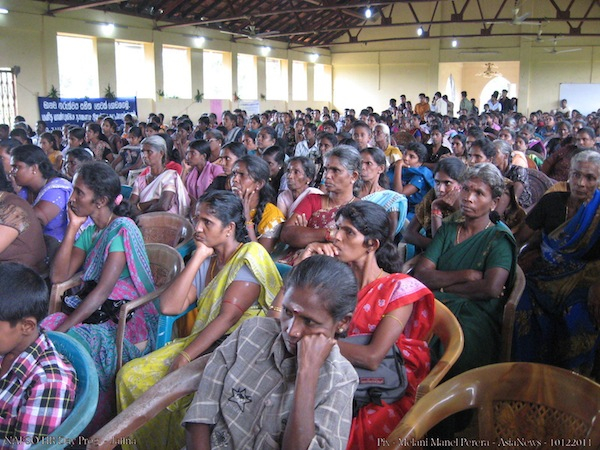 It was a practical examination session for a training of gender trainers in the Jaffna district. The trainees had to conduct a day’s training on gender issues in a village called Thoppukkadu located in Karainagar. The participants were widows who were beneficiaries of a livelihood assistance project implemented by the UNDP.  Watched by the keen eyes of the examiners, the trainees began their training session.  As usual, the first formalities of a typical participatory mode-training program   were observed. The question  “What are your expectations  (of this workshop)?”  travelled around the room.  While the first few respondents  said some mundane things such as “want to learn about gender” , “want to know each other” and so on, one participant decisively got up. “My husband was  abducted in 2008 and is missing since then… I want to find him.” There ensued an uncomfortable silence in the hall. The poor trainee who was conducting the session was clueless as to how he should respond to this rather unusual expectation of a training programme. So he nervously passed his eye to the next participant who answered “I want to learn how to apply gender issues in real life problems”.  Instantly he blurted out, “Good”. The examiners later quizzed him. Of all the words in the English language, why did he choose the word “good”? As if the previous  expectation was bad?

As the group delved in to the deeper meaning of this particular interaction, the dilemmas faced by the welfare oriented  NGOs  working in the war affected regions became  more  and  more  apparent.  On the one hand they  are forced to work with the rhetoric of “peoples participation” and “empowerment”.  They have to accede to the demands made by the donors in this respect. But on the other they have to work within a system that  is unmerciful and relentless in its grip on centralized  political power.   Even the civil administration in those areas has changed a great deal. The transformation is to the extent that the language hitherto spoken only by the military hierarchy,  such as “ granting  permission”  and  “ban on activities”,  is used now  by the civil administration in their day-to-day interactions with  NGOs.  A single wrong move on their part may mean end of the road for  the NGOs. It is  in working with the most marginalized of the war-affected community that these  vulnerabilities of the NGOs  get to be exposed thoroughly.

Take any commonplace problem posed by typical project beneficiaries in the North and East.  “Since I was relocated I have lost my livelihood”, “I get frequent headaches and cannot engage in any economic activities”,  “I do not know where my son is”,  “ I had submitted an application for housing assistance but I am told some Minister reallocated these houses to some other beneficiaries” and  so it continues.  Any attempt at dealing with any one of  these problems  is to go at logger heads with the State,  challenging policies regarding  national security , endangering   the impunity enjoyed by the  military personnel, and  telling on those politicians favoured by the regime. Imagine if it was a war-affected widow. She  faces all of these multiple problems and more at one go. She actually becomes an embarrassment  to  the  project exposing  the big ‘empowerment’ lie.  The scene at the training session is replayed  every day in the field.  In meetings organized by the NGOs  the widows  attend to pour out their  emotions, only to find the  field workers  listening to them in embarrassed silence.

Government  statistics  indicate that there are approximately 89,000 widows affected by the war in the North and East. The  one strategy  under the given circumstances would be to translate these numbers  in to a veritable  pressure group. Mobilizing and organizing them  so as to effectively access local government services, to carry out policy advocacy regarding  delivery of economic assistance by government and NGOs, and to campaign for the protection of  civil and political rights, would mean giving them a collective voice that calls for radical changes.  But the challenge here is, building their confidence and capacities to conceptualize the linkages between  what they term as their personal problems, to the constitutional and governance crisis enveloping the country. That is in fact, the process of their empowerment.

This project has now been initiated  in selected areas of the North and East.  The activity begins with forming     “Forum of women heads of households “in every Divisional Secretary’s Division.  As searching for livelihood options and accessing necessary resources for their implementation  are  constant issues  for them, facilitating their meeting  with financial institutions and donor agencies become invariably the first set of actions.  Often times it has been proved  that  the members of these forums do manage to obtain some loan facility or assistance for their ventures as soon as they directly communicate to service providers. They are also linked to sections of the Tamil diaspora, which are willing to provide assistance for micro credit or education for their children. Other activity related to livelihoods is  to organize the women in to producer cooperatives.  Cooperatives are effective  ways of pooling resources and labour, and providing mutual support in personal ways. For instance, women who have not been able to meaningfully engage in economic activities due to the burden of childcare could seek help from their fellow producers  in sharing that responsibility. They can access markets and marketing services more effectively.

However, as mentioned before, the  real  challenge before us is to initiate the process of empowerment for  them. This entails reaching out to every single widow, and setting in motion a comprehensive civic education programme for her. For this purpose, the strategy of  connecting  each forum  to other civil society networks in the locality, especially the network of  Women’s  Rural  Development Societies (WRDS), is employed.  These networks   not only provide  help in mobilizing financial resources for the forum members, but also a leadership that is prepared to take the responsibility to conduct adult education sessions for them on a regular basis. Basic principles of human rights and democracy, CEDAW, UNSCR 1325, LLRC recommendations, the role of local governments, provisions of the Sri Lankan constitution  are some of the materials prepared for their use. Sometimes  the  unexpected results after these education sessions. After reading on CEDAW and the UNSCR 1325, one women’s group in the North decided that in  future  they would not ask for permission from the local military commander  when they organize  their regular  meetings and functions.

The third level  would be to link the widows’ forums with regional and international networks that could facilitate their voices to be heard at the level of the UN. Lily Thapa is an activist widow in Nepal who has spearheaded the formation of the South Asian Network  for Widows Empowerment and Development (SANWED).  Similarly, Margaret Owen is another advocate of rights of  widows and who has formed  an organization called Widows for Peace through Democracy (WPD) that is accredited with the  ECOSOC. Currently moves are afoot to ensure that  the issue of widows is specifically mentioned in the general recommendations of the CEDAW committee for the year 2013. The widows from  Sri Lanka intend to include  the  recommendations provided in the LLRC report pertaining to women heads of households as part of the agenda  of these deliberations.

Thus, there  are innumerable  possibilities available to NGOs to turn the situation around. They only need to step away from their ‘project’ mode and  be committed to finding genuine solutions, which will pave the way for  immense creativity in their work.

This article is part of an initiative to document and share the progress of the Sri Lanka government’s official reconciliation process. If you are interested in finding out more about the implementation progress of the LLRC recommendations, please visit Vimansa, a website independent of Groundviews.