Following the assassination of Neelan Tiruchelvam by the LTTE on 29 July 1999, in a spontaneous outpouring of grief and loss, friends and people with whom he worked, including from the institutions he founded, remembered and honoured him by painting peace and floral motifs and the quote ‘Secure the Sanctity of Life’ in Tamil, Sinhala and English on the surface of the road where his life was snuffed out. This initiative called for the celebration of life and sought to counter violence and disregard for humanity. It reiterated the sanctity of life, a principle forming the core of Dr. Tiruchelvam’s parliamentary speech on the death penalty. Beginning at the site of his assassination, this initiative later spread to other parts of Colombo where bomb blasts and assassinations had taken place. Over the last 13 years, twice a year on Neelan’s birth and death anniversaries, the road painting has been repeated at the Kynsey Road-Kynsey Terrace junction. 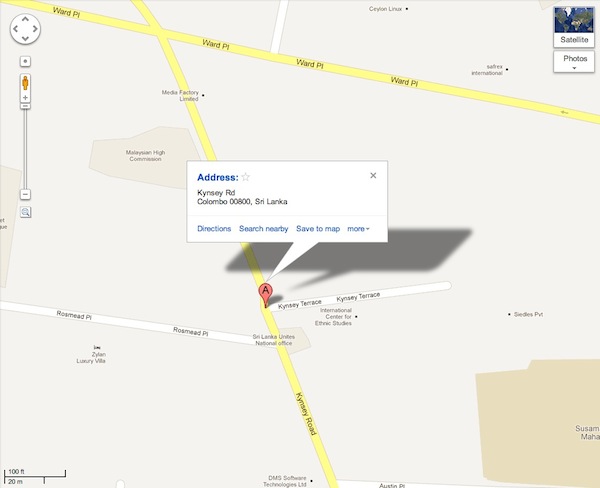 On 27 July the painting was once again done on the Kynsey Road-Kynsey Terrace junction in anticipation of Neelan Tiruchelvam’s death anniversary on the 29th. As in all previous years, clearance was obtained from the Cinnamon Gardens Police. Furthermore, two police officers from the Traffic Division were provided while the road painting took place.

On 2 August, at around 10.45 pm a truck was seen driving up Kynsey Road and around 15 men alighted. One poured a black oil-like liquid on the painting while another poured sand. Despite this the painting, its colours now muted, could still be clearly seen the following morning. A police complaint was lodged with the Borella Police on 3 August.

On 3 August at around 8.30 pm a second attempt was made by around fifteen individuals, all dressed in civilian attire, including some in track suit trousers and t-shirts, who placed orange traffic cones around the area and poured tar on sections of the painting. They waited until the tar had dried before leaving the site within an hour. There were two vehicles parked nearby, a white truck that had the sign ‘Road Markings’ across its windscreen, and a military white jeep with two military personnel in uniform seated inside, both of which left with the rest. Most of the painting has now been obscured, what has been left untouched is the Sinhala section of the text (Jeevithaye Shreshthathvaya Rekaganimu) while the Tamil and English (Vaalvin Puniththathai Uruthippaduththuka and Secure Sanctity of Life) have been obliterated.

This account is from a background note prepared by a source based on eye witness accounts of the incident which was given to Groundviews and other media actors. A video on this horrible act, unequivocally condemned by Groundviews, was produced by Vikalpa (in Sinhala). They have also put up a story in Sinhala about it here.