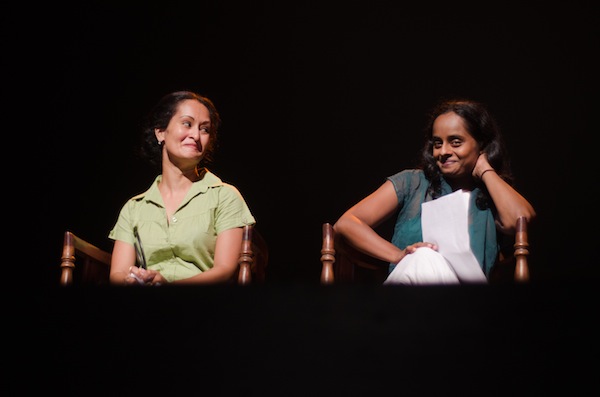 Cast as mother – A reading produced by Stages Theatre Company is a work in progress and therefore poses a unique challenge to the reviewer. How does one review a piece of theatre which is a fragment and when we as an audience are told that this is only a prelude to the actual play? But this might well be one of the fundamental features (and strengths) of this project. It is a metaphor for the processes through which this piece of theatre has evolved and is evolving—for the women involved in this project time is a precious commodity and they take what they can when they can and wherever they can.

The reading at the Wendt on 24th evening staged selected parts of a multi-author, bi-lingual script writing exercise that took place over one and a half years and sought, in part, to inform the audience of how this entire project was conceived and executed. The episodic, scattered and spontaneous nature of the performance, which lacked any single overarching theme or unity in terms of structure, reflected the joys, frustrations, stresses and the very incoherency of the lives of its main protagonists—women of the theatre whose professional theatrical lives were interrupted by motherhood now returning to theatre and making that return an occasion to critically and unabashedly reflect on motherhood.

If motherhood in Asia, and especially in Sri Lanka, is one of the prototypical roles which frame the lives of women Cast as mother effectively explored the multidimensionality of the lives of these women, irreducible to this single socially-sanctioned role. It was not however a breast-beating militant railing against society’s attitudes to motherhood but a sensitive and emotive yet equally irreverent and humorous foray into what it means to be a contemporary mother.

The audience experienced samples of five out of a total of seven writing exercises which were carried out in anonymity before the group met at the end of the project. Of these the letter writing exercise, which saw the women addressing letters to various people connected to their lives, appeared to have produced some of the most compelling responses.

The letter from a young mother to her own mother was a poignant reflection on the frustrations and insecurities of a woman new to the role of motherhood looking for recognition and understanding. Perhaps the strongest piece of this segment was the letter addressed to a principal. The hyperbole of a cowering mother faced with the prospect of explaining her son’s absence from the first day of school to an authoritarian principal was a biting satire of the insensitivity of authority figures like doctors, health care workers, teachers, etc that mothers have to encounter and placate on a daily basis. To them the mother is an insignificant individual shorn of individuality—a timely reminder perhaps, beyond the immediate theme of motherhood, to such professionals of the humanity of their “subjects”. The mistress-maid dialogue was less convincing because while it had the potential to be a powerful statement on class difference and privilege the empathy between the maid and the mistress-mother had a politically-correct gloss which lacked the emotional intensity and authenticity of the other letter exchanges.

The “lists” segments of the performance saw the ubiquitous domestic list, a humorless piece of paper which is a daily reminder of drab domesticity, being transformed into a series of profound and profane statements on life and society. The women were asked to list the great truths and lies they had learned as mothers and what they would pass on to their children and what they would hide. While it evoked humour this segment held less appeal, primarily because it didn’t have the capability for sustained reflection and dialogue like the letters.

The bi-lingual nature of the production was refreshing. In a context where traditionally creative/literary activity has remained segregated Cast as mother used the bilingual mode effectively and unselfconsciously with quite a few of the actors switching smoothly between Sinhala and English and using mixed code freely. This reviewer, however, felt that there was a slight degree of formalism in some of the Sinhala dialogue while the English material had a more colloquial tinge. There also seemed to be an implicit bifurcation in terms of agency between the English-speaking mothers and their Sinhala speaking counterparts – whether intended or unintended was unclear. The Sinhala speakers seem to appear more in victim mode while their English speaking counterparts, though equally victimized, appeared more assertive.


The constantly “interrupted” nature of a mother’s life–both figuratively and literally–was encapsulated in the hilarious ‘adult’ nursery rhyme performed by the cast. The rousing song depicted the sexual frustrations of early motherhood but was also refreshingly frank in challenging the stereotype of mothers as a-sexual beings. It was also apt that the performance ended abruptly—reinforcing the fragmented, sporadic nature of a mother’s life while also tauntingly promising a juicy excursion into the subject of sex but never delivering on that promise.

As a whole Cast as mother is a brilliantly conceived project which brings together some of the finest female talent in the Sinhala and English stages. This multi-dimensional exploration of motherhood and female identity in general should find broad appeal outside Sri Lanka as well—especially in the Asian region where rapidly changing lifestyles are bringing traditional female roles into increasing conflict with the desires and aspirations of contemporary women. One can look forward with anticipation to September when this “work in progress” will reach maturity as a fully-fledged play.