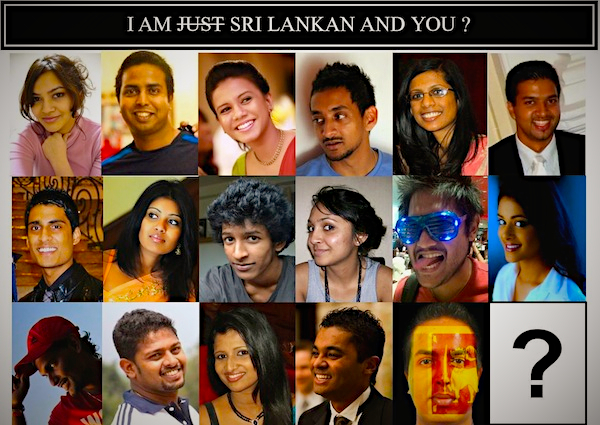 Few are those who believe in the existence of what I would like to call a post-war Sri Lankan identity. Indeed, most of us will identify themselves according to their ethnicity, some according to their religion, beliefs and aspirations and some according to their country of birth. Yet, the fact is that we do not belong to just one category or another. We are different from each other and at the same time we carry diversity within ourselves. Each of us is a unique combination of various identifications that are not equally significant to us. So how does one define the schizophrenic notion of identity?

In a sociological sense, one could say that identity defines who we are and who we want to be. It also defines where we come from and where we go to. Yet, identity is not necessarily something we inherit or something inherent to us. It does not axiomatically combine shared values, beliefs or concerns. To say that one inherits a certain identity –whether it is the Sri Lankan identity, the Sinhala or Tamil identity, the Islamic or Christian identity- is inaccurate (at least partially). Identity is also something we built/build within ourselves as individuals. It also has to do with the way others perceive us and vice versa. The very shape of our identity therefore tends to evolve throughout our life, depending (to a considerable extent) on the environment we are in.

The struggle for identity is something we all experience at some point of our life; either as individuals or as a nation. Depending on each individual or group, there will multiple (Sri Lankan) identities. Hence the necessity to define a common identity, one that will incorporate our socio-economic differences but also our religious, political, cultural and geographical similarities and differences, one that will ultimately give us a stronger sense of solidarity and tolerance through multi-ethnicity.

Today, despite tremendous efforts to rebuild the North and East, the country is still split psychologically into two. The fracture between the North and the South remains and most importantly, reconciliation is still lagging. So what better cause than peace to [re]build a Sri Lankan identity?

From a post-war perspective, how can we define what it means to be “Sri Lankan”? Most importantly, how can we find a commonality that will enable us to build an inclusive and homogenous identity, one that will include our diversity –both as individuals and as a nation?

Post-war Sri Lankan or how to “rebrand our identity”

In marketing, before rebranding a product, one has to be clear about the issues that are to be solved. What is the vision of the enterprise? What does it expect 5 or 10 years from now? And most importantly, how can this vision be achieved?

If we consider the Sri Lankan identity as a product and apply to it the above mentioned strategy, then one has to ask himself what the vision of Sri Lanka is. What do we, as individuals and/or as a post-war nation, expect a few years from now? Mostly, how do we build a common identity (if such a thing really exists)? This requires a fundamental shift in mentalities and behaviors that only the younger generations will collectively be able to achieve by building their own ideology, one that will enable them to share an identity that will transcend their own diversity in order to establish a sustainable peace in the country.

But what does being a post-war Sri Lankan mean? Today, to be a Sri Lankan is contextually different from what it used to be three decades ago or even two years ago when the war ended. It might even be different a quarter century from now. However, given the current post-war situation, [re]defining the Sri Lankan identity is not merely a necessity; it is also a prerequisite to reconciliation. One cannot talk about reconciliation without talking about identity issues, equality or discrimination. This is especially true if we consider the fact that our country came out of a protracted civil war, a war between its own constituents, citizens. Studies show that today: “No other factor in this century has caused so much misery to so many people as religious and ethnic intolerance. No other single factor is responsible for such extensive and protracted violation of rights as ethnic conflict”. (The Right to a Culture of Tolerance, Report of the Advisory Commission, The Commonwealth Human Rights Initiative, chaired by Dr. Kamal Hossain, 1997, p.18)

If there is such a thing as being a post-war Sri Lankan, are we talking in terms of nationality and in that case does being Sri Lankan means belonging to the Sri Lankan nation? But again, can we consider Sri Lanka as “one” nation or isn’t this so-called nation scattered into pieces both inside and outside the island? Or as the Oxford dictionary defines it, is identity “the characteristics determining who or what a person or thing is”? In that case, are we talking in terms of geography, ethnicity? It seems to me that both notions are pieces of the same puzzle; the missing pieces being the indispensable center-piece i.e. the common denominator characterizing us as (post-war) Sri Lankans.

One also needs to identify what he/she wants to do with this “new” identity. Defining the purpose of such a notion is indeed essential. I believe that the search for a common identity is part of the solution to the existing post-war stagnation. Though commendable, so far most of the post-war efforts were put into material infrastructure and tourism whereas the concept of identity-building is as important (if not more) in terms of nation-building, reconciliation, peace and stability.

Reconciliation policies through the promotion of multi-ethnicity

“A State which recognizes the multiple identities of individuals and groups is more likely to ensure peace, stability and development than a State which espouses narrow sectarian ideologies.” (Ibid, p. 40)

The role of the State is pivotal in terms of identity. Over the years, Sri Lanka has struggled and not satisfactorily succeeded, to fuse its diversities into a melting pot of its own; a pot that has however proven to be extremely fragile. So how does a State overcome the fragmentation of its own identity?

Public policies implemented by the State are necessary to shape a new identity as part of the peace-building process. Not only will it function as an accelerator in terms of socio-economic development and international recognition but it will also have a major psychological impact on the citizens by ultimately reinforcing their “Sri Lankan-ness”.

This requires the promotion of social equity between all ethnic and religious groups; starting from a reform of the education sector. Inequality, known as a major cause of marginalization in all societies, is first experienced at school. No public school should be used as a platform to promote or privilege one religion over the other. Instead, emphasis should be put in teaching human values and ethical principles since primary schools; a concept valued by organizations such as UNESCO. This goes for the State as well. Buildings, no matter how architecturally uncommon they are, will not help in building inner peace among Sri Lankans. Instead, what we need is to showcase our diversity through the enforcement of multi-ethnic public policies. Language, for instance, should not be a barrier in either obtaining an employment or in our everyday life. If we are unable to communicate with our own people and especially in our own country, then how are we even to discuss about social equality?

French Enlightenment thinkers such as Voltaire, Diderot and Montesquieu would have agreed that the concept of secularism is part of the solution. We, Sri Lankans, have given far too much importance to the practice of religions and not enough to spirituality; a notion that the Buddha himself tried to inculcate us: “Peace comes from within. Do not seek it without”.

Frustration due to discrimination or rejection often excludes minorities, pushing them further away from the larger society they live in. Such marginalization often builds the need to find a new and somewhat irrational identity. The inclusion of the minorities as well as the Diaspora is therefore essential to build a better Sri Lanka.

The lack of a homogenous identity engenders the risk of exclusion and discrimination whereas there should not be competitiveness between and within communities. If we actually consider ourselves first and foremost as Sri Lankan, then no distinction needs to be made between individuals that are part of the majority and the ones that are part of the minorities.

While some might perceive our diversity as our vulnerability, I see it as our strength. The more diverse we are the better understanding and more complete we get to be. The problem is not necessarily how we live or cohabit with each other but how we combine these multiple identities into a common identity. Ultimately, it is all about how we, both as individuals and as a group, want the Sri Lankan identity to be perceived as, and what we want to do with it.

I believe that being Sri Lankan is not giving any sort of importance to ethnicity, social, religious or geographical distinctions. Being Sri Lankan is being tolerant and understanding of one another, no matter where we come from and where we go to. Building and preserving a culture of mutual tolerance is and should be our common denominator, our common identity as Sri Lankans.

Tomorrow’s Sri Lankan is the one who builds his/her identity through the respect, understanding and tolerance of his/her diversity.

I am a Sri Lankan. And you?