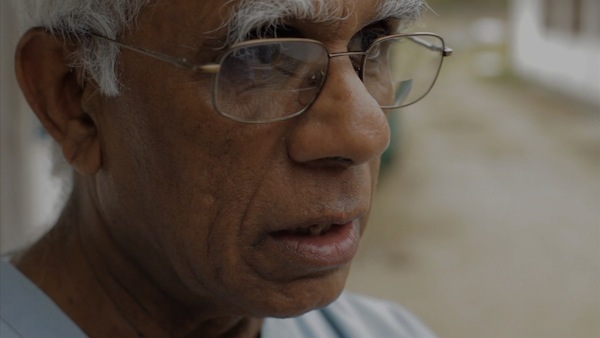 Dr. Panagamuwa’s workshop was tucked away down a corridor of the Mannar Hospital in the north west of Sri Lanka. When I arrived, the doctor, dressed in his distinctive green theatre overalls, was rushing around making sure his patients were attended to. One of the patients was Mary, a young Tamil woman whose leg had been amputated following a landmine explosion. I watched Dr. Panagamuwa check over the adjustments he had made to her new artificial limb. He spoke to her in Tamil and when he got stuck with a word or phrase, his young assistant would step in to help communicate. “I didn’t think he was a doctor,” Mary told me afterwards. “He’s not like a normal doctor.” She was in a hurry to catch the last bus home, much easier now with her new leg.

Together with both Tamil and Sinhalese doctors from England, Dr. Panagamuwa started the Meththa Foundation, a charity would focus on using his highly specialised skills. Meththa started small, raising funds through house parties, cricket matches and dinner dances. In July 2009, Dr Panagamuwa visited Mannar and having seen the number of amputees lining the corridors of the hospital he decided to set up his workshop. “War means injuries,” he told me and said that as long as there was a need he would continue to work in Mannar.

Dr. Panagamuwa started off as a surgeon in Sri Lanka, but after the JVP insurrection of 1989 he decided to settle in England with his wife and two children. “When I left Sri Lanka, apart from the new discipline, one of the first things I noticed there was the wastage of perfectly good components.” Because of regulations in England prohibiting their reuse, expensive components had been discarded. “These rules benefitted Sri Lanka,” he told me and managed to adapt them for patients’ needs here.

Dr. Panagamuwa’s workshop was divided into two compartments. In the front portion he attended to the patients and at the back, his team of young technicians worked at noisy machines, drilling holes into new artificial limbs for amputees. One thing that struck me as I watched Dr. Panagamuwa working was that unless patients voluntarily told him how they had lost their limbs, he didn’t probe into the causes. “What does it matter how the patient got injured from a clinical point of view?” he said. “We try to get them to a point where their disability is no longer the central part of their life. We want that to be behind them.” If patients did want to talk about what had happened to them he listened and tried to find out how best he could help get them walking again. “I want to treat them the same way we treat people in England. With the same ethos. Listening to people, being by their side. I tell them, Try this and see. If you don’t like it, we will give you another choice“.

Dr. Panagamuwa understood how his decision to set up a base in Mannar could be perceived by some members of the diaspora. The question why a Sinhalese doctor is working in Mannar? is one he knew was being asked by some not only from the Tamil diaspora, but also the Sinhalese community. Having spent a few days with Dr. Panagamuwa in Mannar and traveling with his team to Pooneryn, the answer was plain: because there was a need. “Some of the younger people are calling me uncle now,” he told me, “and that is the highest tribute that they can pay me”.

Editors note: For an overview of the Longing and Belonging series and trailer, please click Longing and belonging series: Diaspora shorts. Also see The science of planning in Jaffna and From London to Jaffna for the first time.