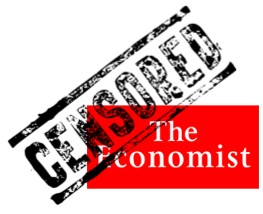 In what may be explained as an utterly fatuous action in a country that apparently has no official policy on censorship â€“ but is plagued by the arbitrary regulation and control of online content as well as print media – Customs officials have detained two issues of the Economist this year. In addition, reports indicate that several other issues of the Economist have been withheld by Customs, including two issues published in May of 2009. Similarly, in July of 2009, The Economist was withheld at Customs once again for an article, titled ‘Victory’s rotten fruits’, that commented on the distasteful triumphalism that followed the end of war in May 2009. A news report last month by the Sunday Times that obtained a statement from Lakshman Hulugalle, the Director General of the Media Centre for National Security, provides a lacklustre exposition of why foreign publications may be censored in the future:

Asked what the government policy was in detaining foreign publications, Mr. Hulugalle said if they were â€œharmful to national security”, they would be disallowed.

The application of the rationale for censorship in Sri Lanka is as misguided as the ad hoc policy in place at Customs with no clear guidelines or capacity to determine what type of content might ‘legitimately’ undermine ‘national security.’ It is discernible to any reader familiar with the articles in question that the censorship of the magazine is explicitly related to the unfortunate dexterity of heavily politicised institutions of the state to distort dissent as an act of disloyalty and further justify their irrationality with a tiresome jingoistic diatribe. The latter has perniciously marked out the acceptable and unacceptable in expression, publication, circulation and the access to information. As an institution, Customs falls under the authority of the Ministry of Finance – one of the numerous portfolios under President Rajapakse and that relation itself may be an explanation for the sporadic displays of loyalty through censorship.

However, the content of the most recent articles that have been withheld are far from a revelation and could hardly be determined as being so overwhelmingly controversial that it might undermine the security of the nation and hence warrant restriction. If these articles have any value, it is that their content reflects a critical stand against the politics and policies of the incumbent government. For the purpose of highlighting the doltish attitude by the apparatchiks of the government towards the value of dissent, a recapitulation of the most significant sections of the content in these articles would have significant heuristic value for further debate on the acceptable, if not pragmatic, limits of censorship. In ‘Rebuilding, at a cost’ the Economist notes,

‘The authorities say that land will be dished out through open tenders. But local leaders fear plots will instead be handed to henchmen of the president, Mahinda Rajapaksa, most of whom come from the Sinhala-dominated south. Demands for preferential treatment for the inhabitants of Trincomalee, whether Tamil, Sinhala or Muslim, may fall on deaf earsâ€¦A soldier on the road to Mutur says government officials visit regularly, adding disgustedly that he is forced to salute the likes of Vinayagamoorthy Muralitharan, a former LTTE leader who is now deputy minister of resettlement, whereas â€œwar heroes” like the former army commander, Sarath Fonseka, languish in jailâ€¦A wider crackdown against the opposition seems to be under way. Also on August 13th two MPs from Mr Fonseka’s Democratic National Alliance were arrested during what they called a â€œpro-democracy” protest. Police wielding batons and firing tear gas charged the demonstrators. The country may be developing after the war, but democracy still looks frail.’

Following the passage of the Eighteenth Amendment, last week’s issue of the Economist highlighted in an article titled ‘Eighteenth time unlucky’ that,

‘Indeed, whatever problems Sri Lanka’s political system suffers from, the weakness of the presidency, which is already directly responsible for over 90 institutions, is not one of them. Quite the contrary: Mr Rajapaksa himself, before he tasted its benefits first-hand, used to campaign for the abolition of the executive presidencyâ€¦ Such important changes should have been put to a referendum. Mr Rajapaksa might well have won one. But a campaign would at least have thrown the issues open to public debate and scrutinyâ€¦That he has preferred to put the consolidation of his family’s power ahead of a sorely needed national reconciliation with an aggrieved Tamil minority is a decision Sri Lanka will repent at leisure.’

Emphasis ours. Perhaps after carefully reading every single article in every single copy of the Economist, Customs have now released the issue.

If our patriotic policy-makers persist with the principle of ‘national security’ as a justification for the proscription of the content above, then it is worth questioning both their judgment and intelligence with reference to two specific points. Firstly, it is incomprehensible that the content covered by the article on the Eighteenth Amendment can undermine national security, given that the verbal jousts in parliament, reportage by citizen and mainstream media have exhaustively covered similar criticisms and opposition to the bill by intellectuals, lawyers, journalists, independent analysts and political parties. In addition, the article on the perils of post-war development, with its relatively mild references to nepotism and the stifling of the Opposition, hardly poses any sort of threat and it would be sophomoric to argue that the content could possibly cause insecurity.

Secondly and in congruence with the latter point, the demographic that actually read the Economist in Sri Lanka is, unfortunately, significantly small and further, even if the Economist print edition is consistently detained by Customs in the future, it will still be accessible on the web, emailed around, posted on blogs, linked to on other websites and printed in other mainstream newspapers. The wider implication in the continuation of this bootless and inane policy would be the resulting erosion of public trust in the institutions of the state, especially when responsible and pragmatic policy-making appears to be so demanding that it ceases to exist.

It follows that while holding up issues of the Economist at Customs does nothing at all to impede the dissemination of the magazine’s engaging content amongst subscribers in Sri Lanka, it does have two unintended consequences for the Rajapakse regime. One, as a consequence of censoring a specific issue, it becomes far more popular than it would have had its sale and dissemination in print form been allowed in the country. Secondly, every instance a copy is banned, domestic and international scrutiny on post-war censorship in Sri Lanka gets a vital boost.

It is quite clear that the remnants of an arbitrary and inchoate war-time policy on censorship continues to exist and is derived, if not complemented, from the occasional inability of the government to tolerate dissenting views. In this specific case of censorship it appears that officials and the apparatchiks of the government have misinterpreted dissent towards the government as an attack on national security or worse, they may zealously believe that any dissent towards the government might actually undermine the security of the nation. In any case, following a miraculous improvement in comprehension on the part of all authorities concerned in this matter, inquiries need to be made regarding the utility of enforcing an unofficial and what is ultimately an ineffective policy with clear partisan interests; the lack of any acceptable reason provided by officials for withholding the Economist; and the guidelines, if any exist, that have been provided to the Customs officers. Unfortunately, in the hopeless anticipation of a response from the grand arbiter, it is entirely certain that we might have to endure an inordinate delay for a response, the insult of a lack of response and the prolific ability of authorities to feign ignorance.