Today, the UNP, the SLFP and the JVP have zeroed-in all their resources to the Sabaragamuwa and North Central provinces.Â  Ministers, Members of Parliament and the Pradeshiya Sabha politicians across the country have all been entrusted with specific tasks in this provincial council election campaign.Â  These tasks are based on their individual capacities. Some of them strategize the campaign, some others speak at the rallies while others -unskilled labourers – have been assigned the popular traditional tasks of intimidating and harassing their opponents which has often been effective in election campaigns in Sri Lanka.Â  This shows the utmost importance that political parties have placed in the upcoming provincial council elections.Â  Does this mean that parties and politicians are serious about getting to the regional politics or is it all about paving their way to power at the centre?

However, though the provincial councils system might not offer the desired and ideal autonomy for regional communities, it was considered to be a starting point for the devolution of power. If provincial councils were given the powers described under the 13th amendment, the role and the outlook of those councils would have been very different to what they are today. For example not only areas such as education, culture and health but even powers like the police should have been under the authority of these councils. If one examines the reason for this situation, it is not only the case that the centre was not ready to devolve their power but the regions too were not eager to demand these powers. Â Therefore, the puzzle here is, WHY are those who were not enthusiastic in strengthening the powers of the provincial councils or those who sometime ago denounced the system are now ready to fight with full force to grab the power in those institutions.Â

Over a century of British rule and sixty years of Colombo-centric democracy has left no room for decentralized imagination amongst the majority. Thanks to the Sinhala chauvinist politicians the word ‘devolution’ has been contaminated with the idea of ‘secession’ and therefore any discussion over devolution of power is simply unpatriotic if not traitorous.Â  Both the UNP and the SLFP who ruled the country consecutively, attempted to introduce a certain degree of decentralization in response to the demand of the minority community, often as a part of electoral alliances. However, many such attempts were abandoned by these parties soon after their electoral victory in the face of Sinhala Buddhist protest. Â Whatever little successes were largely limited to an administrative decentralization rather than a political power.Â  However, quite interestingly the decentralization was exclusively a minority demand and frequently discussed in the context of conflict resolution. Â For example, the results of the State of Democracy in South Asia survey conducted in 2004 shows that it is mostly the people of the Northern and the Eastern Provinces who prefer the idea of giving more powers to the region by reducing the powers at the centre. This further crystallizes with the finding that over 75% of all ethnic minority groups support the proposal of granting more powers to the provincial councils while only 34% of those from the Sinhala community extend their agreement in this regard. Â Unfortunately this debate completely missed the arguments of development, equality and greater democratization in the concept of devolution of power. This is further vindicated by the above survey results that state that the people of the Uva province – the least developed province outside of the North and East that contribute only 4.4% of the GDP – are the least susceptible to the idea of granting more power to the provincial council at the cost of power at the centre.Â

There is a belief that a smart politician who starts his/her political career at the local council should end up in the parliament. I once had a conversation with a young provincial councilor of the Southern Province at a workshop on federalism. He was of the opinion that the people who stuck to the local or provincial level politics were the less capable ones. Therefore according to him provincial council membership is the second step of a triple jump for any politician to Parliament. The results of the survey conducted by the Institute of Professional Public Administrators (November, 2007) on the provincial councils vindicates this idea to a great extent. This report states that 29% of provincial administrators think that provincial councilors take trouble to get elected anticipating future political goals. These national ambitions of the regional politicians are understandable under the context of a highly centralized legislature and political party system. Irrespective of where it is located, all lucrative and powerful institutions are under the preview of the politicians at the centre. So, members of the central government have access to the projects and institutions that can be used to grant jobs to their constituency and contracts to their political clients that ensure his or her political future.

The party structure too is highly centralized and decision making always flows from top to down. Irrespective of whether it is a cardre based or mass based party, the central leadership of Sri Lankan political parties enjoys unprecedented authority.Â  They decide who should be given the candidateship or other positions in the district or province instead of letting the constituency chose. Being loyal to the leadership and his or her ideology irrespective of the opinion of the constituents is the essential and necessary condition to progress within the party. The defeated parliamentary candidates are often given candidacy for provincial councils and local authorities. Therefore, usually provincial politicians are often one step below parliamentarians and this culture obviously sets the competition for the centre than the regions. Hence, there is no motivation for the politicians to struggle for a stronger regional authority. Â Â 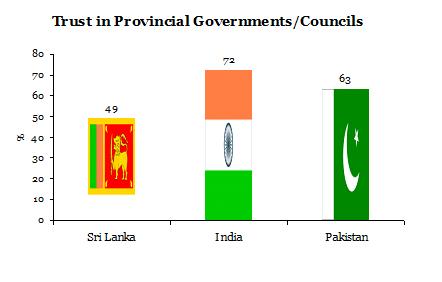 In this context the current prominence that the main political parties have given to the two provincial council elections pose an interesting puzzle; why have they decided to venture into an expensive election campaign for relatively powerless regional positions?

Our infamous sport, Cricket could shed some light on this million dollar question. Usually when another cricket team reaches Sri Lanka for a tournament, a couple of practice matches are always arranged by the hosting cricket board.Â  The purpose of these matches to the touring team is to learn the condition of the pitches and the condition of the grounds of the hosting country. They try to play well, as it will boost their team’s confidence as well. On the other hand the players of the manager’s team get an opportunity to exhibit their skills and qualify for a place in the national team. In those practice matches no trophy is awarded nevertheless it allows players to achieve individual advancements. This scenario explains the current provincial election competition to a great extent. The only difference is that unlike in the practice cricket matches these elections are held spending a colossal amount of public funds and at the cost of the citizen’s spirit of democracy.Â  Because no matter how powerless and ineffective the institutions concerned are, Sri Lankans tend to vote in most elections as they perceive that voting is more of a duty than a right.

The two provinces can be considered as two different cricket pitches. The North Central Province’s pitch seems to be best for the bowlers who can throw a ‘nationalist’ spin.Â  The strategy of the UNP is to use the war veteran to reunify its scattered- due to the liberal policies- voter bases and infiltrate the frustrated SLFP constituencies.Â  However, it should be noted that for someone from Colombo to compete for the chief ministerial candidacy in the north central province chiefly based on his past military record hints that his political ambition is in national politics rather than in the province. On the other hand the previous chief minister of the province seems to have lost the confidence and the support of his party higher ups perhaps due to his past criticism of the central government. Â This indicate that SLFP is looking for someone with national ambition and loyal to the centre to be crown as the next chief minister. One the other hand the JVP may be contesting because it is not an option for them anymore. So, following the footsteps of Mr. Rauf Hakeem, the chief ministerial candidate of the JVP would return to the parliament seat soon after the election.

Sabaragamuwa plays a completely different kind of match. The entertainment of spectators has become a serious concern for the parties. So UNP has found local MGR – a popular actor turned chief minister in Tamil Nadu- from Wattala to contest in Sabaragamuwa. This strategy doesn’t seems to be a Â bad idea, as some people have already started betting on the candidate by turning the election campaign in to some kind of horse race. On the other hand this election will pave the way for family members of the national politicians to have their debut in politics. Minister wanniarachchi’s husband and Minister Siyambalapitiya’s brother are some of the individuals who will be baptized at this election. Â  Â Â

What does this mean? Will this election strengthen the provincial council system and allow the councils to bargain with the centre to get the powers that they are entitled to? Or will it be a practice match for the government to test its political popularity while the opposition selects its national level players and spark a momentum for a future victorious campaign? Â

I guess the latter!