The final results of the rough-and-ready Groundviews poll are now available here.

The wording was taken from CPA’s Peace Confidence Index (PCI) poll, of which the ethnic breakdown for this same question from the latest report in November 2007 shows an interesting and significant divide between the Sinhala and the Tamil, Up-Country Tamil and Muslim communities. 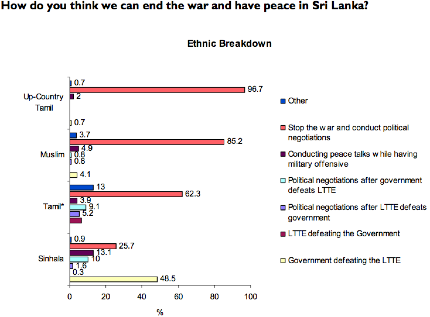 Some of the comments submitted to the “Other” field in the Groundviews poll were:

change the face of politics in this country, and tempt the more conscientious.

Simple word – Sharing. IF we could learn t oshare this war will stop.

Simultaneously, stop the war and stop all structural violence against the Tamil

Only way to solve the problem is to separate the country.

Kill Prabhakharan, offer a political package to all minorities and negotiate

The Opressed need to have their DIGNITY restored, then peace is automatic.

It cannot be ended

Stalemate. Intermittant fighting with no major advances by either side.

The poll also generated some interesting commentary as well, which you can read here.

The Aftermath: Aluthgama Three Years On

Bias in the Dias affair: A reflection

Commemorating the anti-Muslim violence of June 2014: An urgent call for accountability and reconciliation