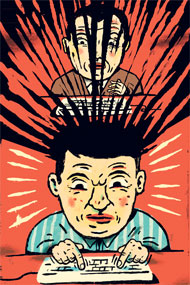 Chatroom, directed by Tracy Holsinger and produced by Mind Adventures Theatre Company, was a refreshing departure from banal productions that usually feature in Colombo. Dealing with suicide and online communication, the script by Enda Walsh, an Irish playwright, explores the understanding of and responses to depression, suicide and ultimately, human relationships of six teenagers brought together in Internet chat rooms.

The deplorable and never to be repeated, I hope, projection of commercial advertisements before the commencement of the play aside, Chatroom was, as is to be expected from Tracy Holsinger, engaging theatre and personally, a deeply fulfilling return to her directorial style after 3 Star K at the Wendt in 2003, the last stage production of hers I saw before leaving Sri Lanka for a while. Having explored for the past couple of years the representation of suicides in the mainstream print media in Sri Lanka, I found the play to be a very interesting take on the issue and our responses to it. Chatroom, as the moniker suggests, approaches suicides through the lens of Internet chat rooms – places where with relative ease, anyone with a PC and an Internet connection can engage with topics and issues as diverse and perverse as the human imagination. Chat rooms can be at once engaging and frightening, faceless yet full of character, distant yet palpably close and real, and often perceived to be, by those who frequent them regularly, a real connection to a world beyond the confines of one’s own occasionally claustrophobic life and relationships.

Escape through death is a leitmotif in the production. Jim, played by Brandon Ingram, actively seeks it. Laura, played by Tehani Chitty, found it and yet returned to (a) life. Emily, an essentially good / moral character played Subha Wijesiriwardene attempts to vitiate the influence of the wickedly engaging William, played by Arun Welandawe-Prematileke and Eva, played by Erasha Sugathapala on Jim. Emily is helped, to an extent, by Jack, played by Ruvin de Silva, who is caught between a desire to be accepted in the chat-room and his conscience, alerting him to the grim telos of participating in William’s cruel mind-games. As the Director’s note avers:

Ã¢Â€ÂœThe sense of freedom that comes from being faceless and nameless can be exhilarating, can make you more daring than in your everyday interactions with people.Ã¢Â€Â

Morality in online communications & relationships is complex and fluid. Chat room patrons may never know, meet or see the face of their greatest detractors, or indeed, their closest friends. Coincidentally, a recent article in the New York Times explores the phenomenon of intolerance and hate speech online (flaming) through the emerging field of social neuroscience – looking into what goes on in our brains when negotiating largely anonymous, online communications and the relationships built thereupon. As the Daniel Goleman writes in Flame First, Think Later: New Clues to E-Mail Misbehavior (NYT, 20th February 2007):

Ã¢Â€ÂœFlaming can be induced in some people with alarming ease. Consider an experiment, reported in 2002 in The Journal of Language and Social Psychology, in which pairs of college students Ã¢Â€Â” strangers Ã¢Â€Â” were put in separate booths to get to know each other better by exchanging messages in a simulated online chat room. While coming and going into the lab, the students were well behaved. But the experimenter was stunned to see the messages many of the students sent. About 20 percent of the e-mail conversations immediately became outrageously lewd or simply rude.Ã¢Â€Â

Chatroom explores these complex issues through a script that attempted to unravel the complex interplay of emotions, conviction and action through the words and ideas that are exchanged between six characters online. Regrettably however, in largely sticking to stereotypes, the production did not fully explore the ways in which online communications can subvert and change our perception of identity and belonging. The characters, for the most part exceedingly self-centred, never really grew to appreciate the viewpoints of each other. Perhaps indicative of a dominant aspect of the medium of a chat room itself, it does not however, represent the chiaroscuro of emotions and rich textures of many relationships online. Each of the characters attempt to mirror a certain dimension, or character, of a typical chat room – William for instance with his twisted logic and opinionated self-indulgence, Laura with her quiet resolution and Jim, searching for belonging. Chat rooms however are more than the sum of each of these characters. Simplifying thus the range of human interaction online, we are never fully satiated as to whether Chatroom is a distillation of what transpires in chat rooms, or whether it is in fact, far removed from reality. Also unsatisfactory was the denouement. Jim’s pontifications on suicide towards the end of the play were tedious and contrived. It is almost as if the playwright, through Jim, wanted to proselytize life over death, and drill in the message that suicide is terrible and unnecessary. It may well be, but surely the audience can make up its own mind? Furthermore, that Jim and Laura find commonality in furry bunnies at the end of the production is heartwarming, but I’d much rather an ending that didn’t smack of Grimm’s fairy-tales. Also, better use of the advanced lighting at the British School Auditorium could have brought on to stage, life passing by in front of a computer monitor by better indirect lighting to create ambient hues on the faces of the chat room participants.

These remain minor annoyances in a production otherwise extremely fulfilling. The cast, for many of whom this was their first mainstream theatre production after school, all delivered above average performances. Tehani and Arun, playing Laura and William respectively, clearly stood out for what were finely played performances of two characters, very different from each other, central to the leitmotifs and the action of the play. Tehani’s light touch in her sensitive portrayal of Laura, a complex character torn between her own traumatic personal experience and the desire to prevent another suicide, clearly had an edge over the other characters, save perhaps for William. Arun was brilliant in a sublime rendering of William, an opinionated young prick with scant regard for the trauma of others save for his own, twisted enjoyment. Brandon’s enactment of Jim, a depressed, lonely teenager with an obvious alcohol problem in need of counseling was adequate, but not entirely convincing. Ruvin, playing Jack, was again not entirely comfortable with his character, playing it with varying degrees of alacrity in the production I saw Friday night. Emily, played by Subha, I am told by her mother, was essentially herself in the play! But her character, perhaps the only Ã¢Â€ÂœgoodÃ¢Â€Â one in the play and the most uni-dimensional, was not one that I found particularly engaging, which is a pity since Subha’s talent far exceeds that which we saw in Chatroom. Played by Erasha, Eva, was acted out extremely convincingly even though next to Emily, I found Eva’s character to be the flattest and least developed of the lot.

I came into Chatroom expecting it to be a play aimed very much at a teenage audience, with necessarily, a light treatment of social concerns. I was pleasantly surprised to discover the contrary – that it was a transcendent dramatic exploration of some of the most pressing issues online and in the real world today. Tracy’s notes in the programme brochure tell us that it was not the intention of Chatroom to send us back home thinking that life is a piece of cake. Clearly, producing Chatroom would not have been a piece of cake either, but we are happy that it was so well baked and served. Having tasted it, we can only want more.